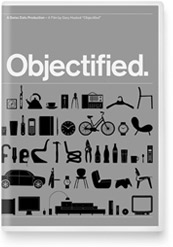 When I stop and think about it, Objectified is the film that made me want to be a filmmaker. I first saw this extraordinary film last summer at Northwest Film Forum. This film spoke to me where I was at at the time: in the middle of making a “talkumentary,” and wondering how the hell can you make interviews interesting? This film is one lovingly crafted answer. Gary Hustwit gave me something to aspire to. Like the objects it portrays, it’s a work of art. I purchased the DVD last week so I could screen it again, and it’s a reference I plan to return to a lot. It’s that good.

Granted, if you’re not a design lover, you might not love this film the way I do. It does appear aimed at a specific audience – people who are predisposed to own Apple products, BMWs or designer furniture. But thanks to Target and Ikea, this audience is bigger than ever. And I take it as an article of faith that this type of film will be made more and more in the future, as audiences become even more niche, and filmmakers aren’t afraid to do what Hustwit did – start his own distribution company (Plexifilm) to reach them. Bravo for stepping out of the mainstream to make something remarkable for those of us who can appreciate it.

Synopsis: Objectified takes a reverent look at the well-designed things in our lives through the eyes of the people who design them. Seamlessly stringing together interviews with industrial designers like Jonathan Ive (iPhone), Karim Rashid and Marc Newson, it is a pean to the clever men and women who turn cell phones and kitchen chairs into objects of desire.

Story Structure: This film is more a meditation than it is a story. It’s more poetry than it is narrative. And it’s proof that – at least for someone interested in the topic – you don’t have to launch a story train to keep an audience’s attention: you just have to pick a visually compelling topic, get access to its most famous and well-spoken practitioners, come up with a clever way to link the interviews (more on that below) and have a lot of frequent flyer miles.

Cinematography: I especially liked how the interviews were set up. They appear to be all natural light, but a few are not – I could tell that a nice big softbox or other very soft source of light was often used to bring up the faces of the interviews against the white walls that they are often shot against. But most of them are lit with available light, most often window light, frequently with white walls as a background (or possibly against a white backdrop) that are rendered light grey in the exposure. Where possible, interviews were shot with the designer’s workspace as the background, or in designer’s home surrounded by their favorite objects.

The interviews are intercut with many details shots (taken at same time as interview) with subject handling their favorite objects (ie, Ive turning a mac on, closing the lid, playing with milled metal).

Interviews are always shot on sticks, but usually fluid – with camera operator following the movement of the person gently to keep them filling the frame. Lots of reframing is hidden by b-roll, but we get nice series of wide, medium and close shots for most of the subjects to keep it visually interesting. And clearly, a lot of attention was paid to the backgrounds.

B-roll is simple and beautiful. For example, to get into the Target interview, we have a brief sequence of shoppers at Target, which ends with a shot of an idle checkout machine at Target on which the Target logo is bouncing around the screen in screesaver mode. And when we’re hearing from the car guy, we see this intimate very extreme telephoto shot looking right into people’s cars at their faces as they drive by (you can bet they didn’t get releases for those shots, yet another reminder that releases are NOT always necessary for docs).

The use of slightly slow motion is visually interesting, and at first I didn’t even notice that it WAS slow. But it is – no more than 50 percent, possible just slowed 25 percent, but enough to really render beautiful the crowd scenes of people walking while talking on their cell phones, etc.

I noticed that some of the interviews broke the convention of having the interviewee look between the camera and the key light source. Reminder that if it looks good, it’s OK if it doesn’t follow convention.

There’s not a lot of fancy camera movement in the film. Just a couple scenes come to mind, when there’s a twisting camera pan into a trash bin, and another tilt shot revealing how much trash there is in the bin by traveling from bottom to top slowly. Like the best design, the camera work in this film is a reminder that less is often more.

Editing: The pacing and rhythm of this film is magnificent. It opens with the sound of an assembly line robotic machine, which after a few seconds of black, fades up to reveal the machine at work in a series of locked off shots, in which all the motion comes from the machine’s movement. We hear Jonathan Ive’s voiceover, speaking reverentially. We feel that we are witnessing creation. The camera doesn’t budge until later in the sequence, when the pace picks up, and the camera finally begin to move with the machine as the music picks up the pace. Fucking brilliant editing and shooting, that.

Another thing I noticed: At critical points in interviews, there’s an edited pause in which an object which is being discussed is shown, to give us time to look at it for a few seconds, before the dialogue is continued. This doesn’t FEEL like an edited pause, but it is intentional. You can just tell, because the pacing is too perfect.

But the most brilliant thing of all with regard to editing is the way the interviews are linked to each other. Throughout the film, they are generally linked like so:

Interview 1: Interview ends with woman talking about using shears, holding a pair of shears in her hand.

Interview 2: Begins with wide shot of next interview subject clipping hi bonsai tree. Snip! You have them linked. Ends interview with guy saying: the company that is doing the most impressive design work now is Apple.”

Interview 3: Cut to Apple’s Jonathan Ive talking with obvious devotion about how they mill MacBook Air frames out of slubs of aluminum.

This seems clearly intentional, and I’m guessing Hustwit peppered each interviewee with one or more questions about one or more of the other designers they are interviewing for the film, so they’d have something to use in the edit as a bridge.

The sickest transition of all, though, has to be how we get into the interview with the Tokyo designer, who designed a cd player that is mounted on a wall, with a string to turn it on and off, which you pull like a light switch. The scene starts with music playing in the background, and begins with a tight shot of the disc spinning. Then we slowly zoom out, until we see the string hanging (against a plain white wall). Then we see an arm come into frame, and the string is pulled by the designer. Click. The music ends abruptly. And the interview begins. Transitions like that rock my world.

Displaying products: A series of products are shot on white seamless, and then whip-panned from one to another (skipping several adjacent products to get to the one we’re targeting). This looks like an editing effect, rather than an actual whip pan, but hard to tell for sure. It’s very effective in generating a sense of energy in what would otherwise be a fairly static parade of objects. Clever.

There’s one visibly archival clip in the film – and it’s of noticeable lower quality than the rest of the footage, showing a hamster controlling a vacuum cleaner (which looks like the kind of thing that would attract a lot of views on YouTube, which is probably where Hustwit found it). Not sure whether this was necessary, really – I probably wouldn’t have included it because it brings the quality of the film down for that clip. But if Hustwit can include YouTube clips in his film, it gives me confidence to include them too.

Simple line animation: There’s very little animation in the film, but a couple of scenes are built from pen strokes, by starting with a sketch from one of the designers, and isolating each element, then building it up from it’s simplest element. For example: Starting with an arrow, a shape is added, then another line, until we see the completed object drawing. It’s a very simple kind of animation, and works very effectively.

Music and Sound: Brief electronic riffs frequently come in under voiceovers and to announce new sequences, and to support the sense of “we’re going somewhere special now.” It appears they used a lav mic for the Rashid interview at least, because on the extras section of the DVD, you can see the black wire trailing out of his shirt, and he’s moving around and it’s making distracting noises because it’s rubbing against his shirt and chest. I’m surprised they used a lav, frankly – why not just mount a mic overhead on a boom arm? Maybe because they were traveling as light as possible for the interviews? But the sound in the actual film is very high quality, so this is more of a clue to how it was achieved than a criticism. Some of the interviews are fairly echoing because they are shot in sparse interiors, but overall it sounds great. There’s also great use of found sound – for example, the sound the assembly line machine makes, the jets of air, the hydraulic noises, the plastic popping off of molds, all adds up to an aural experience that is the design equivalent of singing in church.