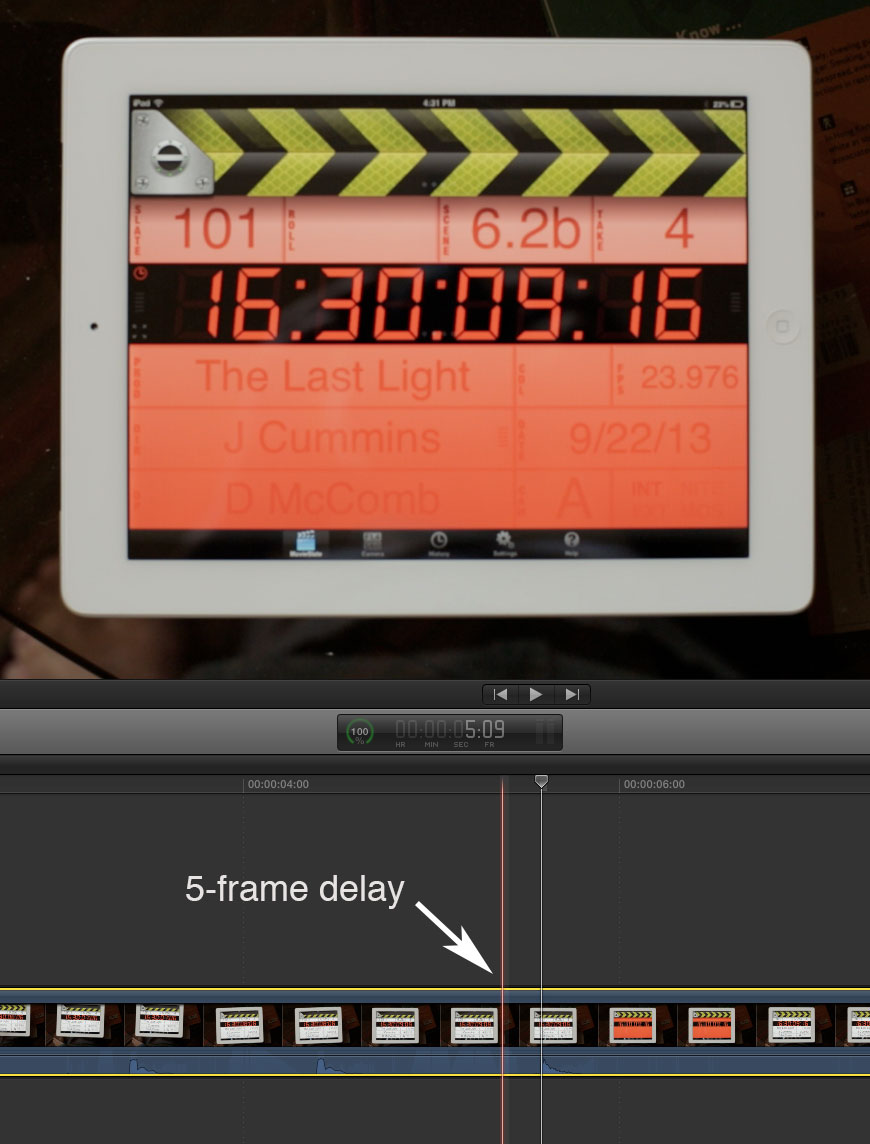 On most shoots, I rely on Pluraleyes to sync my audio automagically, precluding the need to slate anything. This works great when you can record a reference audio track. But ever since I began shooting with Magic Lantern raw, I’ve come face-to-face with the need to slate every single dialog take, because Magic Lantern raw has no reference track. So getting a perfect visual reference is key to avoiding nightmares in post.

Enter Movie Slate. The $49 iPad app is a great alternative to carrying around old fashioned sticks. You can enter all kinds of metadata and have it automatically increment with every take. But one thing I’ve had a hell of a time with is getting an accurate sync point.

So I did some testing today to figure out what’s going on. Here’s what I discovered: there is a 5-frame delay between when the sticks come together on the iPad and the slate begins to turn red, until the audible beep is emitted.

So that’s my tip for you today: just look for the first red frame, and nudge the audio clip spike 5 frames to the right. Link the audio and video clips, and you’re done.

What’s the point of a mattebox, anyway? I never bothered with one for years and did just fine, thank you very much. Today I posses four of them. How’d that happen? If I’m primarily a dslr video shooter – why would I need one?

If you’re asking these questions, it’s probably because you haven’t discovered the magic of strong backlighting. See the still below: 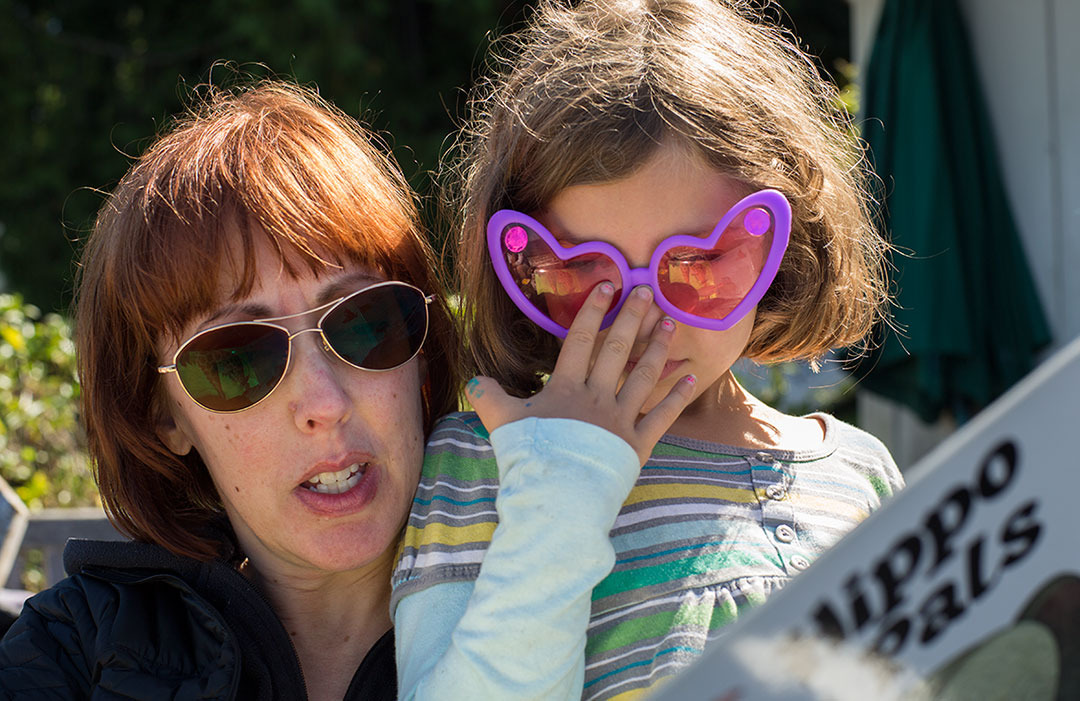 Shots like this are why filmmakers love their matte boxes. A mattebox’s primary purpose is to give you godlike backlighting powers. A mattebox with a French flag (also called a top flag or an eyebrow) prevents lens flares and keeps your image at its sharpest contrast. Whenever a light aimed toward the camera hits the lens relatively directly, it refracts and causes a low-contrast effect that can be either annoying as hell OR totally pleasing, if you’re going for an ethereal look. As in: 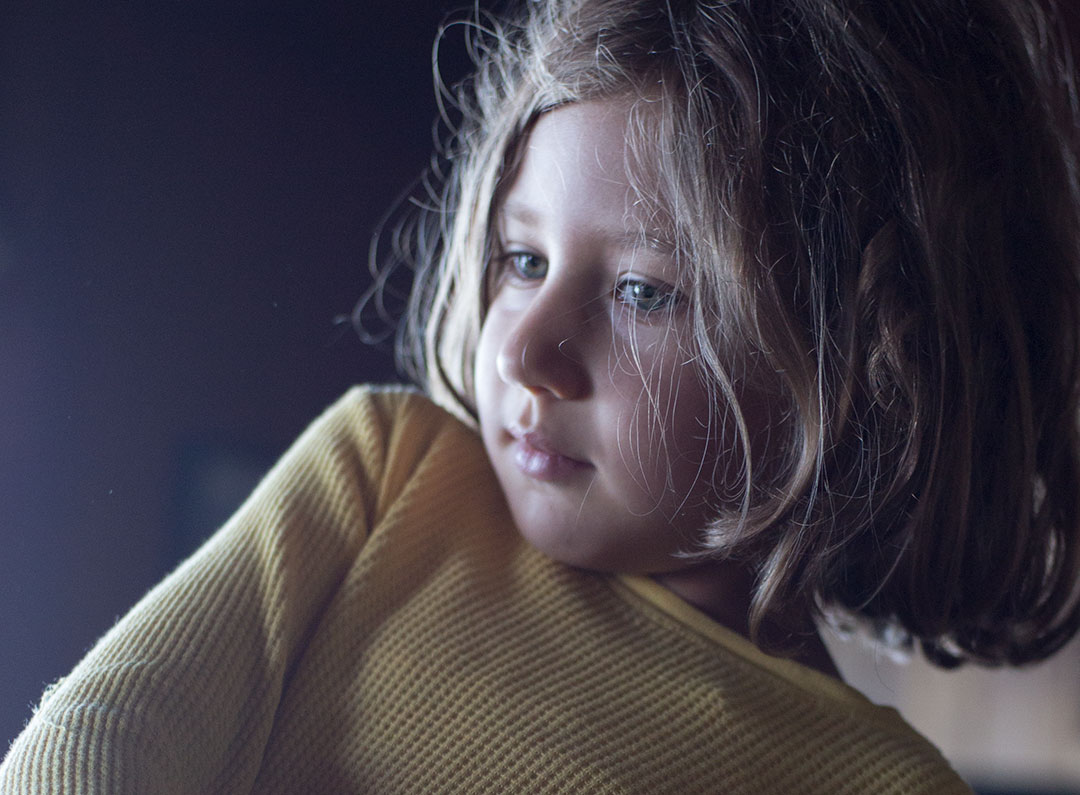 There’s another reason (far less interesting to most dslr filmmakers) to use a matte box: it allows use of 4×4 or 4×6 glass and resin filters. If you’re like me, though, you may have already invested in 77mm screw-in filters like Tiffen water white ND. These work fine. However, if you’re working in fast-changing conditions, where you can have a case of filters on hand, it’s tough to beat tray-based filters for speedy filter change ups.

OK, so those are the two (and really only) qualitative reasons I can see to use a matte box. Yeah, I know – it also makes your camera look bigger, and some people equate that with looking professional. But I prefer my cameras small and unobtrusive. Luckily, matteboxes are not required to be big and heavy. More on that in a moment. 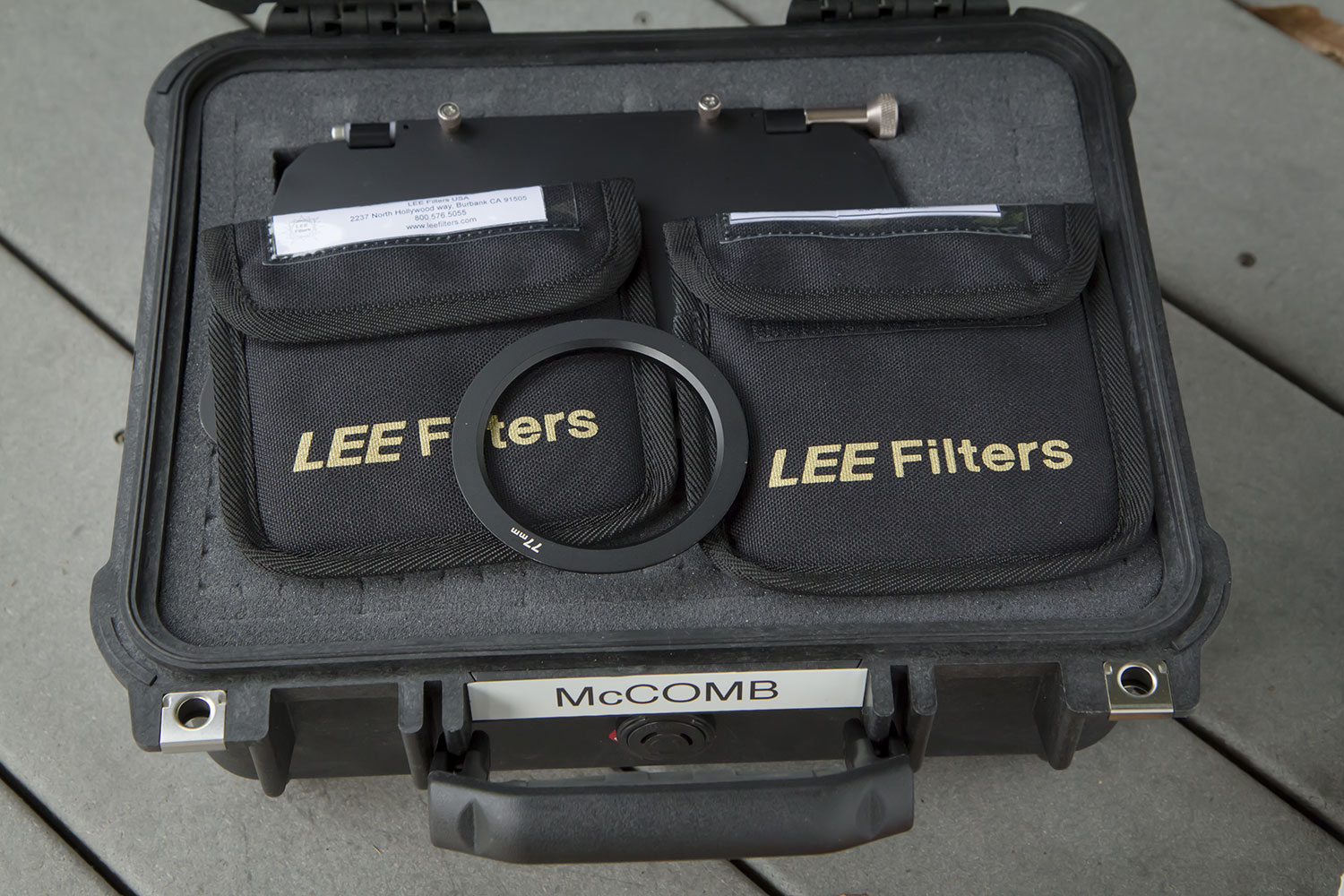 An aside: you see tray filters on narrative film sets more often than you do in documentary productions. But they CAN be extremely useful on docs. I have a small but growing set of Lee ND filters, which are made out of resin. The reason I love them is that they won’t break like glass can, so I can carry them in a big pocket and knock around with them, and always have an ND within reach when I need it quick.

Matteboxes are like lenses: they all have personalities. Let’s get acquainted with four of them:

I was fortunate enough acquire the Redrock Micro Mattebox earlier this year when I won the audience choice award for my short film The Coffinmaker in the American Photographic Artists Short Video Contest. And Adorama kindly sent me the Flaspoint box for this review. And I’m glad they did, because even though it’s by far the least expensive box of the bunch, in some ways outperforms the others.

Yep. Sometimes the least expensive stuff is the best for your purpose. But let’s see what each has to offer. 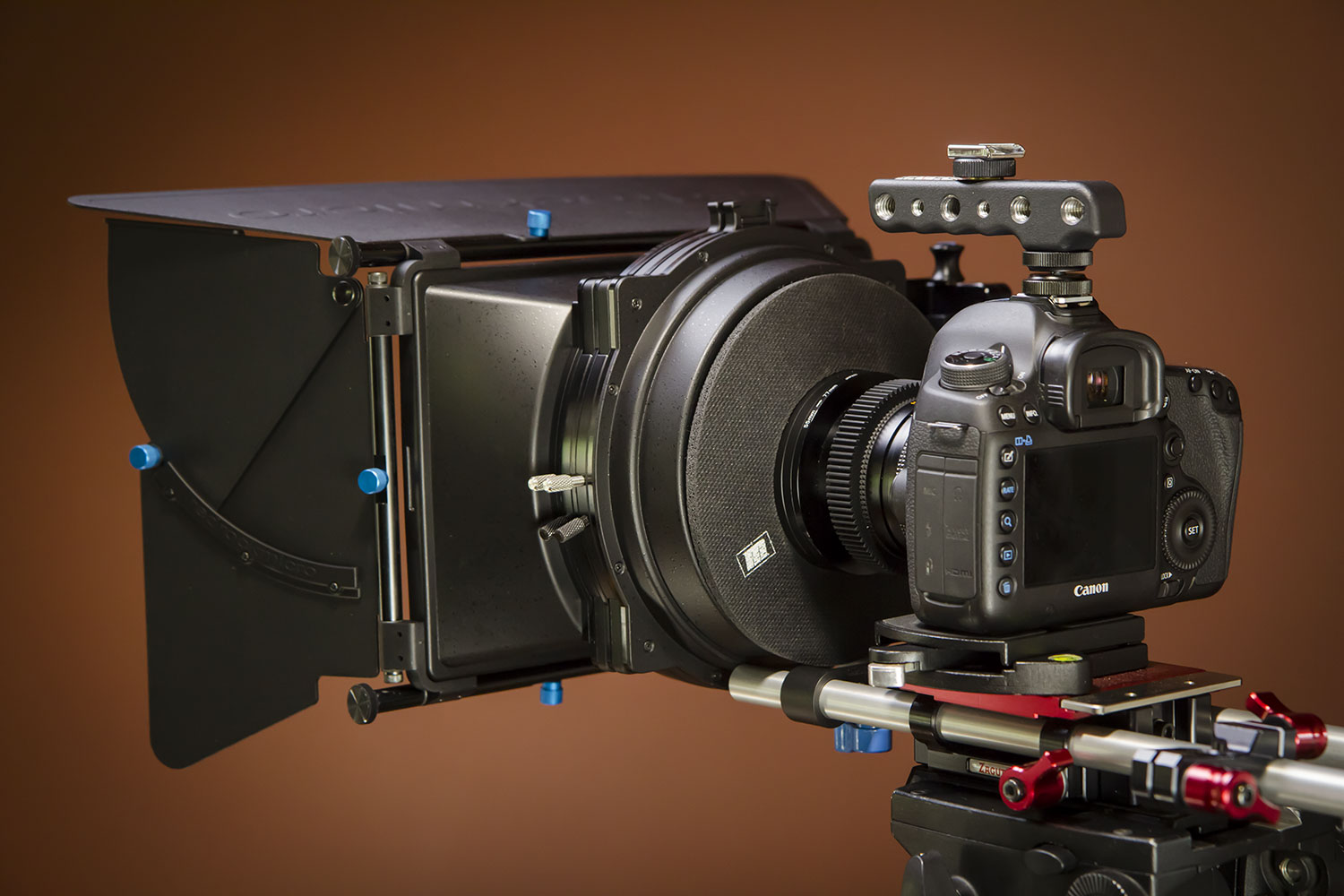 This box is a beast. A fine beast, if you’re working on a narrative film set and you want a mattebox that will swallow your lens. Of all the boxes in this review, this one gives you maximum protection from backlight. 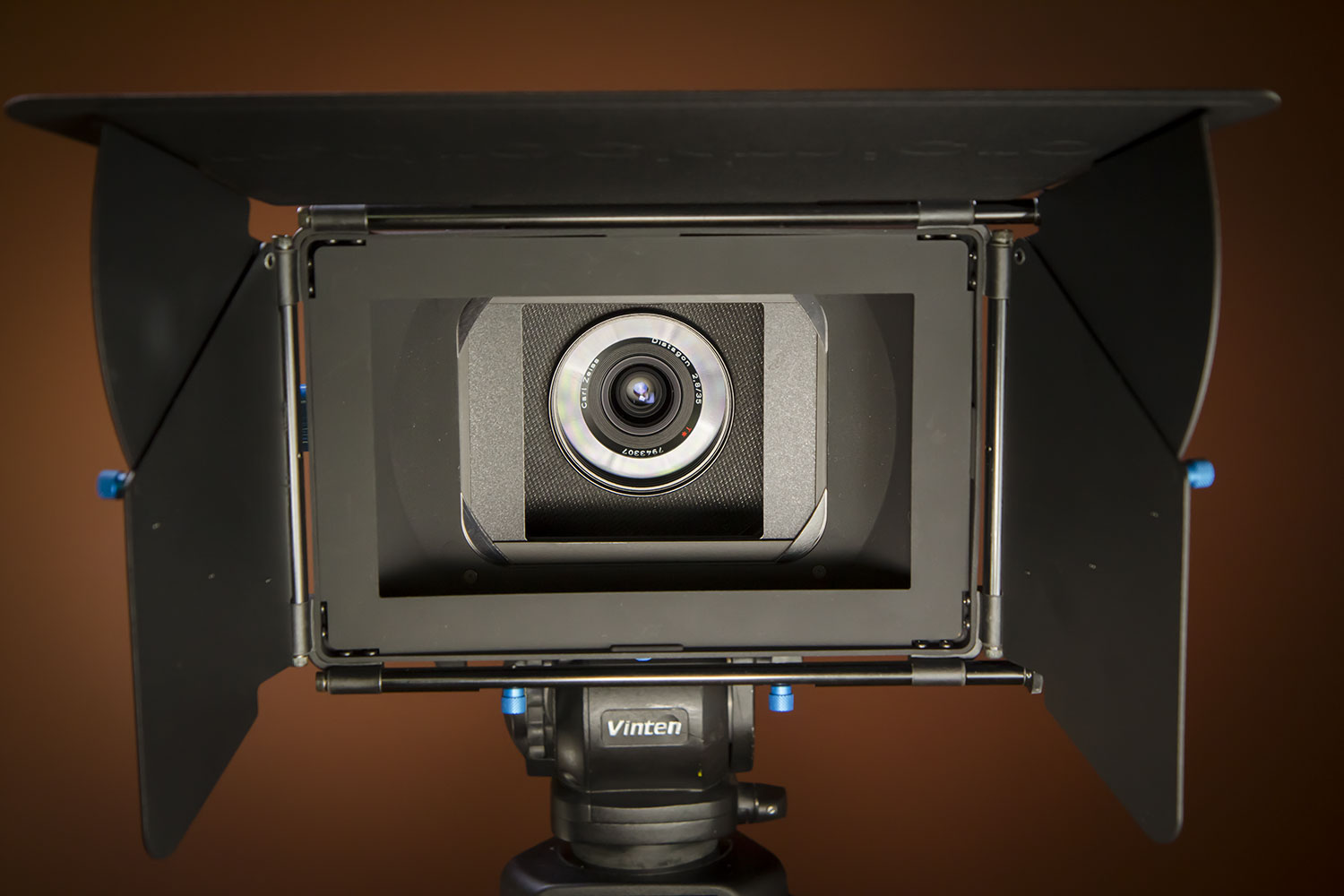 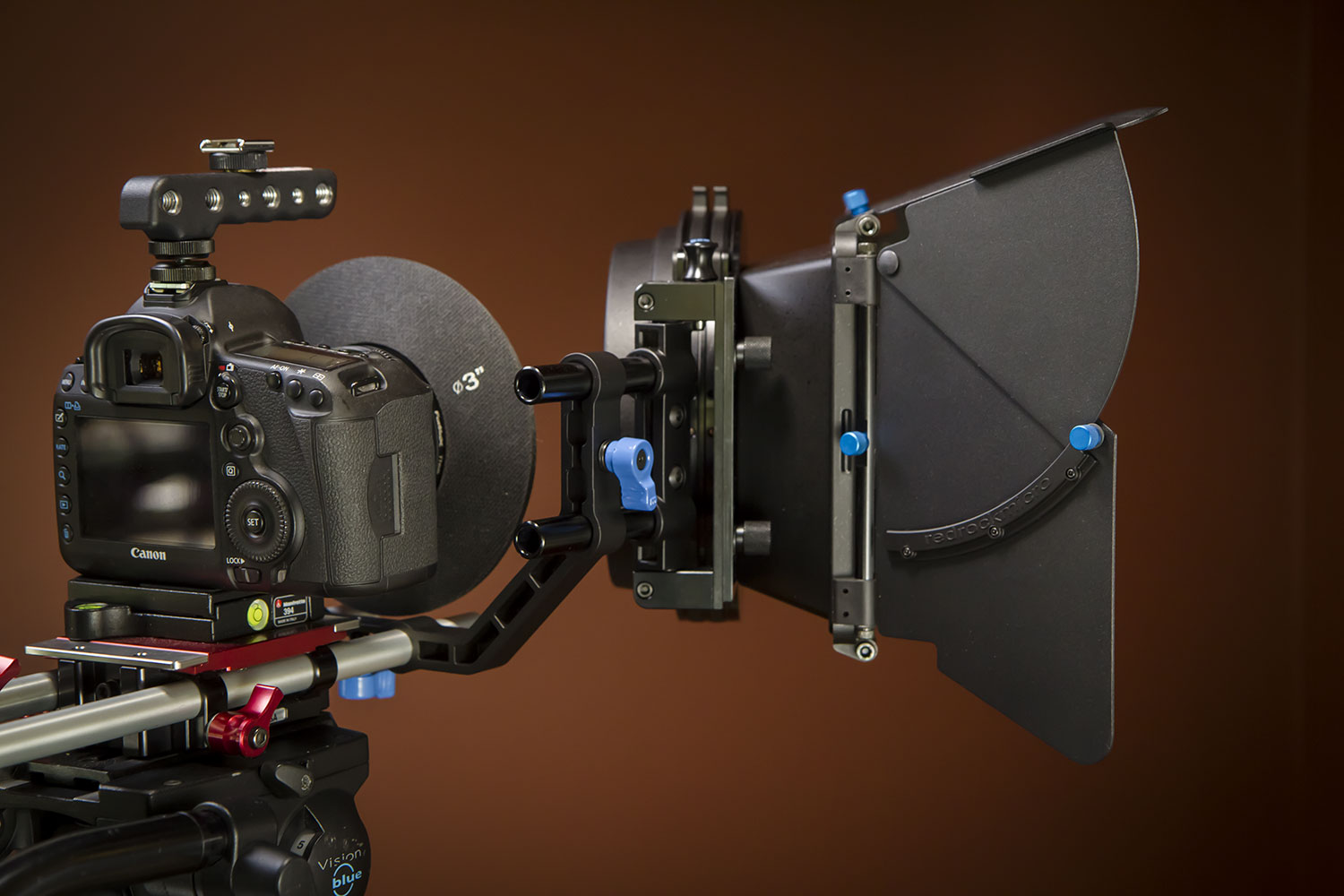 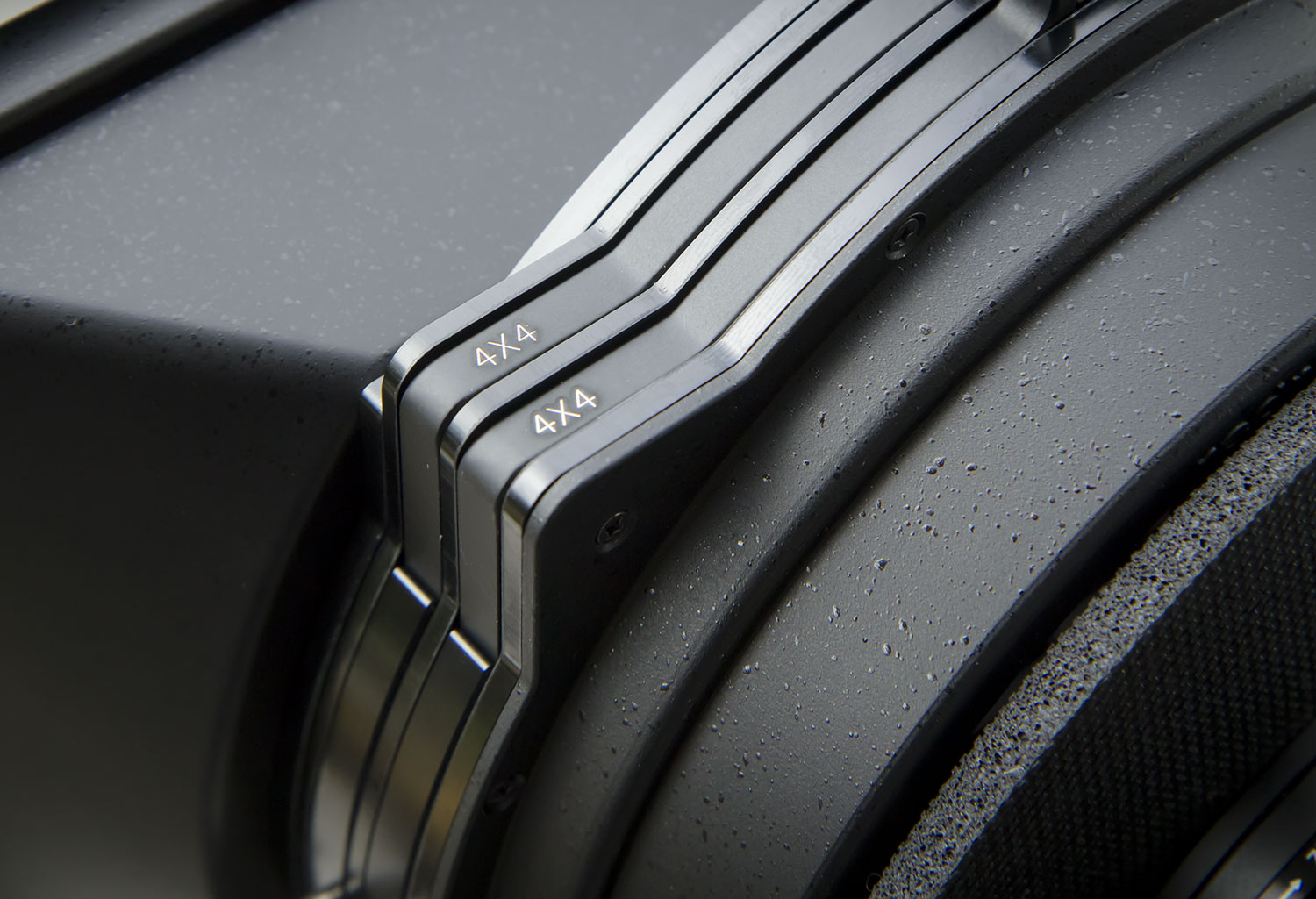 It also gives you the option of using 4×5.6 filters, as well as 4×4. But the 4×4 label printed on the box is a little misleading. This box is really designed for use with 4×5.6 filters. To use 4×4 filters with the supplied trays, you have to insert a flimsy plastic mask, which is a serious pain, and feels like an afterthought by the designer. 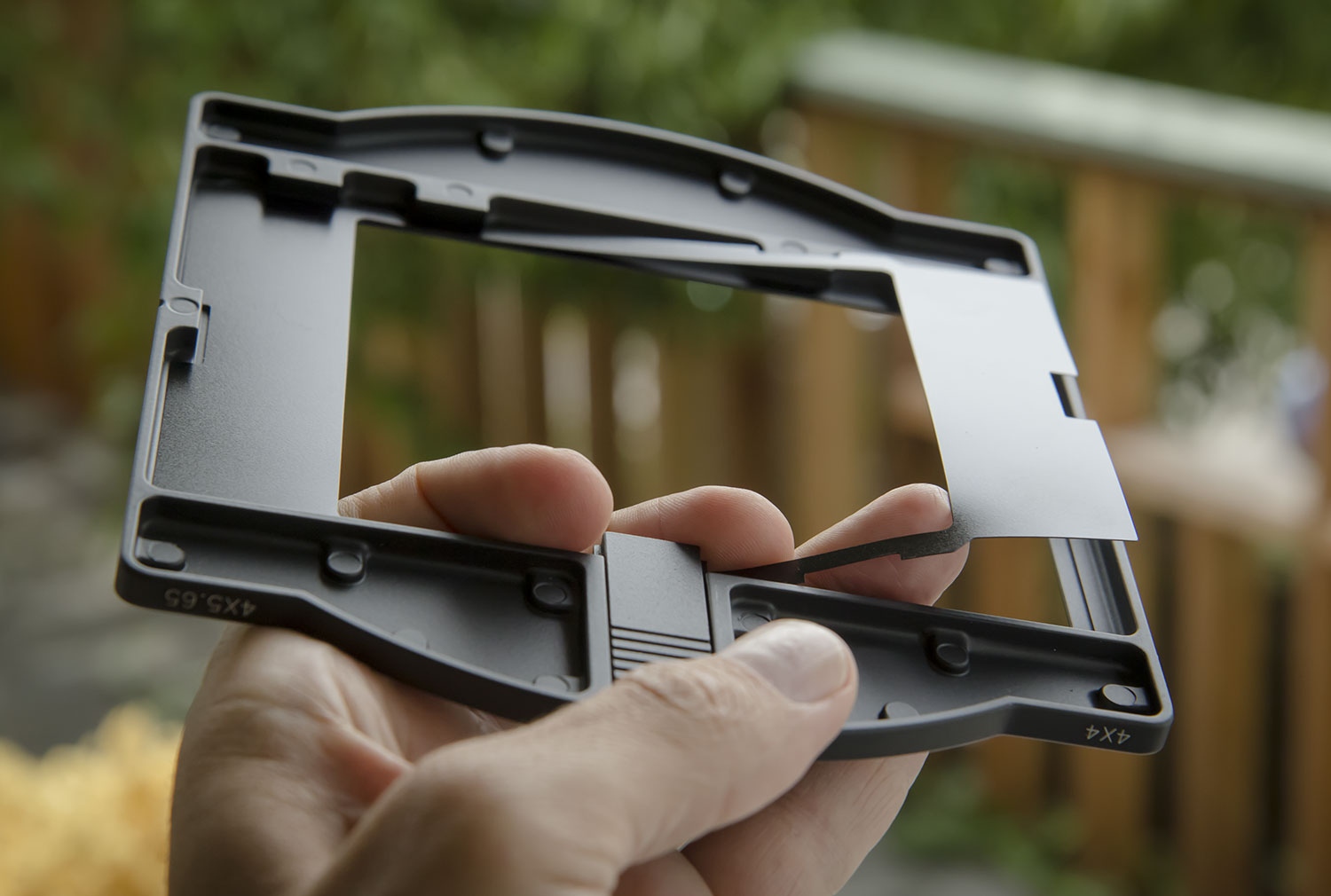 The mask gets jammed and makes filter changes a chore. 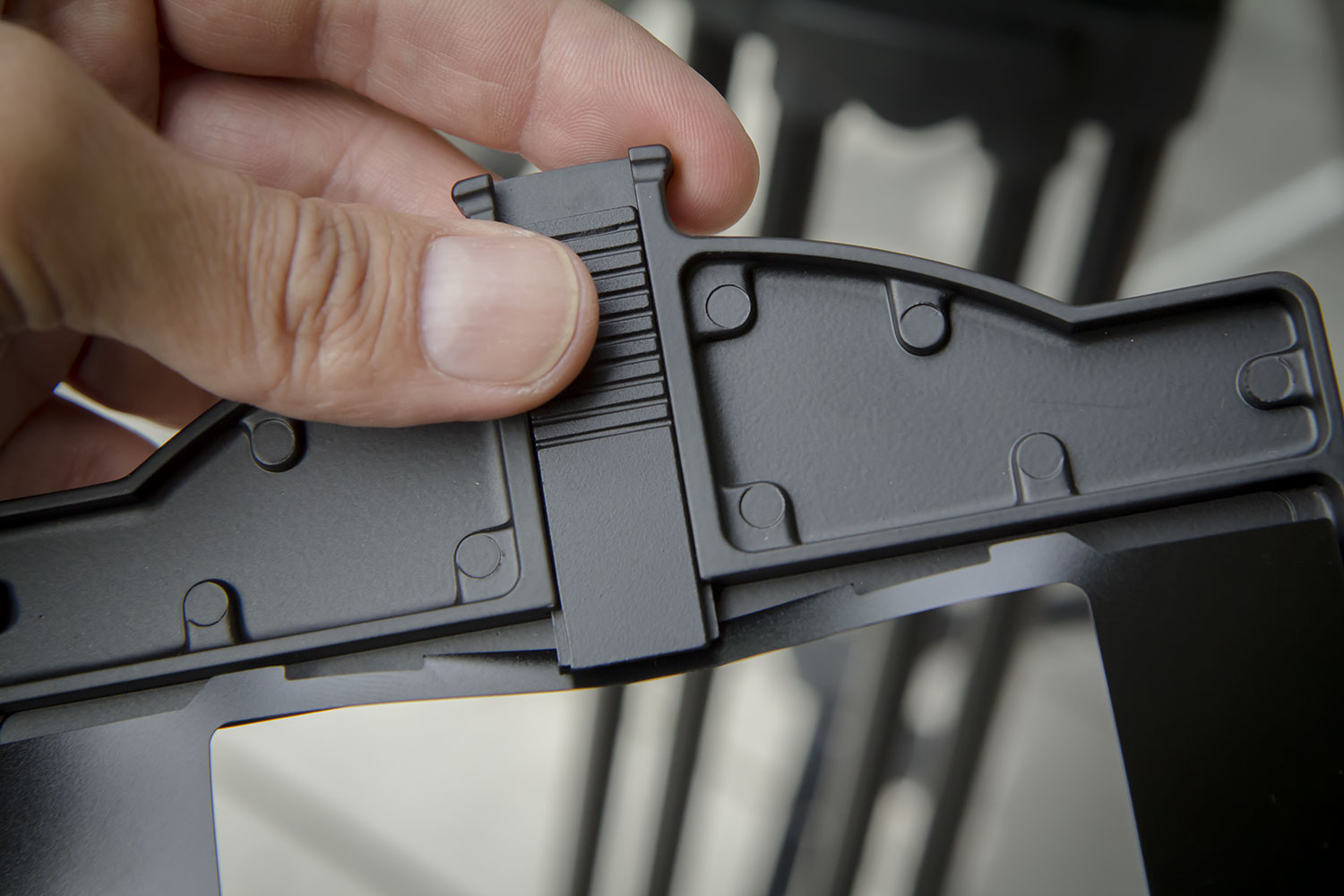 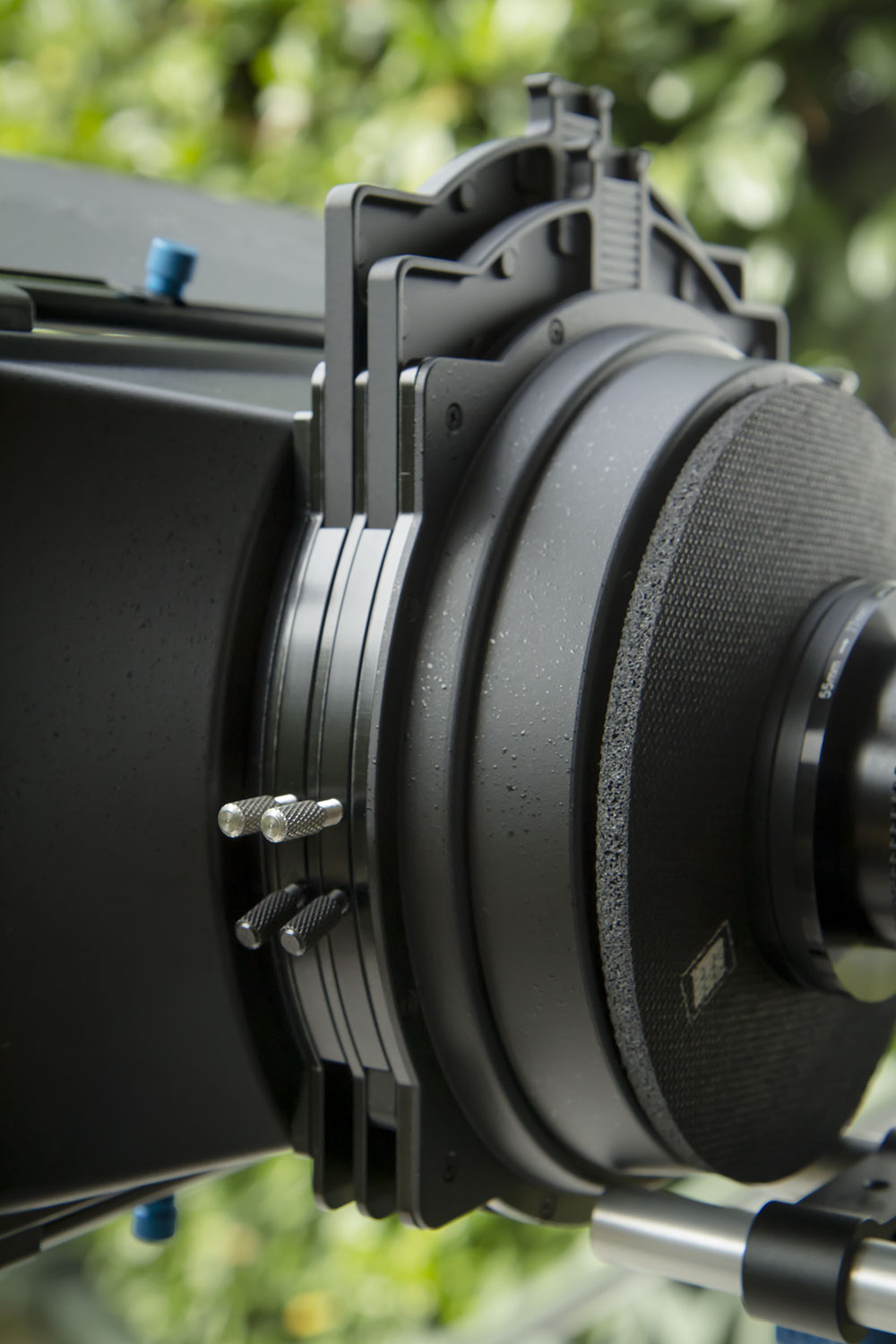 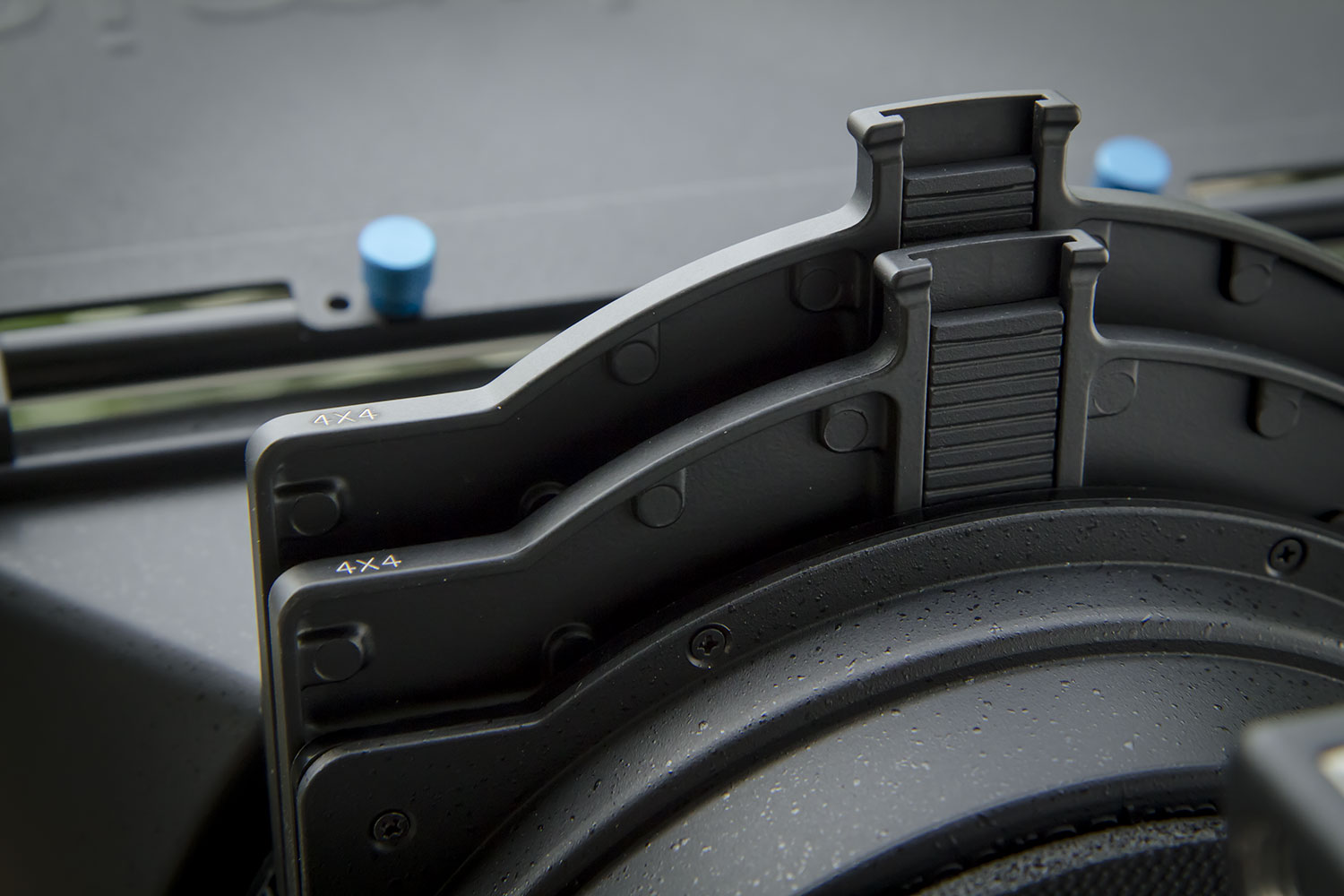 The two filter stages of the Redrock Micro Mattebox are a dream to work with. They drop into place firmly, with great tactile feedback, and and rotate smoothly and securely. 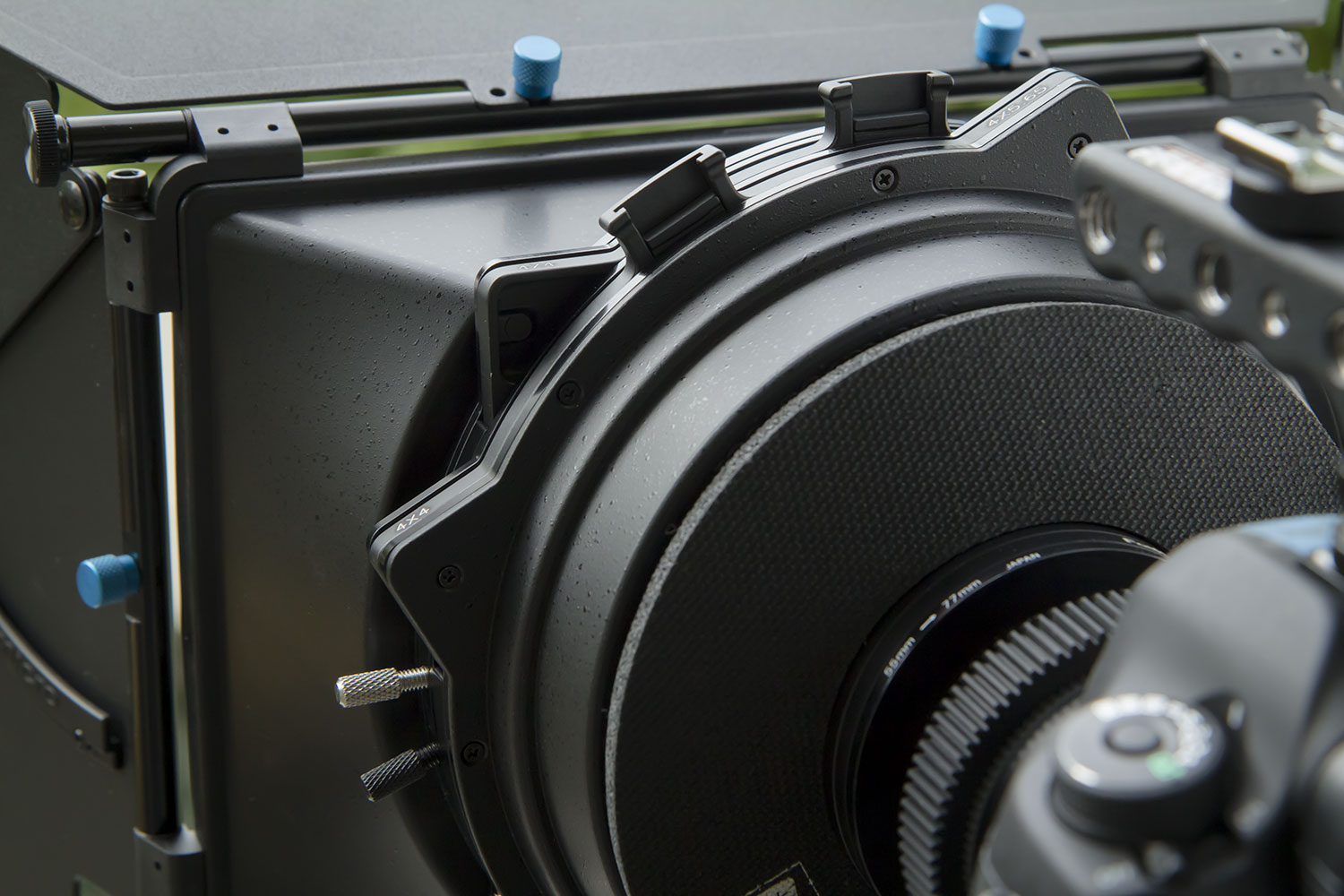 The whole back of the unit rotates, which is incredibly cool. So if you have a need to use 4×5.6 filters, this box is a big winner.

Drawback: having nearly 4 pounds on the end of your rods is a LOT. Too much, in my view. Even though I like how deep this box is, I find I rarely can think of a reason to NOT use one of the lighter, simpler boxes that I’ll talk about next. I don’t like having all that weight to counter balance. Matteboxes don’t have to be that heavy. It’s also much, much bulkier than any of the others, and that means it limits where you can put the camera. If you’re on a proper film set, that’s probably not an issue. But if you’re working on location, rocking a doc, that can be a problem. 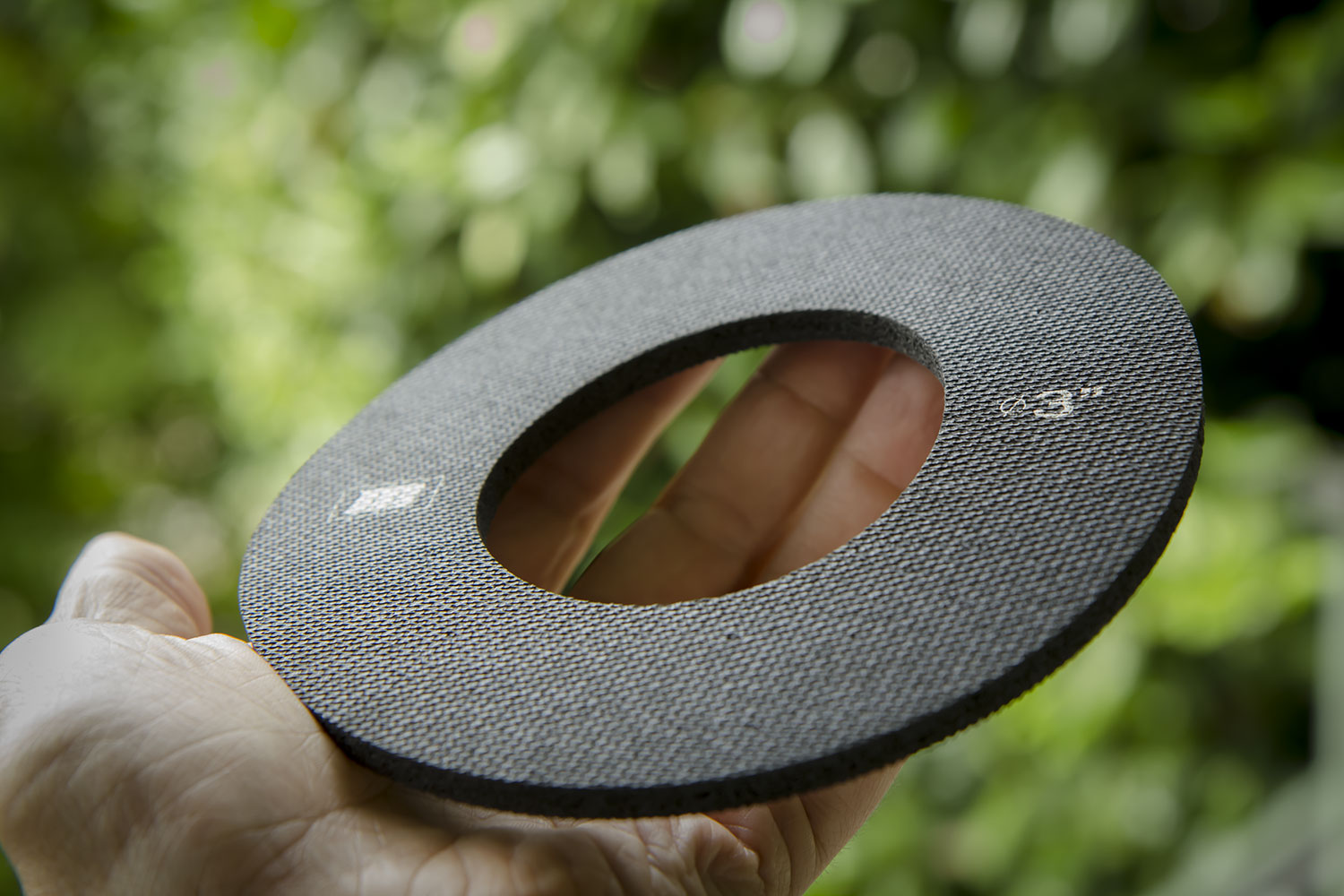 Also, for its heft and price, I don’t like the foam donuts on this box. They work well, though. Yet they seem like another design afterthought. I would expect something more elegant from Redrock Micro, like the nun’s knickers that come with the Tilta. Which we’ll see next. 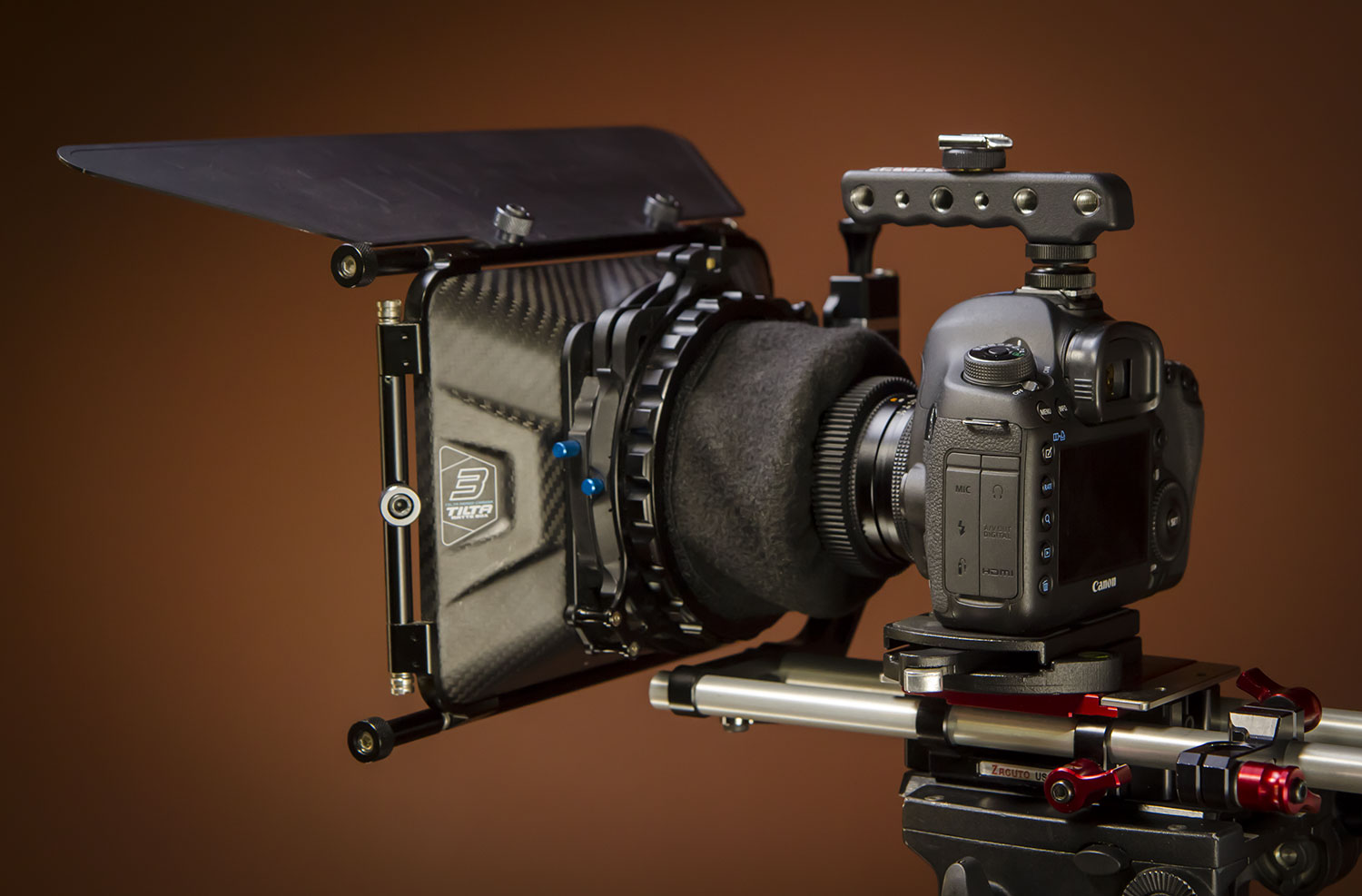 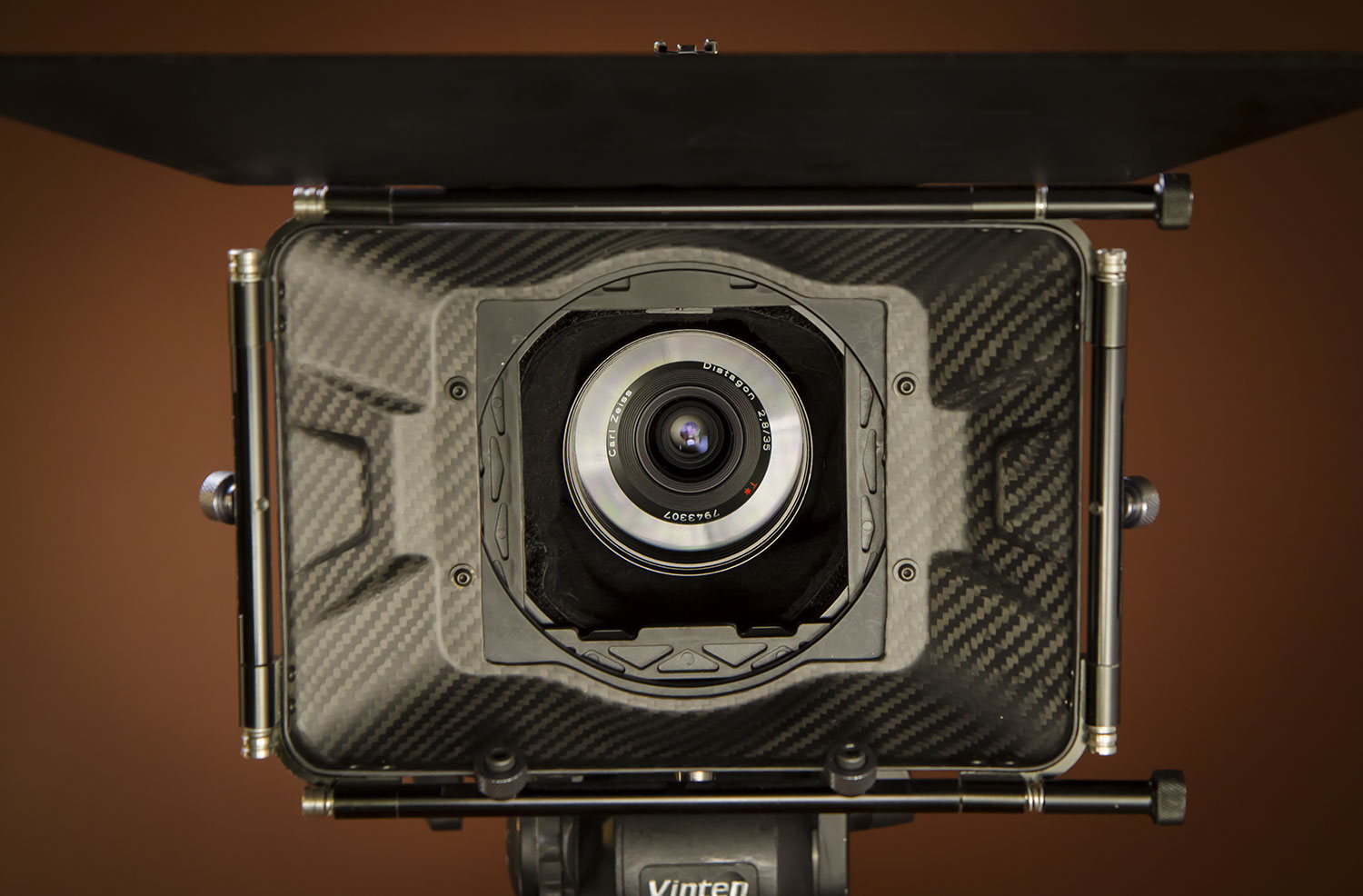 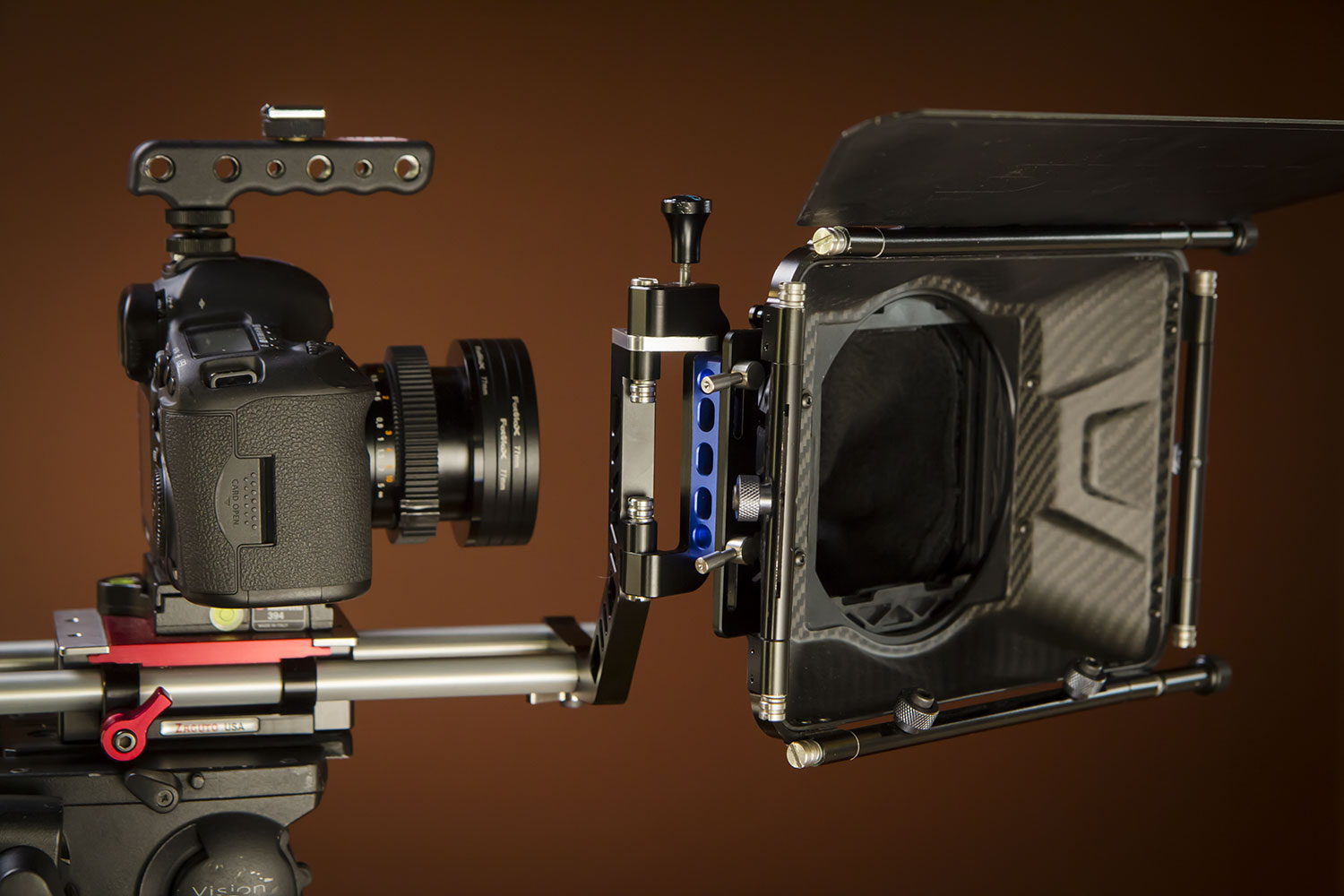 This is the first mattebox I ever purchased with my own money. The primary reason I bought this one was because it’s HALF the weight of the Redrock (which I’d previously rented). Like the Redrock, it’s got a swing-away arm that is extremely sold, made from milled aluminum. Tilta stuff is bomb proof. You could use this box on a set every day for a year and it would still be going strong. Except for one thing… 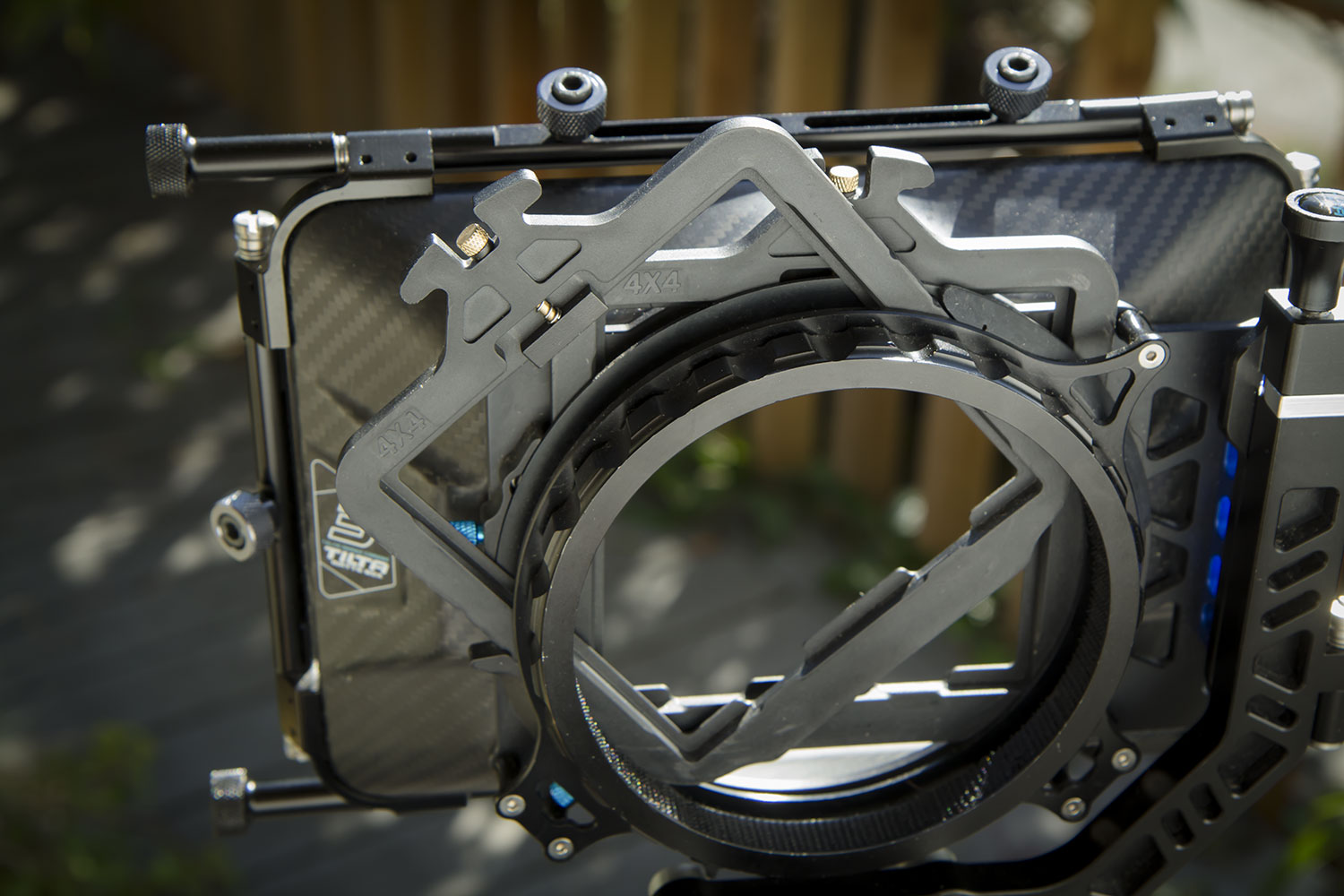 The filter trays are NOT great. Just flimsy plastic, which doesn’t match the rest of the box at all. They don’t slot into place convincingly (you have to hunt for where they are supposed to stop – there’s no audible or physical “click” into place when it’s seated). The rotating stage is also STICKY. I would avoid this box if you plan to use it primarily for filters. Otherwise, it’s light weight, solid build and great looks are winners. This is the second-most frequent box that I reach for.

My last gripe about the Tilta is that the mechanism to adjust box height is awkwardly designed, making it difficult to adjust without using a tool to pry the small arms loose. It sure is a beautiful blue, though. But this is a case of form beating function. 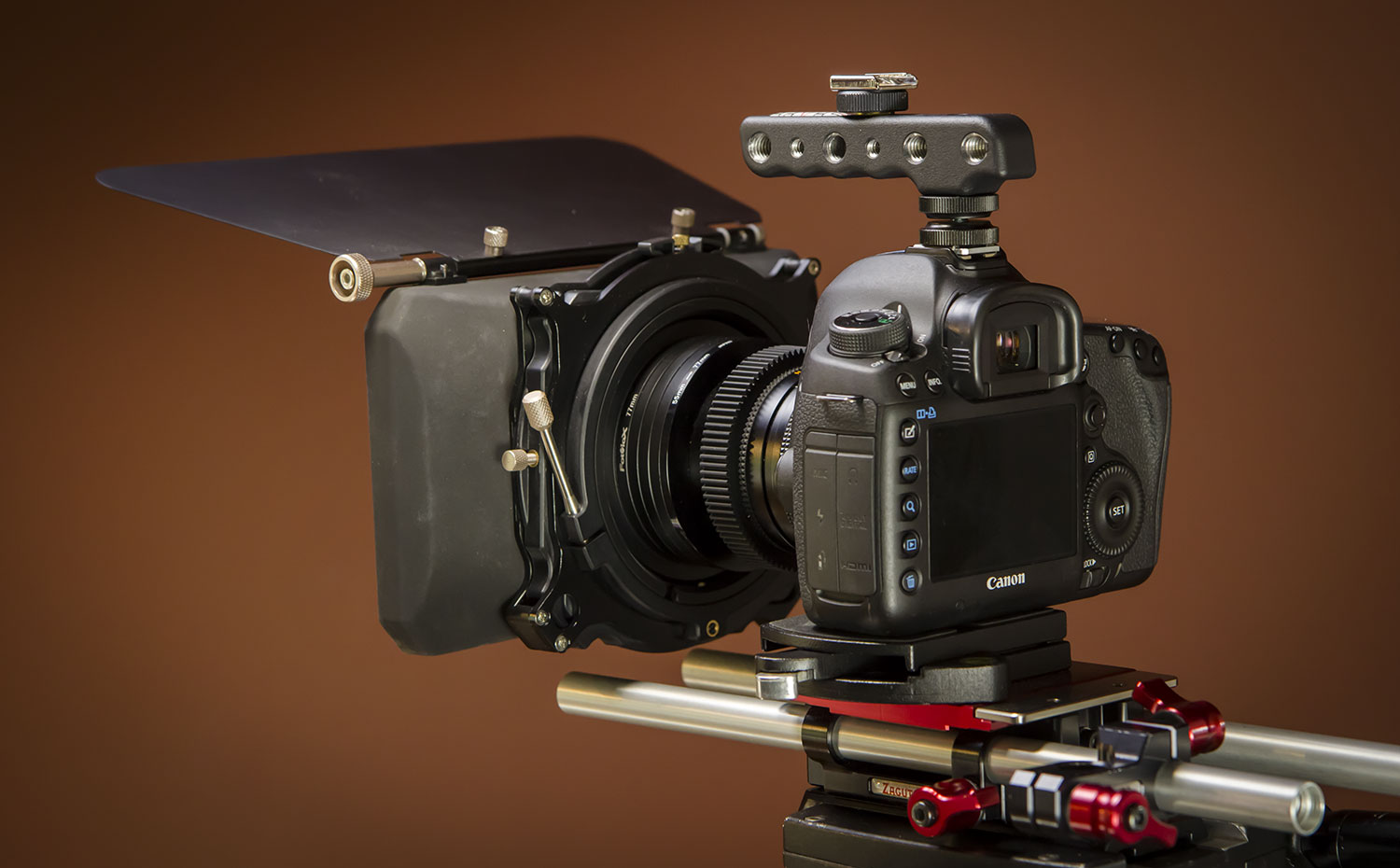 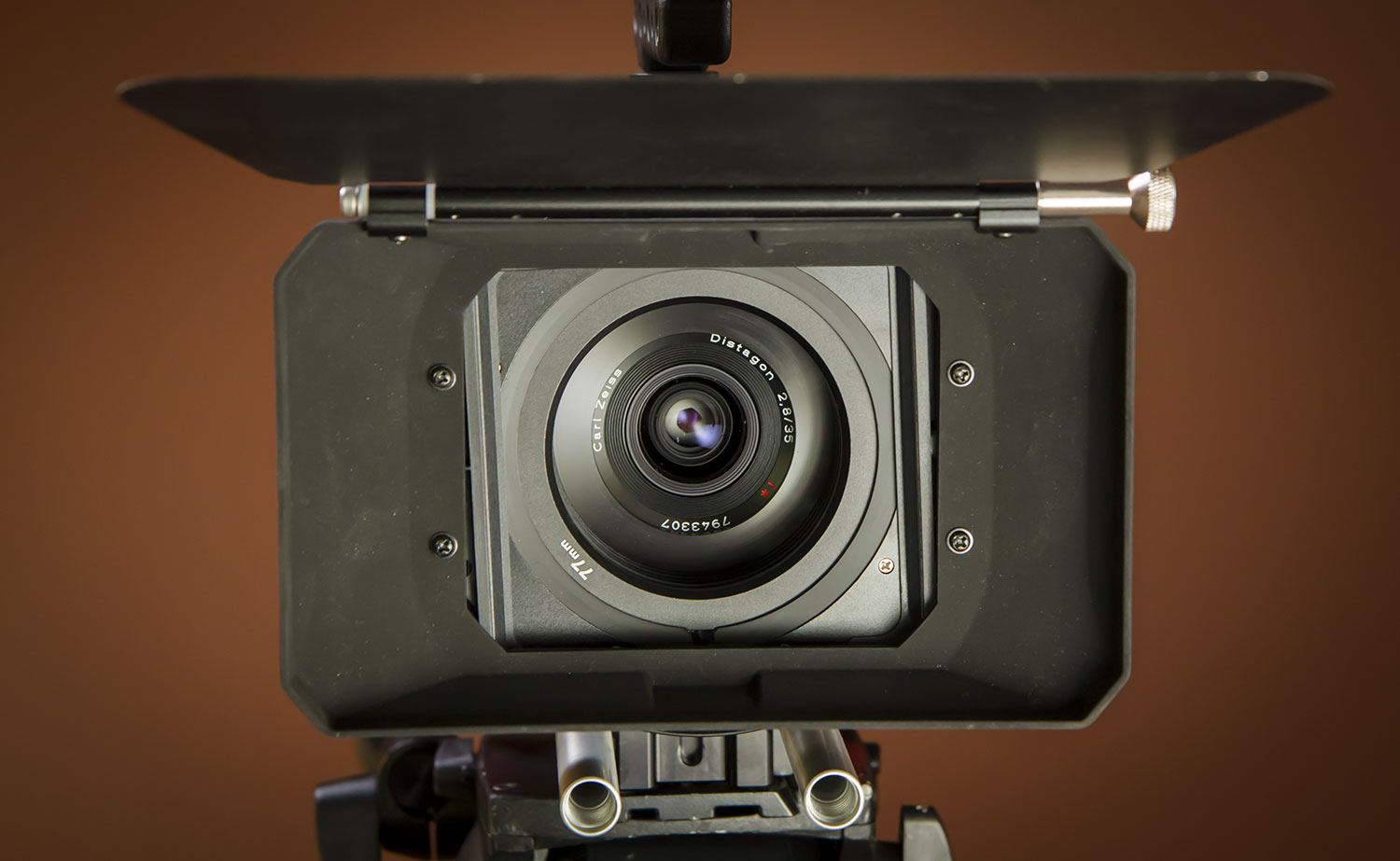 I bought this mattebox because I needed an extremely lightweight box that did one thing: keeps backlight off my lens, mostly in outdoor shooting scenarios. I wanted a box that I could attach to a zoom lens and work with it all day without thinking about it. This one fills that bill perfectly.

No rods are required to use the Genus Lite, which makes it very flexible for run-and-gun shooting. I use it for shooting stills, too.

Best use: I’ve used this box to keep light off my lens in situations that otherwise would be impossible, like the establishing shot on the couch in Mr. Famous, which was made with an Aviator travel jib. The light jib simply isn’t capable of handling the weight of any of the other boxes compared here, which all require rods.

The way this box attaches to your lens is unusual: it requires a screw-on ring that allows the box to clamp on. This is a great if you’re going really light – ie, without rods. But I discovered one potential problem with this design while using this box on my 50mm Zeiss f1.7 prime. As I was shooting, I suddenly noticed that I couldn’t focus to infinity. WTF?

A few more attempts and I realized my lens had slipped it’s calibration and was out of tune. I took it to Ballard Cameratechs and they were able to retime it for about $60. It took two tries for them to get it right. They told me that most lenses would probably be OK, but that some don’t hold up well to having even small amounts of weight on them when the barrel is rotated. Result: I won’t use this box on any of my Zeiss primes. I have, however, used the Genus Lite with a rented Canon 24-70 f/4 zoom for three days with no problems whatsoever.

The Genus has just one tray, and it rotates! (a pleasant surprise on such a tiny mattebox). So you can use it with a polarizer such as this Lee resin pola. 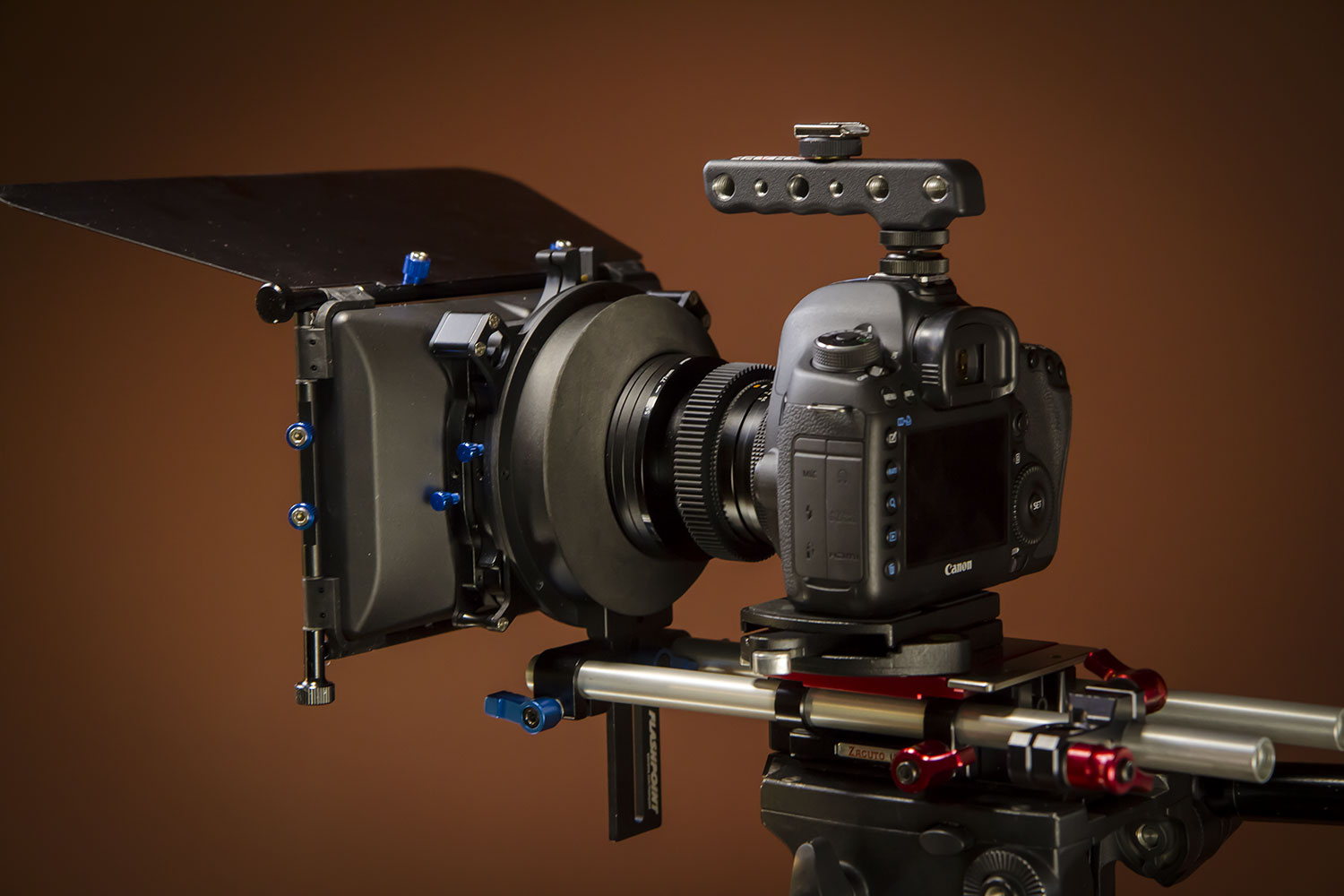 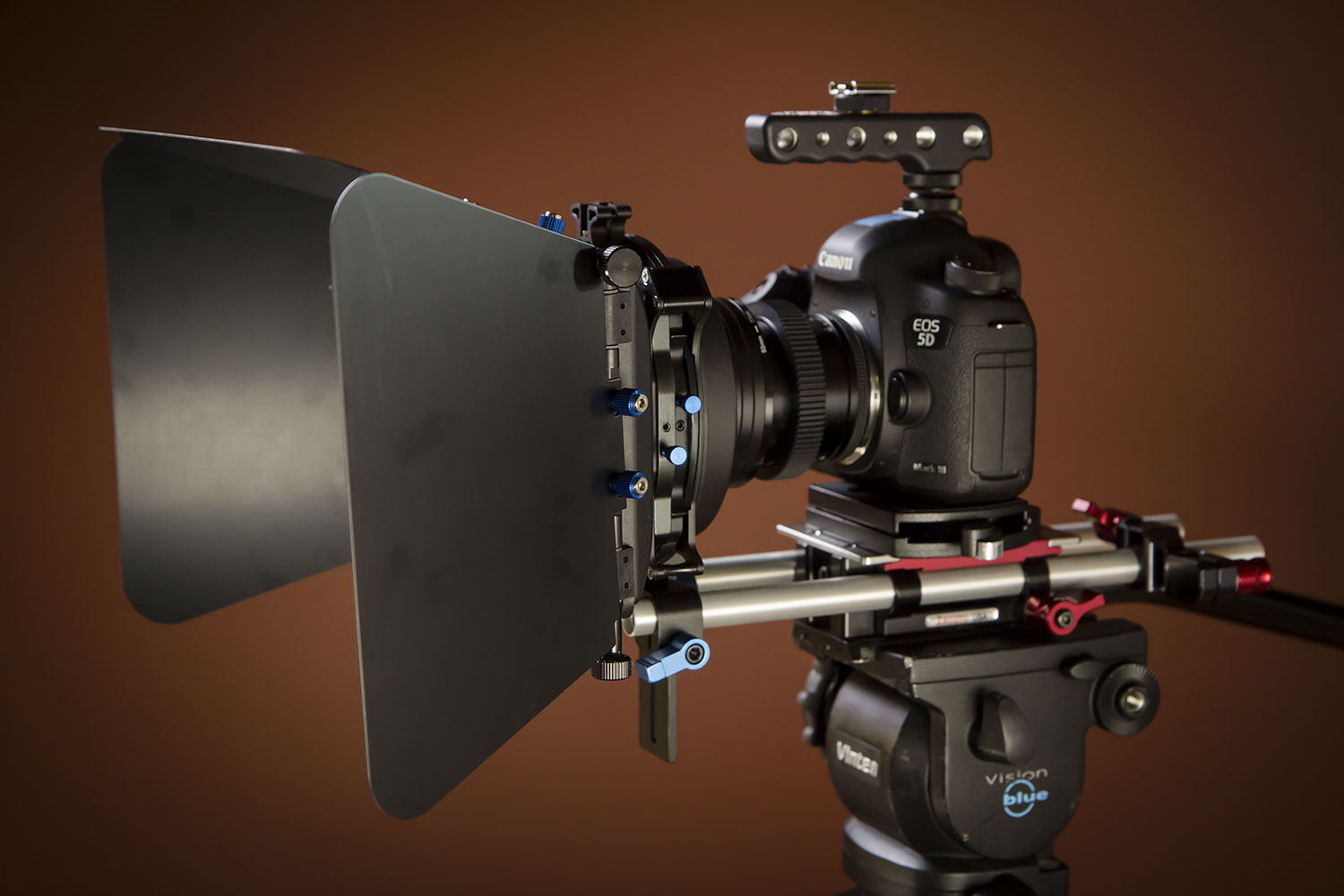 For me, this box is the most flexible of the lot. It is extremely lightweight. It has side flags, if you need them (rarely). And it attaches via rods and a clever slider that gives lots of height options. It’s really quick to slide up and down, too.

The primary tradeoff with this box is that it’s not as deep as the Tilta or Redrock. And it’s not as well made. But for me, it’s compact size, light weight, and flexibility means that it’s the box that goes on my camera if I’m running out to grab a shot that might be backlit. 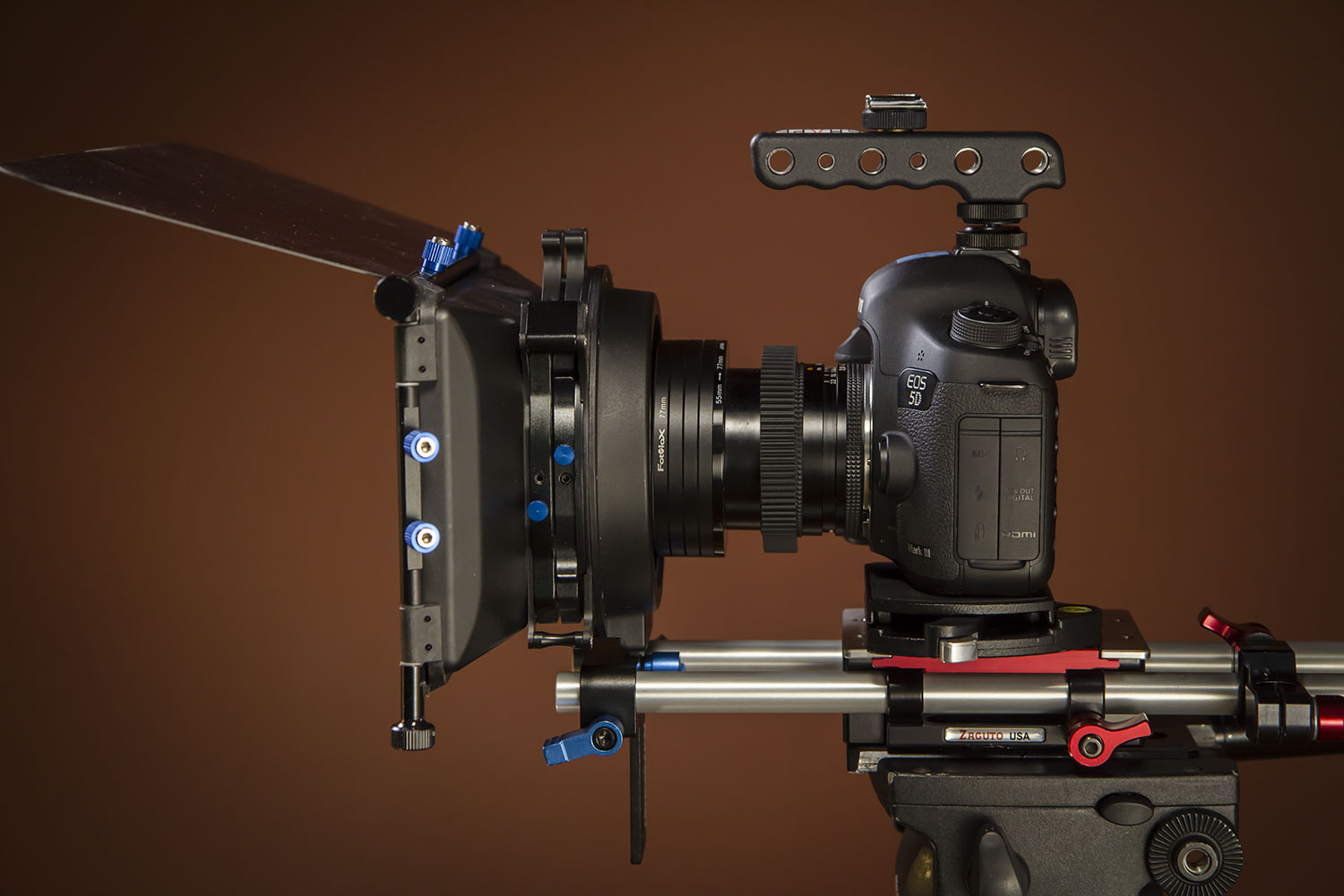 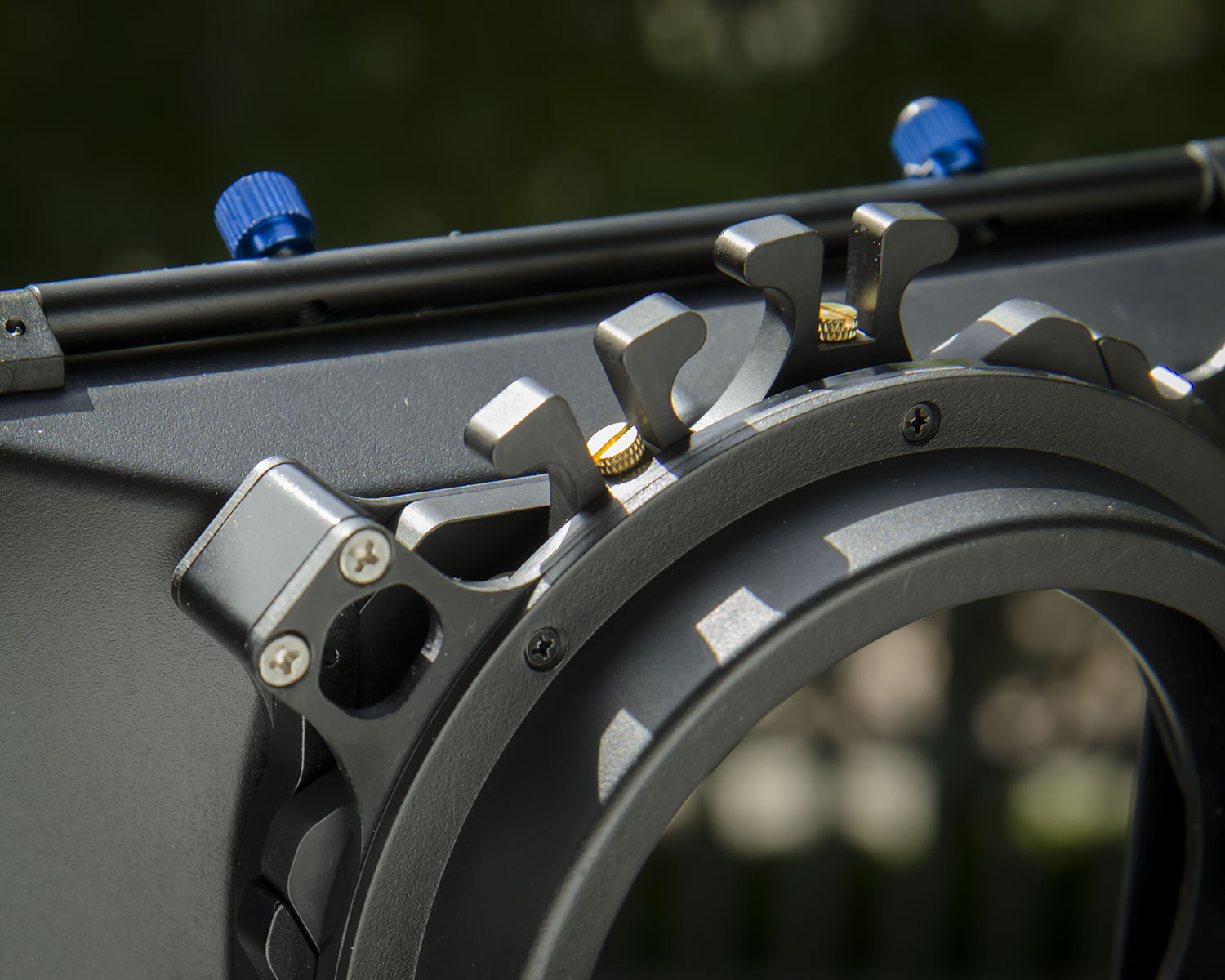 This box somehow squeezes in two stages, and one of them is rotating.

They seat into place and rotate smoother than the much more expensive Tilta mattebox! 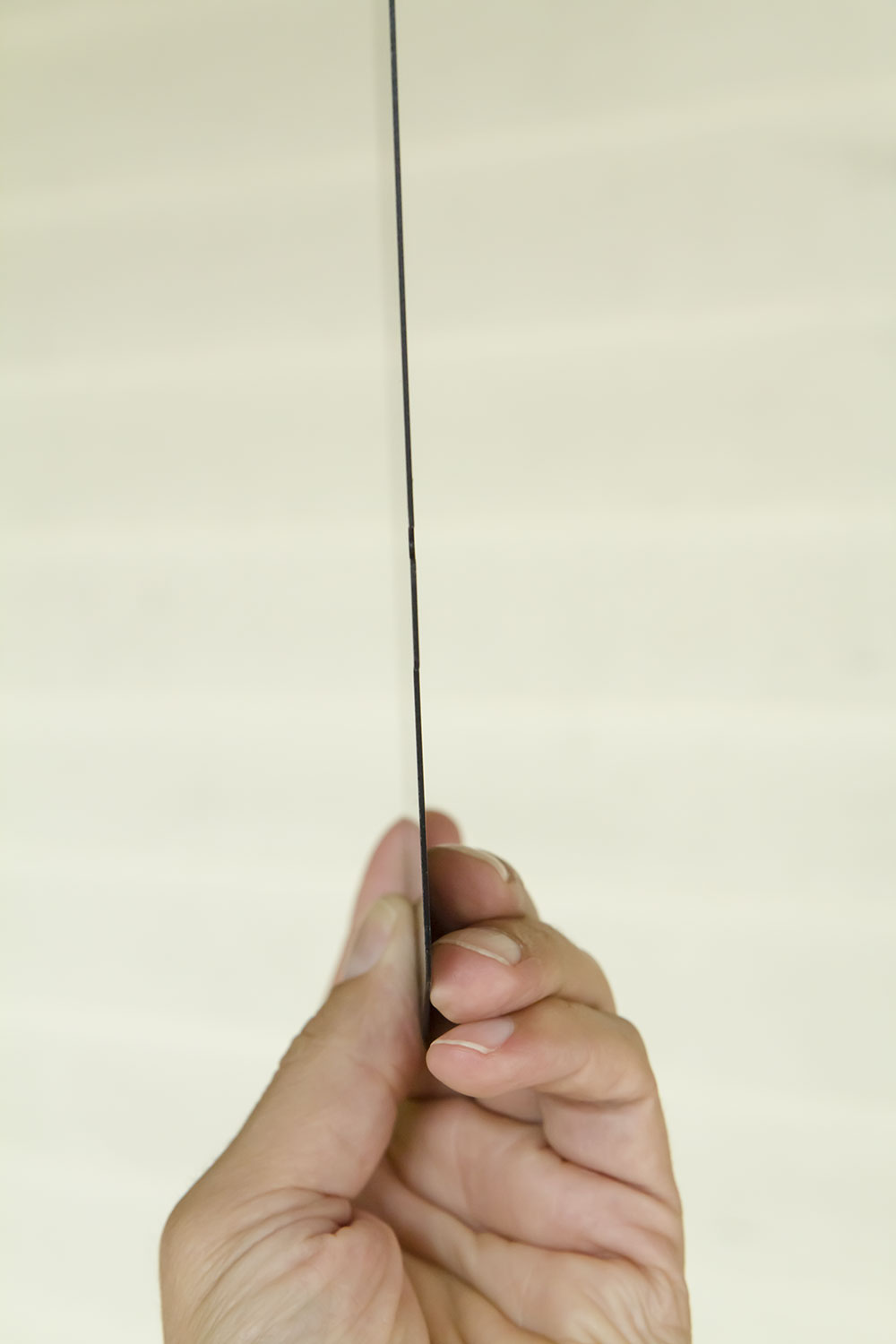 The aluminum flags are very thin, but I find this to be an advantage here. All the flag has to do is block light – so in my view, the thinner the better, because it makes them lighter. And the aluminum is plenty strong. One thing I have noticed is that these flags really show fingerprints! 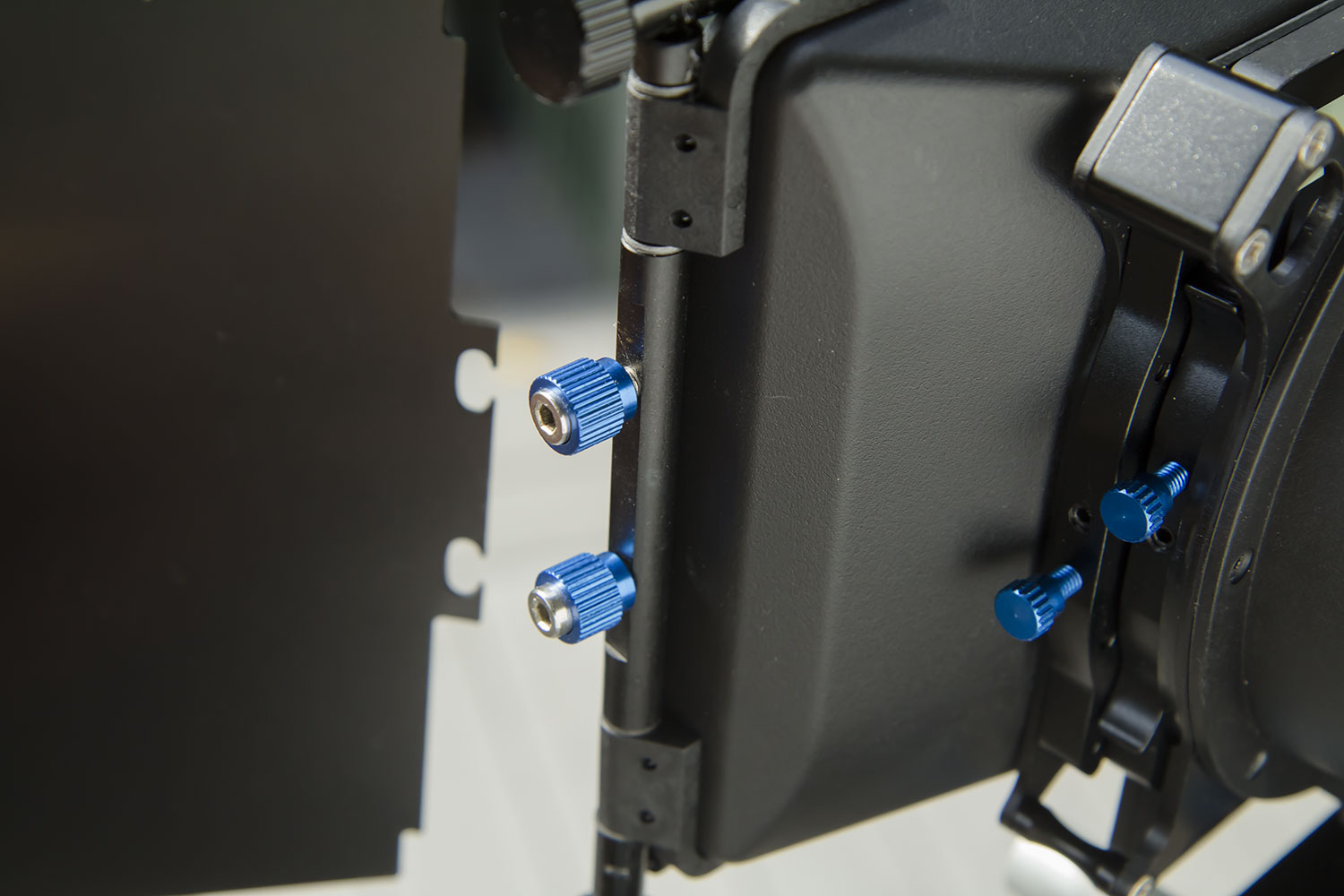 The side flags have a clever method of attaching securely.

Drawback: It’s made of lightweight plastic and thin aluminum, so you have to be careful with it. But describe for me what camera gear you own that you are NOT careful with? So I don’t find the build quality to be a deal breaker. For the price, I am inclined to use the heck out of it until it breaks, then get a new one and call it the price of admission.