I’m still in the early stages of developing my style as a filmmaker, and one technique that I’m already noticing is becoming part of my style is to record audio and video separately in two takes. That is, have a sit-down with the interview subject in which there are no cameras present – just audio recording. This puts people at ease, because they can focus on what they are saying, not HOW they are saying it, or how they LOOK while saying it. I find it makes for more authenticity, and it’s nice to be able to focus on JUST getting great audio in this pass.

Then I schedule a second session with the subject, in which it’s all about the video. I DO record reference audio with a camera-mounted shotgun mic during this second session, but find I rarely use this audio.

Breaking these steps into two also allows me to do everything: I can run sound the first day with a boom pole, and work the camera the second day. Of course not all shoots allow for the luxury of two days of shooting, and I do work with a great sound guy who is a student at Art Institute of Seattle when needed. But at this point in my career, part of the joy of filmmaking is doing it all. I missed film school, so it’s the only way to learn.

Ok so back to the reason I made this post: Using this approach creates a big long audio file, usually about an hour long, with a lengthy interview, which I then carve up into the much briefer segments needed for the edit. Initially, I would drop the file into Final Cut, and slice and dice until it was about right, before sending it to Sound Track Pro for sweetening and repair.

The problem I run into, though, is that since I’m essentially working on the same big long clip, just sliced into different segments, FCP gets unhappy when I try to send individual clips over to Sound Track for repair.

The solution: Drop the whole audio file into FCP, then immediately, before you do anything, send it to Soundtrack (ctrl-click the audio file, then select “send to > soundtrack pro audio file project”). Then apply a Limiter filter to limit the dynamic range of the entire interview, which means the quiet bits will have more volume and the loud bits won’t be too loud. For the details of how to do this, follow this step-by-step tutorial from Larry Jordan on using the Soundtrack Pro Limiter Filter.

Starting with my audio more or less correct at the beginning of the editing process has helped me immensely to get the rest of the mix right, ie, music at approximately the right level, etc.

Master DSLR filmmaker Vincent Laforet will be in Seattle to teach a 3-day introduction to DSLR cinema that starts on April 30. If you’d like to participate live, there’s room for only 5 participants at $600 each, quite a value in itself. But what’s really cool about this workshop is that the entire thing will be streamed live, FREE. As tempting as live attendance is, I’m going to save the $600 and put it towards some of the amazing gear that Vincent will be demonstrating during the workshop, and listen in online.

I had a potential disaster today: after returning from two big commercial shoots, which I shot with my T2i in 720p 60p, I popped in the 32 gb SD card with most of the morning’s work on it, and immediately came to the horrible realization that of more than 100 files on the card, only 6 were readable. The rest of the quicktime files were visible, but showed only 33 KB on disk for each of them. Obviously, something had gone horribly wrong.

I spent the next 7 hours researching all of the data recovery options available, initially without finding a solution (at one point I was so sure the data was gone for good that I contacted my client and told them I had to schedule a reshoot, never a fun conversation). But I kept trying the many tools available and finally found one that got my files back. So if you’re facing the same situation, read this first and hopefully you’ll be good to go a lot faster than I was.

Two stills that I snapped during the shoot, which also showed up as 33KB files, I was able to open. However, only the first couple of lines of image data displayed – the rest was gray. Like this (see image to right).

Background: During my shoot this morning, my camera was overheating constantly – the little red temperature light was blinking like mad. But I’ve seen that before, enough not to worry about it – if it gets too hot, the camera just shuts down, cools off, and then you’re good to go in a few minutes. I had a perfect storm today: in addition to the overheating, the card got full and the battery died all at about the same time. All I remember is an error message displaying on the screen which said something to the effect of “Unable to save files to disk” and then it went black. I didn’t worry too much about it, because I’ve never had a problem before when the power dies on my T2i. But after today, I can tell you that I will very much worry about it. As best I can tell after researching this, it appears that the culprit for the lost data in my case was running out of power while shooting. Don’t let it happen to you. But if it does, all is not lost. Here’s how to resurrect your files.

I’ll spare you the long list of 7 demo software applications I downloaded and tried, without success, and just jump straight into the killer app that saved the day: Klix Digital Picture Recovery. This $29 piece of software is worth every penny, and then some. After scanning my sd card, it built a list of all of the missing files. However, it did NOT include a preview – which at first led me to believe the files were not recoverable. But in fact, they were.

The way I discovered this was by trying the nuclear option – a company called Aero Quartet that has a sweet piece of software for Mac that you can download to diagnose your broken Quicktime files, called Treasured. Treasured scans your damaged quicktime files, and tells you the odds that your file is repairable, and walks you through the steps of preparing it for submission to them, where a real human will look at your file, and attempt to salvage it. They will give you an estimate of how much this will cost automatically, and a real person will confirm it before you are charged. 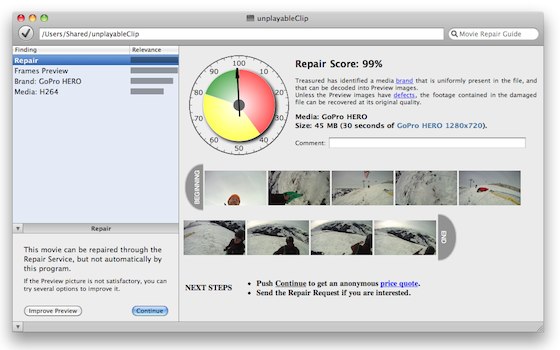 In my case, one of the diagnostic screens said “surprisingly, your file can be opened in quicktime.” I was all, huh? It can? I went back to the saved Klix file, and sure enough, it opened just fine. Audio was perfect too. Whew!

I’m grateful that I didn’t have to use Treasured’s more expensive service this time, but I’m grateful for their help diagnosing my file issues and really glad to know it exists.

And the next time the battery starts blinking red on my Canon dslr, you can bet that I’ll be changing the batteries BEFORE it goes dead.

UPDATE: The same software also works if you accidentally format your card before downloading the files.

I’ve been happily using a Zoom H4N digital recorder since last October to record audio such as interviews. I use it primarily with a AT875 shotgun mic, which requires phantom power. It’s no problem, because the Zoom has a mode that provides it. But I’ve noticed the price you pay for using phantom power, at least with my AT875, is reduced battery life. WAY reduced. I generally can expect about two hours max of record time. And if you’re using rechargeable alkaline batteries, that drops to less than half an hour, as I discovered this morning.

But here’s a far worse discovery that I made today, which amounts to a serious design flaw with the Zoom: if you’re recording when the batteries die, you lose everything recorded on the clip up to that moment (it saves a 0 kb file, rather than a file with your data in it).

Bottom line: the Zoom H4n is a great recorder. Just don’t EVER let it run out of batteries, and it eats them like candy, at least if you’re using it with phantom power and an AT875.

I can’t wait to see this film. It’s coming to Seattle’s Harvard Exit theater on April 23. This film is especially interesting because it’s being self-distributed, sort of, as much as that’s possible for someone whose identity is a secret. In any case, it’s coming to a theater near you, and if audience reaction at Sundance was any indication, it’s going to rock. Here’s the first 5 minutes: