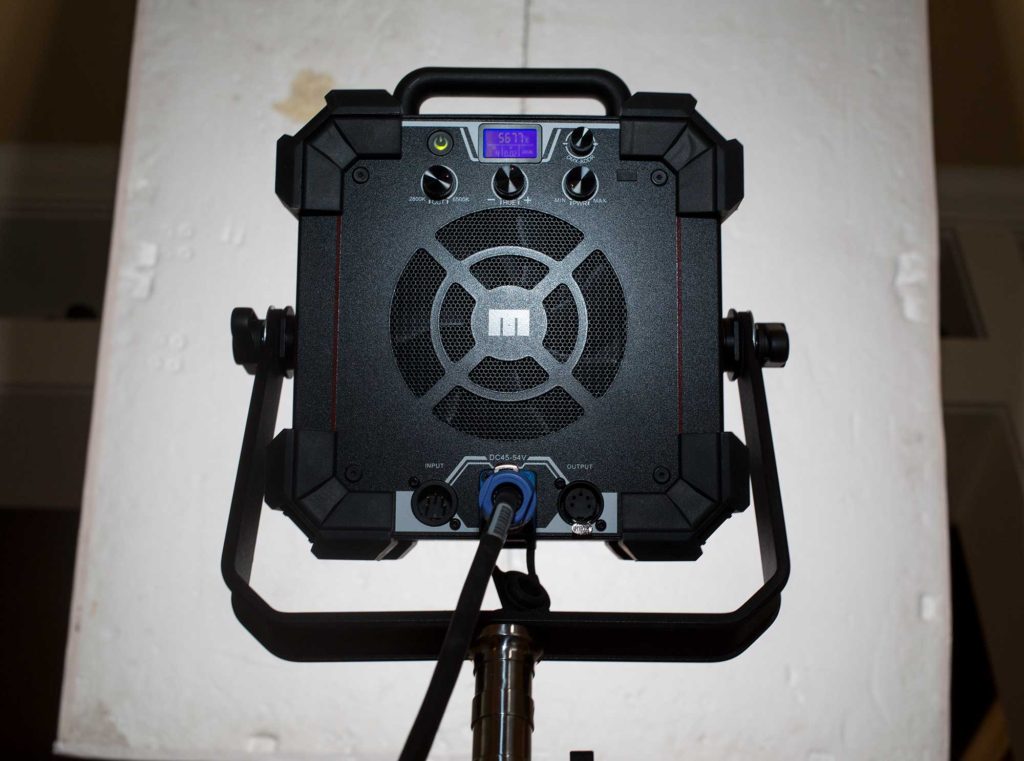 I got my hands on one of the new Fiilex Matrix LED location lights the other day. It was for a shoot that was unfortunately canceled, so I didn’t have a chance to use it on a job. But I tested it out, and I do have some observations I’d like to share.

The Matrix is quite compact – about 8.5″ square on the front, and 5.5″ deep on the side. It packs into a rolling case that would be easy to check on a plane, but too big for carry-on (though once you start checking luggage, you’re usually better off renting lighting at your destination, given how expensive extra luggage fees are these days).

This light has been billed as an HMI replacement. Others have described it as comparable to a 1,500 watt source. So I was keen to test its punch.

I found it most comparable to a 650 watt Arri fresnel in terms of intensity. A bit of a letdown in that department. But it’s much cooler in other ways.

Placing the Matrix side by side with an Arri 650, the beam of the Matrix with it’s unique quad fresnel lens is slightly wider than the 650 fully flooded. But it doesn’t focus, so it’s impossible to spot it like a 650. But the Matrix doesn’t really seem designed for use as a fresnel; it’s more at home bounced into foam core or diffused with a softbox.

With the fresnel attachment on, and the Arri almost fully flooded, the two lights match each other in intensity in Tungsten mode (at 15′, my Sekonic light meter gave me a reading of f/4.1 @1000 ISO @48th sec. shutter).

The Matrix’s ability to spit out daylight is very very cool. But by the time it’s softened through a softbox or bounce, I found the Matrix is no match for holding sunny daylight window detail in the background of a shot, unless you move the light very close to the subject. Way too close.

The controls on the back of the panel give you not only the ability to control color temperature and dimming, but the middle knob gives you plus or minus green, which could come in very handy on shoots where you’re trying to match fluorescent lighting.

The Matrix has a built-in fan that runs quiet enough to be inaudible in all but the most pristine recording environments.

The speed ring that is built into the M1 is larger than a standard ring, and the rental house told me it wouldn’t work with soft boxes other than the one Fiilex makes specifically for this unit. However, I was able to fit my medium Photoflex softbox on the M1 without too much difficulty.  But I sure wish the holes were slightly angled (about 15 degrees, like this speedring) to make removing the softbox easier. I found it a real pain to get boxes on and off, including the Fiilex box.

I long for the day when I can roll up to a location with an LED the size of the M1, and turn on the grid-cloth-punching power of an Arri M18. That day is coming. But we’re not there yet.

LED lighting is getting brighter by the year, and the M1 Matrix from Fiilex represents a step in the right direction.