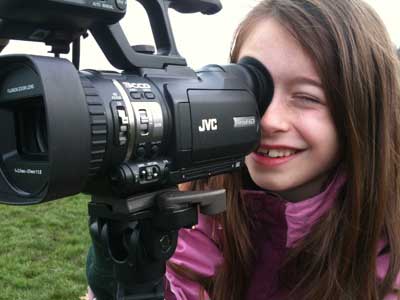 My 7-year-old niece can handle the HM100

Back when I was a professional photojournalist in the mid-90s, I preferred to be invisible when I was taking pictures. I was always after moments of truth, and recognized that the presence of a camera changed the way people behaved. So I kept my cameras small and my profile low. At that time, it would have been nearly impossible to have taken the same aesthetic into filmmaking. But today, thanks to cameras like the JVC HM100, it is becoming possible to shoot in full HD with a camera that’s smaller than the largest drink you can buy at Starbucks.

While working on Shine over the summer with co-director Ben Medina, I learned to appreciate quality optics. Ben owns a Panasonic HVX200, which is the workhorse of the indie filmmaking world. We used it for all the interview footage. We were also able to work a deal with Sunshine Whitton of AbsoluteTech, who rents a Red package, that allowed us to shoot quite a bit with this amazing – but very bulky – camera (the dreamy soft-focus opening sequence footage of Shine was shot on a the Red, which is why it looks so dreamy).

But when I got ready to buy my first camera specifically for documentary filmmaking this fall, I was looking for a camera that could accommodate my preferred shooting style. The Red was far too big, not to mention expensive at roughly $50k for a complete kit. I also ruled out the HVX200 as being too big for me, and I hate the Panasonic workflow (which uses tape, or expensive proprietary cards, or REALLY expensive and temperamental FireStore drives) that all have to be laid off and ingested into Final Cut before you can review the footage (more about that shortly).

When I learned about the Canon 5d and 7d from the outstanding blog of British filmmaker Philip Bloom, I thought I’d found the perfect documentary camera for me. The shallow depth of field and incredible optics available in a SLR-sized package was very tempting. Those cameras offer at least some of what the Red provides, for a fraction of the price and with a much smaller footprint. But after a lot of research, I concluded that the audio capabilities just aren’t there yet, at least not without strapping on a lot of extra things like external digital audio recorders or pre-amps. And I knew that I would end up lugging a ton of glass with me everywhere if I was depending on a DSLR as my primary documentary filmmaking camera, a thought I didn’t relish.

What I needed was a camcorder that included a fast zoom with a full range and professional audio capabilities, all in a package not much bigger than a consumer camcorder. And a tapeless workflow that used inexpensive SD cards would be nice, too.

I found the camera I was looking for in the JVC HM100. I first learned about it from this outstanding JVC HM100 review posted by Philip Bloom, which contains a short film he made in London using the camera. What immediately got my attention about this camera was its small size and its streamlined workflow. First of all, it’s tiny. It weighs barely 3 pounds. It’s got a quality Fujinon fixed zoom that gives you the 35mm equivalent of a 37mm – 390mm lens. It packs two XLR jacks that allow you to use it with a wireless or shotgun mic (and a cheap but functional shotgun mic is included when you buy the camera – but I recommend you do what I did and upgrade to something at least as good as a $200 Audio Technica 875 as fast as you can).

But here’s the thing that made the decision easy for me: this camera records data onto two SD cards at 35mps – not in some funky codec that has to be ingested before Final Cut can read it – no, it actually writes the file natively in .mov format. Translation: when you’re done shooting, you can simply pop out the card, drop it into a card reader on your computer, and drop it straight into a timeline on Final Cut. One word: awesome.

The camera does have a few shortcomings. Most notable: to get the small size, JVC equipped the HM100 with 1/4″ CCD sensors. That means you can forget using it for shallow depth of field of any kind except at the long end of the zoom range. That makes it not so great in low light. My second biggest complaint is that the iris controls are a bitch to use when shooting manually. You have to fiddle with a tiny lever at the back of the camera to change iris, rather than spinning a ring on the lens, which is what you’d expect to find on a professional camera. But I gotta say, aside from a few nitpicks like having to hunt through a long menu to turn optical image stabilization on and off (which I do frequently when using it with my Steadicam Merlin), that’s where my complaints end.

One of my favorite things about the camera is the ability to remove the handle, which contains the audio jacks, and go guerrilla. It’s entirely possibly to pass as just some schmo with a cheap camcorder, rather than a filmmaker. I did this a couple weeks ago on a film I’m making about a Seattle street artist, Ryan Henry Ward. He went to Home Depot to get some supplies, and I decided to film him there. I figured I’d film for as long as possible until getting kicked out. (The adage I learned in journalism school, “It’s easier to ask for forgiveness than it is to ask for permission,” applies equally to documentary filmmaking.)

As it turned out, they didn’t even notice I was shooting for nearly 20 minutes. When the inevitable security guard finally show up with “Excuse me, sir, you can’t use that in here,” he actually allowed me to talk him into letting me continue shooting. And I’m certain that was due to the fact that the camera did not look professional, hence in his mind I was just a shopper wanting to record the beginning of his friend’s art project. That, and Home Depot has some cool security guards.

Bottom line: This is a storyteller’s camera, a camera for documentary photographers who prefer a low-profile approach that allows them to keep their attention where it belongs: on their story, rather than on their equipment.

I purchased my HM100 from B&H Photo in this kit that includes a well padded Kata/JVC backpack that I actually use, and one 8gb SD card, for $3,500. No regrets!

I read a thoughtful interview with Marshall Curry recently, whose work I greatly admire, in which he explained how he become a filmmaker:

I really loved documentaries. I watched them and read about them obsessively, and for years I thought, “That’s what I’d really like to do.” Eventually I realized that if I wanted to make a documentary, I just needed to leap into the abyss and try.

No film school – he just picked up a camera and began a personal project that eventually became Street Fight, his first feature film. It ended up being nominated for an Oscar. The film is about the 2002 mayoral race in Newark, New Jersey, which pitted an idealistic political newcomer, Cory Booker, against a long-time incumbent, Sharpe James, famous for his use of questionable campaign tactics. (Bonus info: watch the film (you can instant-play the film on Netflix), then click here to find out what Cory Booker is doing today).

I’m looking forward to seeing Curry’s latest film, Racing Dreams, which won best documentary at the Tribeca Film Festival earlier this year and continues to rack up more wins as it makes its way through the festival circuit. (Side rant: I wish major festivals would offer an option to screen their selected films online when they are at festival for those of us who can’t fly to the festival to see it in person. Gigantic Digital is one ray of hope on this horizon, but their list of films is still pretty short, although you can screen some seriously great documentaries online there like The Wild Parrots of Telegraph Hill. I’d gladly pay the festival ticket price to be able to watch this current-year major festival films online.)

To continue my own education as a documentary filmmaker, I’m taking a cue from Marshall Curry by promising myself to screen 100 documentary films in the first 100 days of 2010.

I’ll be posting brief reviews of each film that I watch here, with an eye for how they were made, and outline the techniques and approaches aspiring filmmakers can learn from each.

So, what documentary films should be on my list? 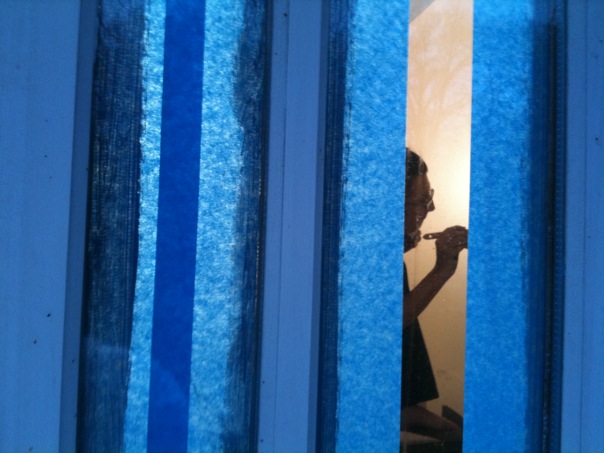 It’s my wife’s birthday on Dec. 30th. And it’s a big one: she’s turning 39 … for the second time. It was tough for me to find a birthday present to equal the weight of this event, but I found one: I’m painting the entire upstairs of our home in the colors of her choice. That’s something we’ve been putting off since we bought the place nearly 7 years ago. And after spending the last three weeks splattered in paint, I know WHY we’ve been putting it off: it’s a ridiculous amount of work. But damn, it’s looking good, and the end is finally in sight.

To complete the transformation of our upstairs, we found an amazing, huge sectional couch on Craigslist, and hired can-do Seattle contractor Bruce Blessing, whose been doing great work for us for several years, to install some killer lighting. We’ll have it all done in time for Lara’s birthday bash here on the 30th.

As it turns out, I have a secret motivation in doing all of this: to create an amazing screening room for documentary films. The more I work on my own films, the more I appreciate the great work that other filmmakers have done and are doing, and I’m tired of watching them on my laptop. We’ve got a projector that shoots an 8-foot picture, and I just upgraded our internet to 12 mps. Netflix documentary queue, here we come.

What’s a year if it’s not full of changes? 2009 held some particularly big changes for me, most significantly my largely accidental decision to make a film, Shine: The Entrepreneur’s Journey. The film grew out of an event Biznik hosted in May, which was designed to help entrepreneurs create video profiles. Trouble is, nobody was signing up to attend the event. I was brushing my teeth one morning and had the idea: why not tell people we’re making a film, and the best stories will be included? 500 people showed up. So, we actually had to make a film. I ended up falling in love with the process of research, discovery, conversation, techno-geekery and collaborative magic that is documentary filmmaking.

So in August, I handed the reigns of Biznik to our hugely capable cofounder Lara Feltin, and chose to dedicate myself to documentary filmmaking full time. It’s a bit of a scary move, as career changes tend to be, but I know it’s the right one for me. And it’s a homecoming of sorts, signaling a return to my roots as a journalist, but with the freedom to strongly express a point of view that is all my own.

I’m creating this blog to share my personal journey into the fast-changing world of documentary filmmaking. In it, I’ll share the latest tools, techniques and resources for powerful visual storytelling, and spotlight the extraordinary work of other documentary filmmakers who are dedicated to doing meaningful work. And of course, use it to promote my own work with behind-the-scenes looks at work in progress.

A good blog, like a good business, should have a concise mission statement. Here’s mine:

To promote myself and all filmmakers dedicated to producing rigorous, inventive documentary films that matter.