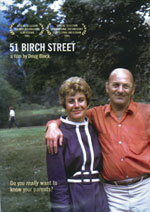 51 Birch Street is a tough doc to get your hands on. I was able to find a copy on Ebay, after reading about it in Documentary Storytelling, a fantastic book. I figured it would be a perfect film to screen back-to-back with Daughter From Danang, for two very different takes on parent-child relationships. This film is much more personal in it’s approach than the journalistic Daughter – to the point where I wasn’t surprised to see Ross McElwee included in the thanks column during the credit roll. But while this film is worth watching, it’s no Sherman’s March.

Synopsis: After his mother’s death, filmmaker Doug Block sets out to discover the parents he never knew. With the help of his mom’s diaries, interviews with his father, family friends, his own archival footage and family photos, his quest uncovers what to him are shocking discoveries of infidelity and marital unhappiness that ultimately call into question his own marriage and leave him wondering whether he should have opened the diaries in the first place.

Cinematography: This film makes heavy use of still photos, but unlike Daughter from Danang, the filmmaker is very much a character in this personal documentary. Not only does Block narrate, but he also is visible, and at one point his father turns the camera on him, a nice (but unrevealing) twist. Memorable shot: Block shoots his mother while she’s still alive in a hallway, and later cuts to the hallway empty to show how empty it is without her. Then we see his husband’s new wife in the same hallway a few weeks later, which visibly notes the passage of time. Interviews are shot with subjects looking very nearly (but not quite) into the lens, which I like a lot.

Story Structure: The film picks up the story with his Mom still alive, with him talking to her, and talking up why he’s making the film using narration. Then his mom dies, and from there on the film makes frequent non-linear trips down memory lane. But for the most part, it’s following the chronology of his parents life up through the present, and ends with his father driving off into the sunset towards Florida with his new bride.

Adultery is a hot-button topic, which I guess saves this otherwise unremarkable film for a lot of people who are surprised that adultery happens. I don’t mean to totally slam it, but the sense of mystery that builds at the beginning of the film is never really paid off for me. The big discovery is: One of his parents was cheating on the other, but they put on a smiley face and stayed married.

Maybe it’s just me, but I’m not shocked by that. That married people cheat is the opposite of surprising. And even though there’s a little twist in that the person who was committing the adultery isn’t the one you initially think it is – I still never managed to climb on the story train of this film the way I did with Sherman’s March or Daughter from Danang. I give Block props for trying, though. He even acknowledges in the beginning of the film that he never thought he’d find himself making a film about his perfectly normal, suburban parents. And I give him major props for making a film about the things that are right in front of him – that’s always where filmmaker gold lies. But one man’s buried treasure is another’s recycling bin, and for me, the story just didn’t resonate.

Editing: To make the story work, Block translated the handwriting of his mother into typewritten pages and then zoomed into keywords in bold (other words on page greyed out) to help his narration as his gets closer and closer to the big discovery. This is a nice device that keeps building suspense and calls out the important bits with authority. In particular I liked the fast scrolling with sudden stop on the surprising words. There’s also lots of slow zooming and panning through family photos. I found all of this pretty tedious by the end of the film, though, possibly because I felt like it never added up to any big revelation. One nice transition I liked: one of the text slides starts to blur before dissolving into a photo. Nice.

Music and Sound: There’s a lot of piano music in this film, which worked OK, but not remarkably. One thing stood out: in the credit roll, Block credits the person who got music clearances for him. Great idea – edit the music you want, and hire someone to get the clearances for you. There’s a job for everything in the film biz, it seems.