When Lisa and I began shooting Beyond Naked last year, we wondered if anything was happening at the exact opposite celestial time of year from that other Solstice, which would become the climax of our film. We got wind of a strange bunch of people who ride all night long on that darkest of evenings, and we knew we had to meet them.

Ride organizer Joe Platzner graciously allowed us to follow him and his posse though the night. It was a great adventure, and we met some amazing people. Two of them, Greg Cox and Andy Speier, later joined our filmmaking team on June 18 and made a big contribution to our successful event coverage. Some of the footage we shot during this ride will likely also appear in the film, which we’re currently editing.

I cut this video to help promote this year’s ride (although I can’t imagine why they’d have any trouble finding people to join them!) If you’re interested in learning more, check out their site at http://www.seattlerandonneur.org.

This is a seriously smart project. The more I think about it, there are a lot of situations where this would obviate my need to haul around a 3-foot long cineslider. And just a little controlled movement can really go a long way to adding polish to footage of all kinds, from quick iPhone grabs to carefully rehearsed DSLR shoots. I’m in!

Every since I learned about LitePanels a couple years ago from Werner Herzog (who used them shooting Cave of Forgotten Dreams), I’ve wanted to own one. But the price tag approaching $2,000 has been a deterrent. Luckily, a lot of other companies have begun making LED lights over the past couple years, and some relatively inexpensive, quality alternatives have begun to appear on the market.

A couple weeks ago I learned that LitePanels is attempting to create a monopoly on LED lighting for itself, which would ensure that LED video lights sold in America will continue to be overpriced. Seems they own one of those vague, overly broad patents that the patent office hands out like candy nowadays, and they have the money to enforce it (it can cost as much as $5 million to defend against such patent claims, forcing even large corporations like Sony to settle out of court when faced with such action).

What’s intriguing is that the LitePanels cases are being heard in Texas Eastern District Court, which Ira Glass recently reported on in an expose story about patent trolls on This American Life, When Patents Attack.

But I digress. The LitePanels patent case has achieved at least something positive: it’s spurred me to purchase an affordable alternative while they’re still available. I recently purchased the CN-900 LED light, which is available on Amazon for about $450, after watching this review. I’ve had an opportunity to use the light on a project, so I’d like to add my observations.

The conference trailer I just finished for the upcoming Seattle Interactive Conference was a great opportunity for me to try out the CN-900 LED light. We shot 6 interviews with VIPs on tight schedules, making it essential that we set up quickly to get the job done. We asked for 20 minutes to set up our lights, 20 minutes for the interview, and did our best to stick to that. The easy transport and fast setup time of the CN-900 light was a big part of how we stayed on time and made the interviews look good.

Here’s a frame grab from each interview (key light was CN-900 in all cases): 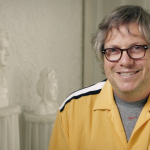 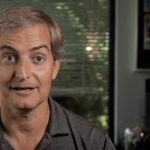 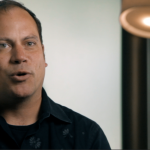 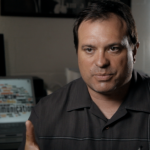 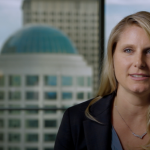 Key observations about this light:

As reported elsewhere, the AC power cable is a real design flaw, because the weight of the DC converter hangs and puts stress on the connector when the light is on a stand. The solution is low tech and simple: form a loop out of the cable about 6 inches from the tip, and fasten with gaff tape. Then, hang the loop on one of the stand’s knobs, relieving pressure from the connector. See photo below: 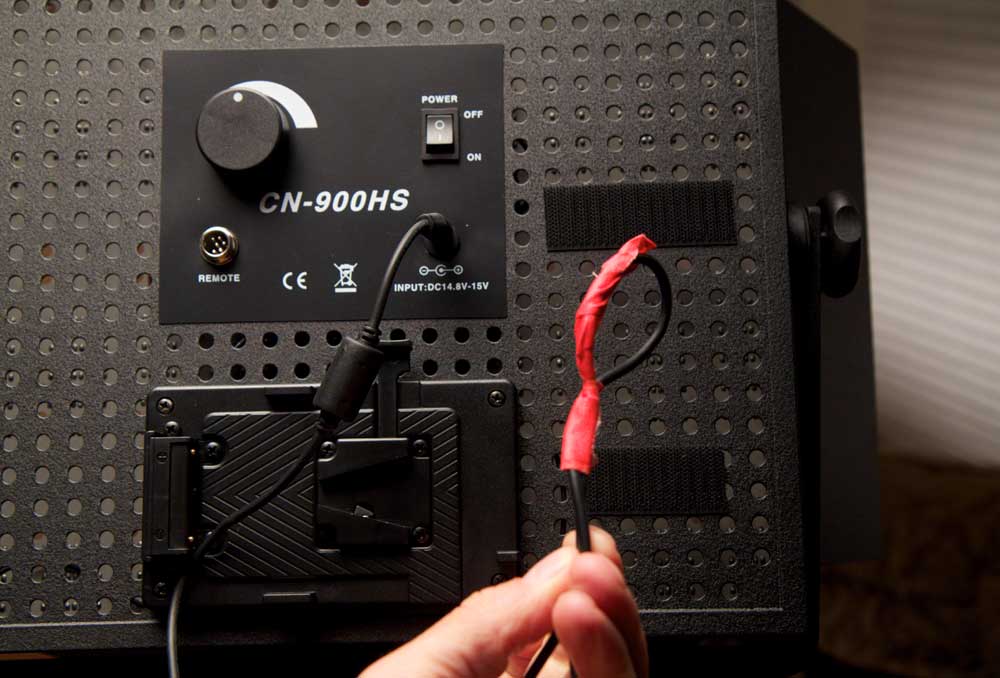 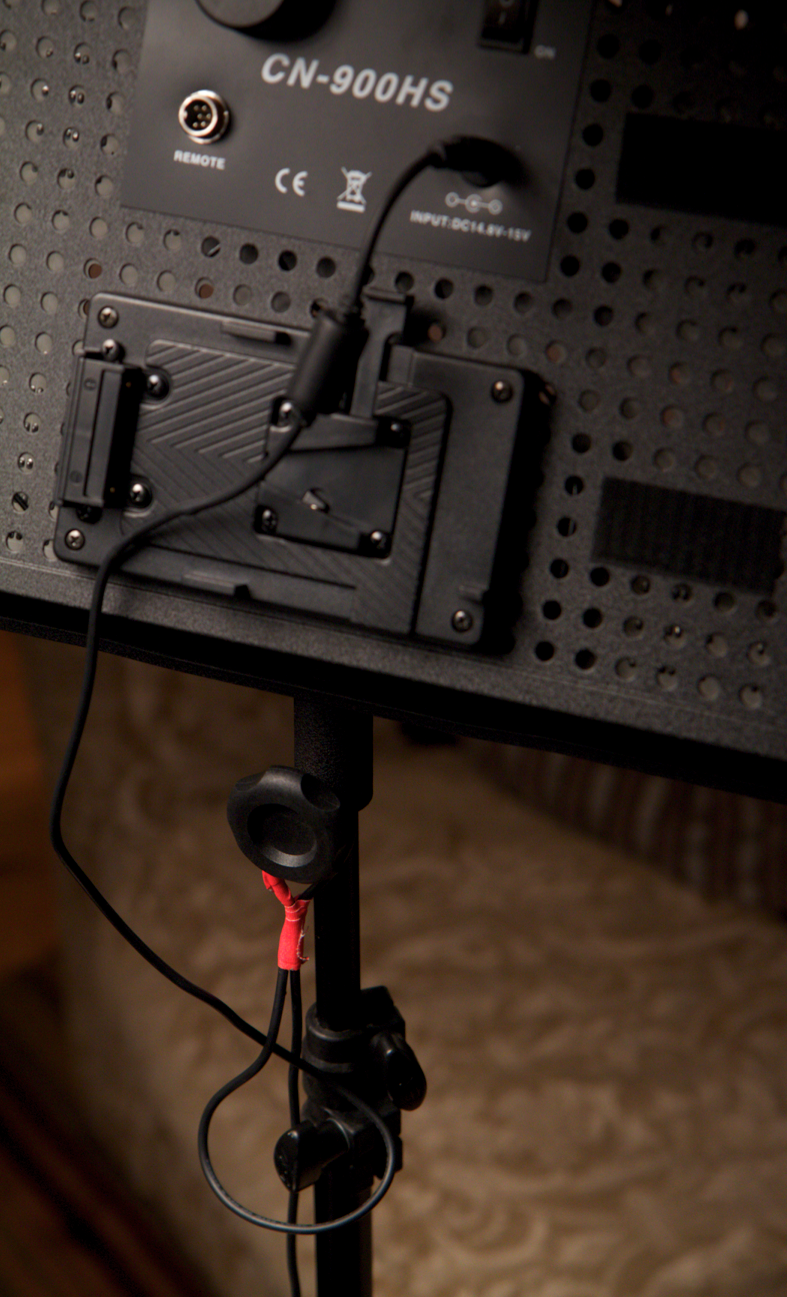 What’s great about the CN-900 is that it can be battery powered – by the same Tekkeon myPower ALL Plus MP3450i Battery (5-19V) that I use to power my audio bag. Yes, the CN-900 comes with a Sony V-mount plate, but V-mount batteries are twice the price. The Tekkeon is just under $140. And I’ve discovered a few tricks about how to get the most from it. 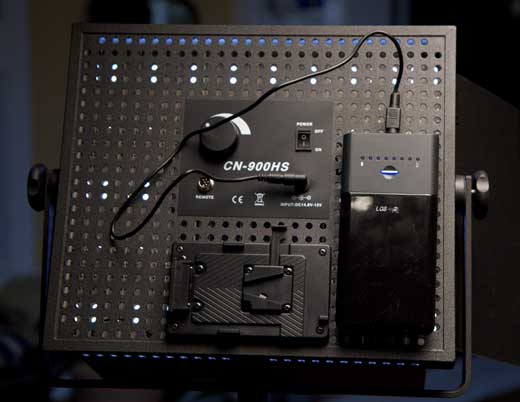 Use velcro strips to attach the battery to the back of the light. Be sure to set the correct dip switch voltage (15 volts for the CN-900 LED) before powering up your unit. 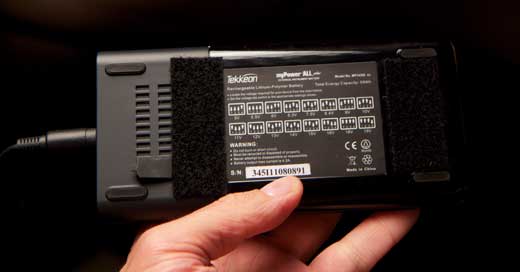 If you power the CN-900 at full blast, it will run for just under 30 minutes on a full charge (27-29 minutes in my tests). Then the light will abruptly shut off, going from full power to nothing without any dimming beforehand. But what’s intriguing is that the battery shows half to 1/3 power remaining at this point. It seems that powering at full power for half an hour causes the battery to overheat, triggering the shutdown, even though there is quite a bit of juice left. After letting the battery cool for a minute, I was able to switch the light back on at half power, and it ran for an additional 40 minutes. So as long as you don’t need full power, you can get a lot of time out of this battery. It takes 3.5 hours to recharge the Tekkeon.

Update: V-mount battery powers CN-900 for more than an hour

Update: How to color match a pair of CN-900 LED lights 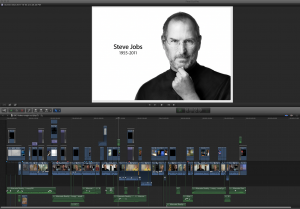 As the world says good bye to its greatest entrepreneur, I tip my hat to you, Steve, the man who made so much of my creative life possible. From the time I entered college until yesterday afternoon, when I finished cutting a short commercial video that will help me pay for keeping my daughter in the same school, your products have brought my dreams within reach. Thank you.

I’m happy to announce the launch of a commercial piece we have completed for the Seattle Interactive Conference. For this video, Lisa and I interviewed 6 leaders in the local interactive scene, all of whom will be speaking at the first-ever conference in November. Since we had no footage from past events on which to draw, we went straight to the people who will be speaking at the event, and had a wide-ranging conversation about interactivity. Here’s the results:

Special thanks to Adam Sheppard of 8Ninths and Jamie Monberg of Hornall Anderson, who provided us with a substantial amount of the footage we used in cutting the video. And to the rest of the very busy people – Ed Fries, Vanessa Fox, and Shauna Causey – who made time for us and our equipment.

Tech details: We shot all the interviews on location with a two-person crew, myself (camera and editing) and Lisa (sound and production). I shot with Canon 60D, using a CN-900 LED as key light (a great light for traveling with, which I’ll blog about soon). I cut the piece on Final Cut Pro X 10.1, which is definitely more stable than the previous version. The biggest gripe I have about FCPX in the wake of finishing this piece, is a minor one: it’s tedious to color correct similar clips, because I found that cutting and pasting effects such as color corrections is unreliable when I had complex masks, audio filters, and third-party filters such as Magic Bullet Mojo, which I used to squeeze skin tones.

The opening shot I grabbed with my Canon S95 last Christmas on a family trip, as we were landing in Kito, Ecquador. Proving once again that the best camera is the one you have with you. After today’s big Apple announcement, I’m sure I’m not the only filmmaker lusting to have that be an iPhone 4s.