I just finished shooting a short film called Pearl, for Seattle director Amy Sedgwick. It’s a film about a woman who works at a small oyster cannery who dreams of a bigger future for herself. When the opportunity arrises, she seizes it. 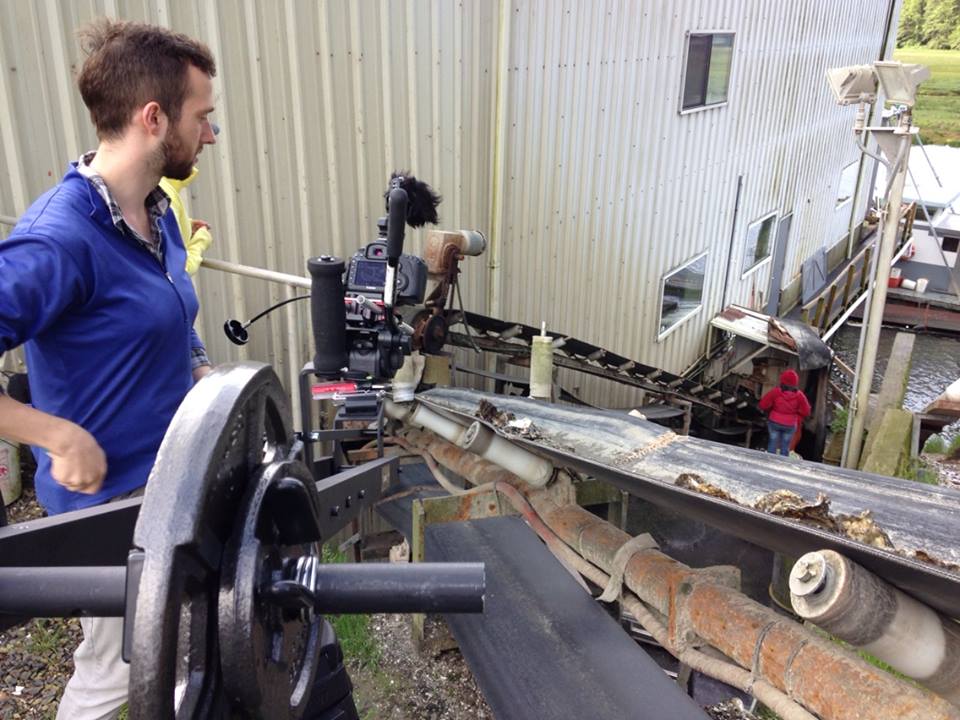 When Pro Am gave me a chance to review their new Taurus Jr. heavy duty camera crane, I jumped on it. A jib shot would be the perfect way to establish the first location in the film, as the two women enter the cannery for the first time, by revealing something of the environment and at the same time advancing the story. And there’s nothing like using a piece of equipment on an actual production to discover its strengths and weaknesses.

As you can see from this clip, there was a bit of wind that we had to contend with. And, we had a manual focus pull, too. The camera I shot the film with was a 5dmkiii (shooting Magic Lantern raw) fully rigged up with v-lock battery, etc. So it weighted about 10 pounds.

The Taurus Jr. enabled us to get this shot where many smaller, lighter weight jibs simply wouldn’t have cut it. I own an Aviator Traveler jib, and while it’s an amazing bit of gear, it would have never held steady for a focus pull, much less the wind.

After using this jib, I really appreciate the benefit of a heavy-duty jib for getting consistent, repeatable results on location, on deadline. You don’t get to control the weather. But you still have to shoot your film.

Weather aside, what is it that really keeps filmmakers awake at night? Money. There’s never enough of it. That’s where the Taurus Jr. really shines. At $399, it costs less than a third what comparable jibs do. I get excited whenever I can put more money into paying actors and crew, and the million and one other things that have to get paid for to bring a creative idea to life, rather than sinking it into equipment.

This jib doesn’t quite come with everything you need to get up and running. You’ll need to buy some weights for balancing it. Luckily these are inexpensive and I came home from my local Big 5 sporting goods with everything I needed to get going: a couple of 2.5lb weights, a couple 5lb, and a 10lb. That combination gave me plenty of options to keep various camera rig configurations flying in perfect balance.

At four feet, this isn’t exactly a long jib. Isn’t bigger better? Not for me, it isn’t. I am a real fan of subtle jib moves, rather than the big sweeping ones. A little move can go a very long way. And the ease of transporting and setting up a 4′ jib compared to an 8′ one is like night and day. The best tool is the one you will have with you when you need it.

To keep costs low, presumably, the Taurus Jr. designers cut one corner that I wish they hadn’t. The horizontal brake is really flimsy, and doesn’t precisely stop the jib from moving a little back and forth. If there’s one thing I’d change about this jib, it is this. And, there’s no easy way out of the box to mount a monitor – you need to purchase an accessory arm for that.

Cons:
The only major flaw with this jib is the horizontal brake. It is flimsy, and doesn’t reliably work.

Wish it came with:
Monitor mounting point. A monitor arm is available as an accessory.
It’s awkward to transport easily – need to get the optional carrying case, really.

Bottom line:
This jib is a winner for budget productions that need a short jib that can produce consistent, repeatable moves in a variety of conditions. I like it so much I’m probably going to buy one next time I’m on a production that needs a jib. And when you start thinking about shots, it doesn’t take very long to dream up amazing shots that only a jib can bring to life. Thanks to Pro Am and the Taurus Jr., budget-conscious filmmakers can stop dreaming and start shooting.

I’ve been invited to teach a private DSLR cinematography workshop, and I thought, why not add a few more spots and make a day of it? So if you’re looking to get cinematic with your DSLR, consider joining us on May 31!

DSLRs are incredibly powerful filmmaking tools – in the right hands. Why not your hands? Join award-winning Seattle filmmaker Dan McComb, a cinematography instructor at Art Institute of Seattle, for a day of hands-on instruction that will take your DSLR cinematography skills to the next level.

Dan will share techniques and equipment secrets that will empower you to tell stories that connect with your audience.

You’ll learn why shooting manual beats autoexposure, and which settings to pay attention to most. Why using neutral density filters is essential for shooting outdoors in daylight, and which ones are the best value (as well as which ones to avoid). Why shooting closeups is different than shooting medium and long shots, and what that means for lighting.

We’ll take a look at aspect ratios, and how to shoot widescreen for that super cinematic look and feel. You’ll learn how to build an action-ready camera package from the ground up using matteboxes, baseplates, battery distribution systems, and much, much more, including answers to your questions.

Workshop is limited to four participants.

As I’ve moved more and more to a raw workflow with my 5dmkiii, I’ve now got 6 CF cards, all 64gig 1000x. Keeping the same version of Magic Lantern installed on all those cards has become a problem, especially since I like to keep all my cards current with the most recently nightly build. So I was thrilled to discover recently that it’s possible to install Magic Lantern on an SD card, which stays with the camera, and then you just use empty CF cards for recording. A simple tip, but it’s been a big time saver for me. Thanks to the fine folks at Lensrentals.com for sharing this tip.

The Experimental Education Unit is a school, located on the north side of the Montlake Cut just inside the University of Washington campus, that does impossible things every day by putting special needs students into classrooms with their typically developing peers.

This video, which Lisa Cooper and I produced for the University of Washington, was shown at a fundraising auction this weekend. It features founding director Dr. Norris Haring reflecting on his dream for the program, which is today a reality.

This is the second video I’ve made for EEU (the first one you can see here). I wanted to get as close as possible to the amazing faces of the kids, so we shot with 100mm macro and 80-200mm zoom for much of the production. I also shot quite a bit of 60p, which at times I conformed to 24 for some lovely slow motion.