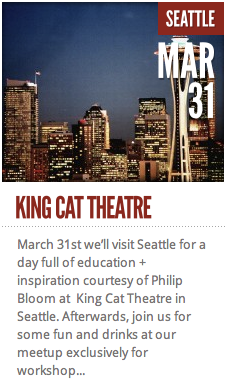 Lisa and I are taking a day off shooting Beyond Naked to attend Canon Filmmakers Live with Philip Bloom today.

Philip’s combination of talent, humor and boundless curiosity for the latest thing in DSLR filmmaking have made him an icon of the revolution.

I’ve been following Philip’s blog for two years, and it’s safe to say that half of what I (technically) know about DSLR filmmaking I learned from him. Kind of a strange thing, to have learned so much from someone so far away, who I’ve never met. Looking forward to thanking him in person today.

Today I got a Facebook message asking the following:

I recently saw your video piece about la figa and am curious about what kind of equipment (and crew, if any) you used when you were following tiberio around the market. The sound is amazing!

I’ll soon be doing a piece very similar to yours (i.e. a chef walking through a farmers market and fondling vegetables), so i’m especially curious about how you handled the situation.

I’m sharing my reply here in hopes that it answers the question for a wider audience at the same time.

First off: here’s the short piece. Watch it with your ears:

If you paid attention to the audio, you’ll have noticed that the first words out of Tiberio’s mouth are poor quality audio, which gets dramatically better in the next scene after he beckons us into the market. That’s for a simple reason: I forgot to roll my dual-system sound on the first shot, and the audio you’re hearing is reference audio recorded with the crappy internal mic on my T2i. OK, with that admission out of the way, let’s talk specifics about my setup.

The short story: use a lavalier. That’s it. Read on if you want the longer version.

Crew: Just me, and Tiberio (the chef I was filming).

First tip for recording audio in public places: keep a low profile. If we had walked into the market with even a 3 or 4 person crew, we would almost certainly have had a much harder time getting the kind of spontaneous shots we got with just the two of us. Most people probably thought I was just taking still photographs on some kind of funny handheld camera-stabilizing device. In subsequent market shooting with a 4-person crew, we were on one occasion asked to leave a market because we didn’t have advance permission to film there. You can’t get great audio unless you’re there!

Second tip: use a lavalier. I’ve since shot in crowded markets on numerous occasions, sometimes with a handheld shotgun mic. And I’ve found that using a lavalier is the way to go in crowded spaces. Why? Because you get the mic within inches of the subject’s mouth, allowing you to separate the signal from the noise cleanly. A shotgun mic is going to pick up way, way more of the background noise, and it’s not going to reject the off-axis sound very well if you’re in an indoor situation such as this. And as you can hear in this clip, the lav is even enough to pick up the other person that Tiberio is talking to (although if the success of your piece depends on getting great audio of more than one person, the second person should be rigged with a lav as well).

Third tip: Rig the mic before you arrive. I taped the Sennheiser ME-2 lavalier mic to Tiberio’s chest, so we were ready to roll the moment we arrived and no more fussing was required. I’ve since upgraded to a Tram TR50 mic, which is far superior in audio quality, but the main thing is to get whatever mic you have close, and using a lav accomplishes this perfectly.

Fourth tip: use a small shotgun mic on your camera to record reference audio. In this video, I didn’t do that. This video’s audio (including the first shot at the beginning where I forgot to turn on the recorder for the lav) was simply recorded by the T2i’s built-in mic, which sucks, frankly. Even so, I was able to mix in some of the reference audio in one place – the scene where Tiberio is feeding tourists peaches, and you hear the vegetable stand girl’s voice saying “don’t worry, we wash our hands at least once a month” in the background.

If I were shooting this tomorrow, the main thing I’d do different is I’d record reference audio with my Rode VideoMic Pro, by far the best mic for on-camera recording with DSLRs. But be careful: in loud crowd scenes shooting with my Canon 60D, I’ve discovered it’s easy to exceed and clip the audio recorded with VideoMic Pro when it’s set to +20db, even when you set the recording level on camera to just 1. So be prepared when things get loud to slide the +20db over to 0 or even -10db as required by the environment.

There’s an excellent conversation happening right now on D-Word, the online community for documentary filmmakers. Peter Broderick, host of the conversation, is an expert on the changing distribution models that every filmmaker needs to understand.

I learned about a couple of new services that I’d never heard of, in particular one called Distrify that allows you to embed your film as a free preview or instant paid viewing on social media sites, in same way you would a Vimeo player, only you get to charge money. Distrify takes a 30 percent cut. And, I got some great ideas for promoting and distributing the film I’m currently making. 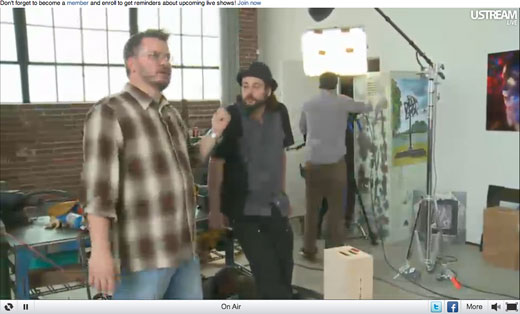 I tuned in today to Vince Laforet’s CreativeLive workshop, and much to my surprise I discovered that my friend Miguel Edwards is the artist who is being featured in the documentary film that students are creating this weekend. Go Miguel! Yesterday’s workshop was pretty lame, with Laforet spending a lot of time doing weak overviews of Adobe products that he obviously didn’t know how to use himself. But today is back on track and well worth watching. Here’s the link: http://creativelive.com/live. I also caught a glimpse of Seattle photographer John Cornicello in the background of some of the shots, where it appears he’s on the crew as gaffer. He’s one of the people I’ve interviewed for Beyond Naked. Nice to see some familiar faces at this high-profile workshop.

This Seattle documentary film has been shot and needs to raise a small amount of money to complete the film. A small donation can help it across the finish line.