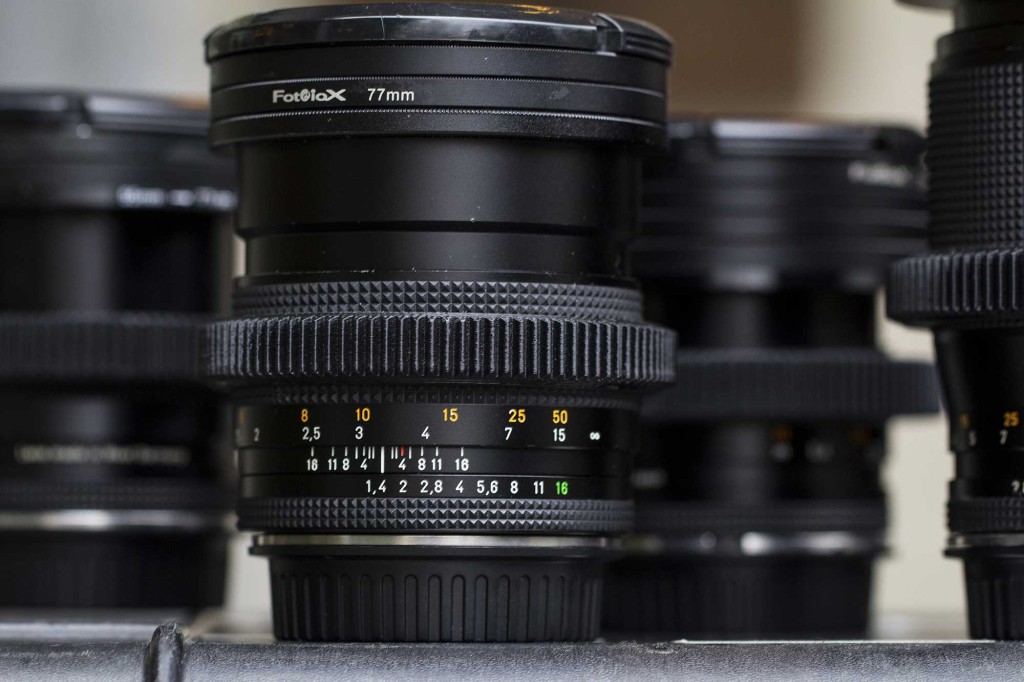 Why do I love my Contax Zeiss primes so much? I prefer them over Canon zooms just about any day. At least, any day I have time to change lenses between setups. Consider the following two frame grabs of my coffee mug… 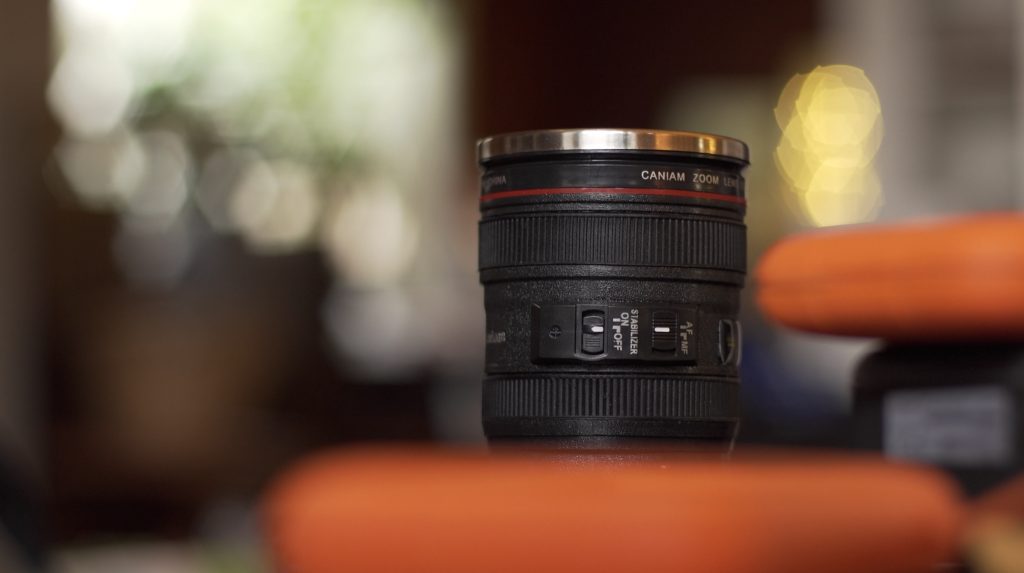 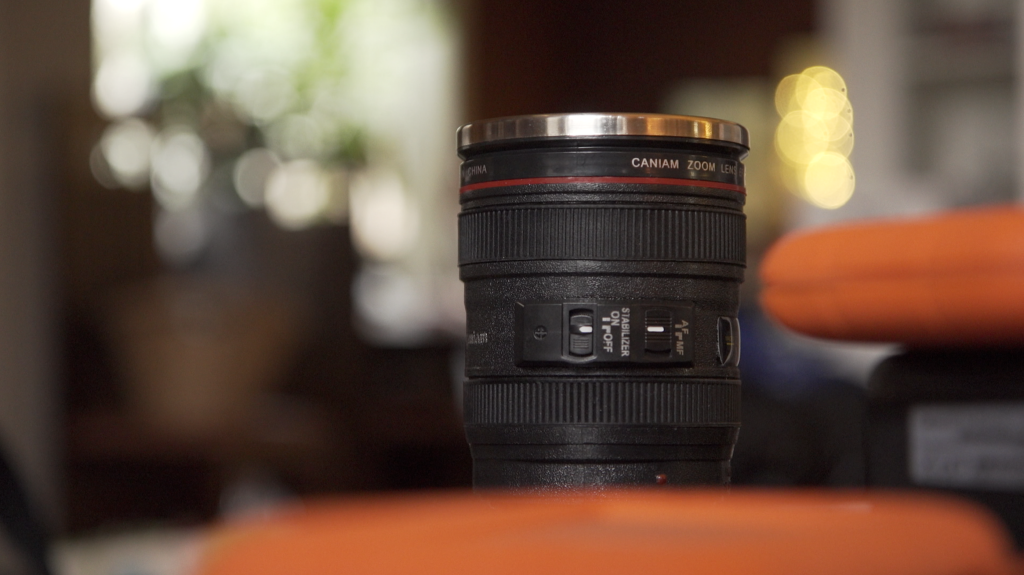 Besides being faster (enabling me to shoot the first frame at ISO 1000 and requiring the second one to be shot at ISO 1600), the Zeiss has a dreaminess to it. And that bokeh with it’s hooked aperture blades? Pure magic. The Canon has a little higher contrast both in color and luma. But I would call that “clinical sharpness.”

Nevertheless, if you see me rolling handheld you’ll probably see me rocking a Canon zoom, for one reason: the ability to keep shooting without having to change lenses all the time is priceless for documentary work. Not to mention that you can do with a single zoom what you’d need a whole Pelican case full of fixed lens glass to do.

But if I’ve got the time, don’t get between me and my primes! 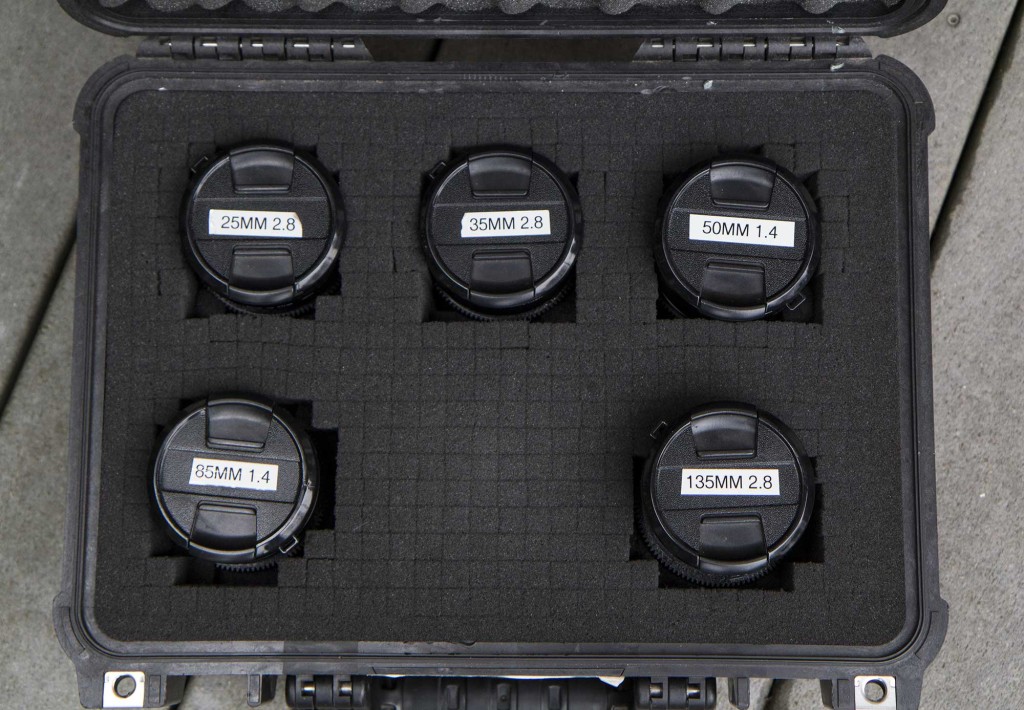 Six years ago this month, my journey into documentary filmmaking began with the purchase of my first video camera, a JVC HM100. I loved that camera: it fit perfectly in my hand, used inexpensive SD cards, had built-in ND filters, and great audio capabilities. But its 1/4″ CCD sensor left me wanting more.

I used a rented Red One to shoot part of my first film. Since then I’ve used many cameras. I shot a feature length doc with a pair of Canon 60Ds, captured slo-mo with the FS700, and fell in love with the Canon 5dmkiii for its full frame, shallow focus look. Recently I’ve come to prefer the super 35 Canon C100mkii for it’s ergonomics, autofocus and color rendering. But none of them fit as nicely into my hand as that first camera.

This December, I am putting my end-of-year money on the Sony FS5. I’ll have plenty to say about this camera shortly. But as I await delivery today, I’m reflecting on how far cameras have come in six years.

In terms of image specs, the FS5 isn’t THAT big of a leap. Six years ago, there was a super 35 digital camera that could shoot video in 4K, at slow frame rates (albeit only 120fps). It was called the Red One. It boasted 11 stops of dynamic range, weighed a ton, and cost $17,500 (body only).

Six years ago, Red was roiling the market with big promises of “4K for $4K.” That never happened. Six years later, 4K is really an option. We have many cameras, most notably DSLRs from Sony, that can do 4K for considerably less than $4K. But I’ve learned over the years that a DSLR is an awkward choice for filmmakers. We need ND filters, audio options, and much more that has to be bolted on to DSLRs. Nevertheless, after 6 years of waiting and jerry rigging, we finally have a camera equal or superior to the Red One (including raw output coming in a future upgrade), that fits in your hand, for less than $6K. Amazing.

First observation: Good cameras still ain’t cheap. Six grand (the cost of the FS5 with an extra battery and EF lens adapter) is a lot less than $17,500, but it’s still a serious chunk of change. It’s almost twice the price I was willing to pay 6 years ago for my  JVC-HM100. And given the ease of renting through sites like lensrentals.com, $6K is on the outside of what I would consider spending to own any camera.

Camera sensors are currently evolving at the pace of Moore’s Law, so it’s a sure bet that, two years from now there will be another, better camera. However, I can sell my FS5 in two years for at least half of what I bought it for today. And in the mean time, I’ll be making money with it. So it definitely makes sense for me to own it at this price.

Apart from price, the biggest change is that today, small can be good. This is a really big deal. It’s not just a question of convenience. For me, it’s the difference between doing and dreaming. I can rig up my 5dmkiii into a very capable camera capable of shooting amazing, 12-stops dynamic range raw HD video (with Magic Lantern). That’s the combination I used to shoot Pearl, which won best foreign short at Milan this fall. But shooting with a DSLR is a pain in the ass. After making that film, I gravitated toward the C100, which doesn’t have to be rigged up: you just turn the camera on and start shooting.

So why am I not purchasing a C100mkii this year? The two things I most love about this camera – autofocus and color – are awesome. I have no doubt I’m going to miss them on the FS5, which requires a lot of work in post to get good results from the SLOG footage, and has mediocre autofocus. Even the fact that the C100 is 8-bit, and the FS5 is 10-bit in HD, doesn’t make that much difference. In my experience, 8-bit color from a C100 looks every bit as good as 10-bit from a Sony. For me the big thing is dynamic range.

Compared with 6 years ago, camera dynamic range is much improved today. The FS5 has seduced me by promising to give me almost everything I want in terms of image quality and features, in a camera I can fit into my hand, that has 14 stops of dynamic range. Fourteen stops! A documentary filmmaker can never have too much dynamic range.

I’m also seduced by the ability to shoot 4K, even though I doubt I’ll use it much because it slows down my edit. But there are situations, for example shooting an interview, where 4K will allow resizing the shot in post in to pull a closeup from a medium shot, effectively giving me a two-camera shoot from a single camera. I want in on that.

SD cards are still king. When I bought my first camera six years ago, a big selling point was that I could use small, affordable SD cards rather than being forced to buy something expensive and proprietary like P2 cards or red min-mags. While the competition seems to be moving toward expensive CFast cards, Sony releases a fully-speced camera that uses cheap, widely available media. I love that.

I’m looking forward to hand holding again. The C100 is ergonomically great, but it wants to be on a monopod. The soul of shooting for me is handheld. And I look forward to finding that soul with the FS5.

This is exciting: a $200 device that turns your iPhone into a color-temperature meter. The closest thing to this is the Sekonic SpectroMaster C‑700R, but that will set you back $1,700.

I’m not the only person who was excited about it: their Kickstarter campaign was funded in just 3 hours today.

The Lumu Power will be very useful in matching a fill light to ambient lighting conditions, for example. Or matching two LED lights, or just for figuring out what color temp the light is under any situation.