I’ve had my replacement DroboPro humming along nicely for a few days, but today marks the end of all that happiness. This afternoon, the same thing began happening as before with this new unit: while I’m working, it’s somehow partly disconnecting or actually disconnecting, causing my apps to freeze. The funny thing is that the Drobo remains visible in the finder. All my apps freeze up and get the spinning beachball of death whenever I try to navigate into the file structure below one or two levels down.

I’m almost certain that this is an iscsi problem, because this never happens with firewire 800. But I hate using fw800; it’s too slow for me to edit hd video on.

Guess it might be time to get that new Thunderbolt drive sooner rather than later.

Let me begin with a disclaimer: I hate internet advertising. And I know hate is a strong word. But let’s face it: advertising sucked in newspapers, and who reads them any more? It sucked on TV and it sucks on billboards. Advertising is the primary reason I almost never listen to the radio (but joyfully listen to podcasts), and don’t EVER watch TV (No, I don’t count watching Battle Star Galactica on Netflix as watching TV).

When I was running Biznik, we experimented with advertising as a business model. It failed utterly. So few people clicked the ads, that we didn’t even generate enough revenue to operate the servers. It’s my opinion that advertising as a revenue model works on only the largest of sites. I doubted it would ever work on Facebook, and it didn’t for the longest time. But then Facebook became so big that even a ridiculous, antique business model that depended on them annoying their members could, and does work for them. But I’ve never clicked on a Facebook ad.

Until today. This is the ad that caught my eye: 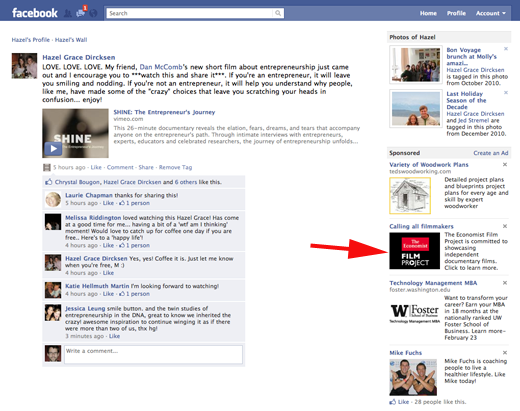 I was reading a post that my friend Hazel Grace made about my film, Shine: The Entrepreneur’s Journey, which became available online last week (thanks Hazel for posting that!) and the words “Economist,” “independent” and “film” entered my consciousness somehow from the right sidebar that I normally tune out completely. Just goes to show that advertising does penetrate our consciousness on some level. So I click on the ad, and discover what is perhaps the PERFECT venue for my film: The Economist, in partnership with PBS NewsHour, is looking for films that they can cut into 6-8 minute segments for airing on NewsHour.

“…the project will feature films whose new ideas, perspectives, and insights not only help make sense of the world, but also take a stand and provoke debate.”

Well I read that and immediately realized SHINE is a perfect fit for this venue. 15 minutes later, I’d submitted the film at the Economist Film Project website, which makes it a snap (allowing the submission of films posted on Vimeo, thank you very much).

If my film gets aired on PBS as a result of this ad, I may have to amend my hardline position against internet advertising. If advertising can help an indie filmmaker find an audience for a niche film, is it totally evil?

I almost never post rants. But today I’m going to make an exception. Because there’s really no excuse for seeing this when you go to to a major website: 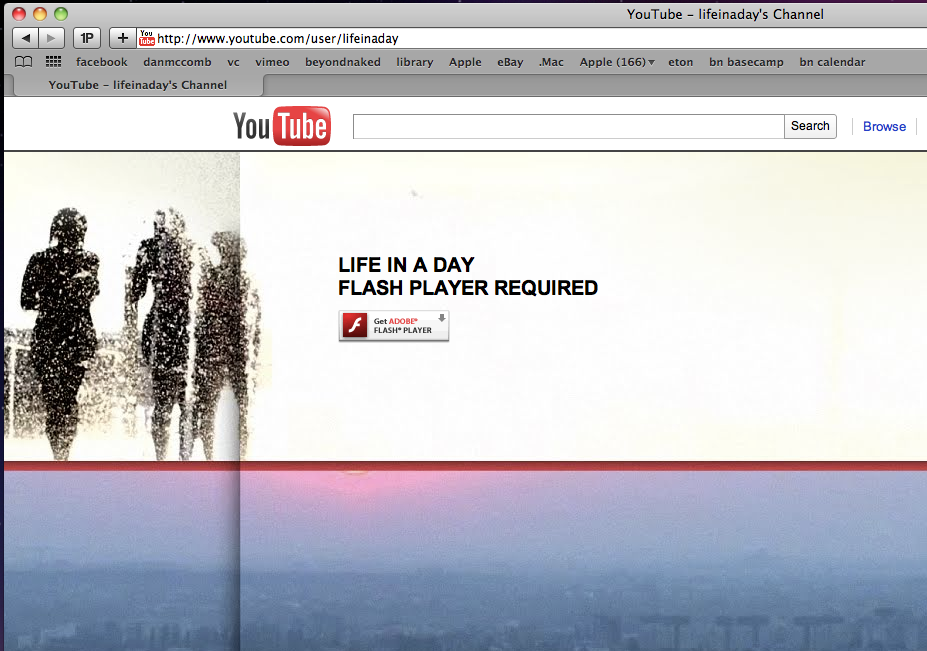 I read about the slick new Life in a Day channel that filmmakers Ridley Scott and Kevin MacDonald set up to showcase their crowdsourced documentary. I go there, and it won’t load in Safari without installing a Flash plugin. So I go through the steps to install Flash, getting highly annoyed. Then I’m redirected to Adobe’s website when the player is finished installing, instead of the site I want to visit. I go searching through my history, and find the site. I open it. And I get this. What the fuck. This is the state of the web in 2011?

OK here’s a promise: No matter how slick my films are, I guarantee they’ll never be so special that they require Flash to view them.