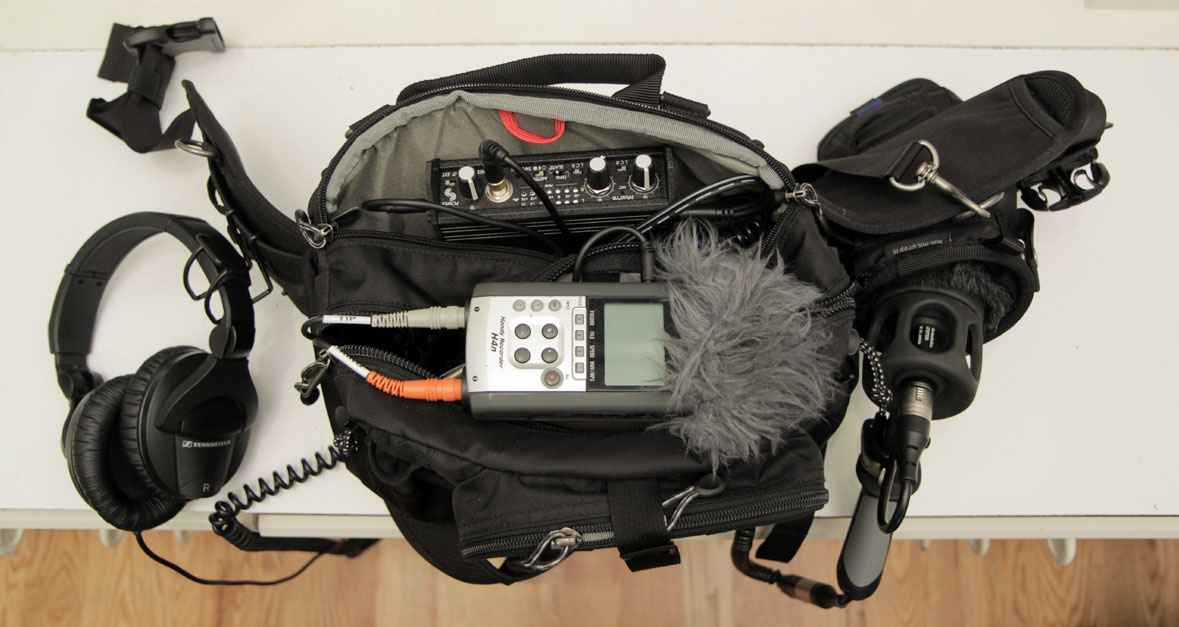 Up until now, using the Zoom H4N as a standalone recorder with good mics has worked fine for me. But I’ve evolved into a stickler for good audio, and I’m fortunate to be working with an outstanding sound recordist, Lisa Cooper. Together we are finally bumping up against the limitations of using the H4N for recording: it’s hard to read the meters on the Zoom when it’s in a sound bag (where the levels are located on the wrong side to be visible); the H4N pre-amps are somewhat noisy; the limiter sucks, and you can’t quickly send signal from left to right channels or both without digging through several layers of menus. Not to mention that when powering a 48v phantom power mic, such as my Octava MK012, the batteries drain in just a few minutes. When I read Kurt Lancaster’s rave about the MixPre in his new book, DSLR Cinema, I decided it was time to ante up.

It turns out that, even in online discussion forums, there’s scant clear information about how to correctly cable the Zoom H4N to the Sound Devices Mixpre for optimum recording (that is: recording that is as hot as possible, but that won’t clip on the recorder before it hits the limiter on the MixPre). I had to wade through at least a dozen different forum conversations before I finally found most of the advice I needed. I found the rest of it today during a trip to Guitar Center in Seattle. So I’m documenting the right steps here for anyone else who is ready to reach for pristine audio while keeping the trusty Zoom H4N in your sound bag.

So here’s the scoop. You can’t just plug normal cables from the mixpre into the zoom at default settings, because the signal coming out of the professional-grade mixpre is too hot for the consumer-grade Zoom to handle. But, with the right cable and a tiny jewler phillips head screw driver, you can make it work acceptably, and by adding an in-line attenuator that costs less than $25, you can make it work perfectly. More about that in a minute. But first, the cables.

There are two options for cabling the mixpre to the zoom: You can run either from the tape out, in which case you’ll need trs-to-dual phono jacks, or, you can buy two xlr female-to-phono cables. But there’s a problem with both: The signal that is output from each of these is different, and neither is quite right for the Zoom’s line-in.

While you COULD just run xlr female-to-xlr male from mixpre to zoom, you don’t want to do that. Doing so enables the noisy preamps on the Zoom, and you damn sure don’t want that after making that big investment in the mixpre’s vastly superior, quieter preamps. You need to use phono jacks for plugging into the Zoom to bypass the preamps. (A tip for those of you who know as little about audio circuitry as possible, like me: phono jacks are those 1/4″ jacks that look like old-school headphone jacks. They plug into the same hole on the bottom of the Zoom H4N that your XLR cables do – but into the middle instead of the three pronged connector that surrounds it.)

But wait, there’s more. If you do connect the MixPre to the Zoom as described above using the xlr-to-phono option, you will need to add 15-20 db of attenuation to get the correct level into the Zoom. To achieve this, you need to buy an inline attenuator, preferably a selectable attenuator, that lets you dial in how much attenuation to apply. And, you would need to by two of them if you want to send signal to both channels independently, which you almost certainly will want to do. So, lots of stuff to buy with this option, and it’s not cheap at $45 a pop for each attenuator. And why would you want to add all that extra weight and awkwardness to your lean, mean sound bag anyway? No, you want to use the following option instead.

The way to go is by running this 3.5mm TRS to dual 1/4″ cable from the MixPre’s tape out -> line in on Zoom. This ALMOST works out of the box when you plug it in. But there’s a big problem lurking: even when you dial down the recording level on the Zoom to 1 or lower, the audio signal will clip on the Zoom before the limiter kicks in on the MixPre. Incidentally, you don’t want to dial your recording level to .9 anything below 1, trust me – I tested it and got horrible results every time. And you also don’t want to turn down the level of the tape out on the MixPre – I tried that and it still clipped on the Zoom no matter how low I turned it down.

The quick solution is to get a jewler’s phillips head screwdriver and turn the factory setting on the MixPre’s limiter 1/4 turn to the left. By default these are set at their highest gain on the MixPre. Turning the screw to the left activates the limiter at a lower gain level.

With this configuration, I found a workable setting was to set both recoding inputs on the Zoom to 5. The tradeoff is that it’s now slightly harder to monitor recording levels on the MixPre, because the LEDs, which normally go three steps into red before clipping, now clip at the second light. So you have to ride your levels down a little further into the green and use less of your LEDs than is ideal when watching your levels while recording.

The better solution is to purchase an in-line attenuator for the 3.5mm cable, which will allow you to keep the limiter set at it’s default value, while sending a signal that is reduced by 10db to the Zoom. Then, you can up the recording level on the Zoom to compensate until it’s dialed in perfectly.

I could find only one option for a -10db TRS attenuator that will get the job done for around $25. I’m sure somebody else makes them – if you’re aware of other options, please let me know. I’d like to find something clean and simple like the Pink Noise cable made in the UK, but with less attenuation than the 25db that it has.

Incidentally, the sound bag I’m using, the Think Tank Wired Up 10 with optional mic drop in, really deserves a separate review of it’s own, which I’ll post another day. It’s killer.

UPDATE: After using the M-Audio -10db pad almost daily for a few weeks, we’ve identified a problem with this approach, and an even better solution. Check out Part II of this article for the full scoop.

50 thoughts on “Zoom H4N with Sound Devices Mixpre: how to properly connect the two for pristine audio”