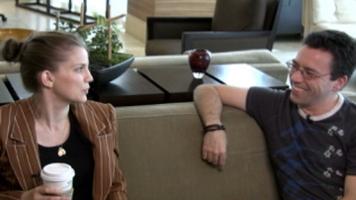 I attended this workshop a year ago, and took my interviewing skills to a whole ‘nother level. Etheredge is a real master who share skills he’s learned from more than 1,500 interviews with cultural figures from Charlie Kaufman to Chuck Palahniuk. This Art of the Interview workshop begins in Seattle on Monday, September 13th at 6pm. Here’s the details from the event page:

“Warren Etheredge is an extraordinary interviewer — one of the best in the country. He’s incredibly prepared for each encounter — and has an uncanny ability to absorb complicated material and distill it for audiences. He also has a terrific sense of humor that makes the interviews feel less like dutiful graduate seminars and more like a late-night talk show. Indeed, I think it’s only a matter of time before some media executive wises up and gives Warren his own show.” — Daniel H. Pink, author of DRIVE and A WHOLE NEW MIND

“Warren is the most knowledgeable and engaging interviewer and commentator on film that I have ever been engaged with. His insight and criticism are tempered with a keen sense of humor and irony. To be the subject of one of his filmmaking classes was both intellectually stimulating and a whole lot of fun.” — James Foley, filmmaker (GLENGARRY GLEN ROSS; AT CLOSE RANGE)

“…I found [our] conversations about 4 times more fun and thought-provoking than any other moderated talks in which I’ve participated.” — David Benioff (screenwriter, THE 25TH HOUR; THE KITE RUNNER; WOLVERINE)

“Warren Etheredge is one of the most probing and thoughtful interviewers–not to mention the wittiest!” —David Grann, author of THE LOST CITY OF Z

Tuition for this intensive workshop is $100. ($75 for graduates of TheFilmSchool’s Summer 2010 session.)

I am always flattered by the (unsolicited!) feedback I receive from the folks I interview. I am thrilled they appreciate the spirit with which I approach interviews. (Owen Schmitt , formerly of The Seattle Seahawks, refers to my style as “chill”… and who am I to argue with the 6’2”, 247 pound fullback?)

Now you can learn how I prepare for interviews and how I respond to the different challenges presented by questioning folks on tape, on camera or before an audience. And, I’ll share insights and a little bit of gossip from the 1,000+ interviews I’ve conducted with the likes of Woody Allen, Amy Sedaris, Calvin Trillin, Naomi Watts, Robert Duvall, Mariel Hemingway, Salman Rushdie, Nora Ephron,Michael Pollan, Charlie Kaufman, Augusten Burrough, Andy Samberg, Vincent Bugliosi, Nicolas Cage and others.

You’ll learn why documentarian Peter Esmonde says: “I was more relaxed being interviewed by you than anyone before or since. It’s so clear that, aside from being attentive and intelligent, you know [your stuff] — and that makes the interview more of a conversation with a compadre.”

The venue for this special intensive will be the Phinney Neighborhood Association (6352 Phinney Ave N, Seattle WA 98103)

Tuition for this exclusive, 3+ hour workshop is only $100. You may mail check or money order (made payable to Warren Etheredge) to: 1752 NW Market St #118, Seattle 98107. Or, pay using PayPal, sending money to warren@thewarrenreport.com

Space is very limited, so please reserve your seat today and indicate you’ll be attending on Facebook.

About me… As founder of The Warren Report (www.thewarrenreport.com), Warren Etheredge — America’s premier cultural conversationalist — curates and hosts over 200 events every year, a podcast and television series. The Warren Report promotes “slow culture” through commentary, outreach, events and education. He is the host of The High Bar, a television series that airs weekly on SCANtv. Warren has conducted over 1,500 interviews — in print, on camera, on stage — with a wide range of filmmakers, personalities and smarties including Amy Sedaris, Darren Aronofsky, Michael Pollan, Charlie Kaufman, Naomi Watts, Salman Rushdie, Robert Duvall, Alexander Payne, Nora Ephron, Augusten Burroughs and Chuck Palahniuk. Additionally, Warren is one of the founding faculty of TheFilmSchool, along with Tom Skerritt, Stewart Stern, Rick Stevenson and John Jacobsen. For six years, Warren served as the Curator for the 1 Reel Film Festival (at Bumbershoot), before that, he worked with the Seattle International Film Festival. Warren has staged over 40 plays in New York, published five books, written countless magazine articles and recently completed a feature-length documentary, HUMOR ME. He is the host of Words & Wine, The Good Life and the Biznik Innovators Series, conversation series with A-list authors, and is a regular contributor to Seattle’s premiere public radio station, KUOW. He speaks at festivals and conferences nationwide including The Screenwriting Expo, The NAMAC Conference, The International Food Bloggers Conference, The Austin Film Festival and Conference and Bastyr University’s Founders Weekend.