Earlier this week there was an excellent post from one of the clever guys at dslrhd.com, explaining a technique that can be used to disable automatic gain control (AGC) on a Canon 7d or T2i:

Only problem is, I followed the steps, and it didn’t work for me and my t2i. So I started tinkering. After a bunch of trips to Radio Shack, I figured out how to make it work, and if you got what I got, it’ll work for you too. 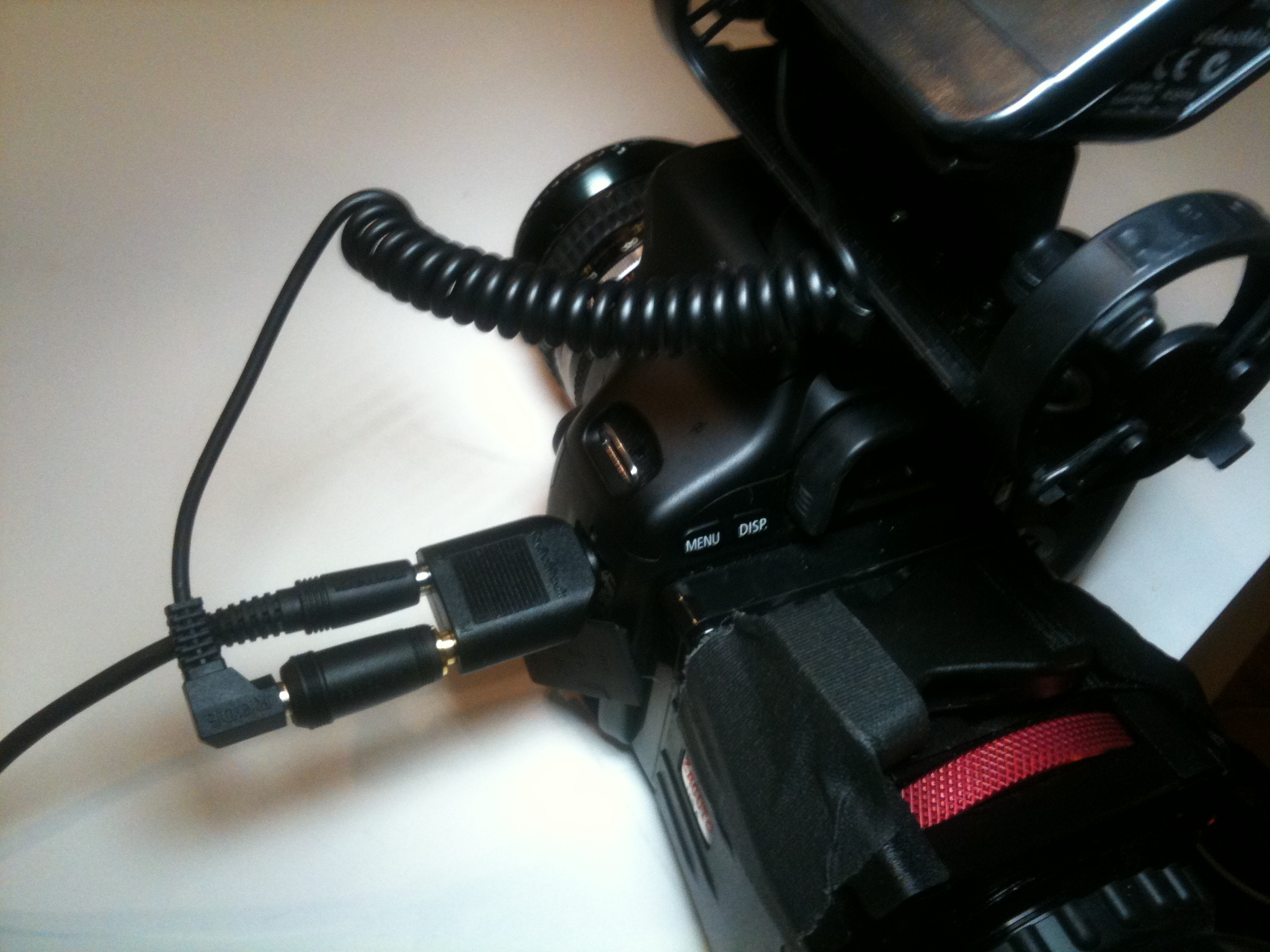 So, here’s what I got: a Rode VideoMic and a T2i. I’ve found the VideoMic to be almost useless, because of Canon’s AGC. In fact, the tiny built-in mic on the camera sounds better than the VideoMic, which is ridiculous. Anyway, when I hooked up the VideoMic to the splitter as outlined in the above tip, I got nothing but a lot of static and hiss on the line.

It turns out the problem is because the VideoMic outputs a stereo signal (which doesn’t make very much sense, because it’s a mono mic, but it does). Plugging a stereo jack into a mono jack doesn’t cut it. You need a 1/8″ stereo plug to 1/8″ mono jack adapter (part number 274-882 at Radio Shack). Plug the VideoMic into that, then plug that into the Y described in the video. Bingo, you’ve got audio. Note: for playing the tone from your iPod, you’ll need either a mono 1/8th cable OR another one of the aforementioned stereo to mono adapters plus stereo cable. In the picture above, I’m using a mono cable to connect to the iphone, but these only come in 6′ length at Radio Shack, so I’m going to switch to using a 12″ stereo cable with an adapter to make it more manageable. 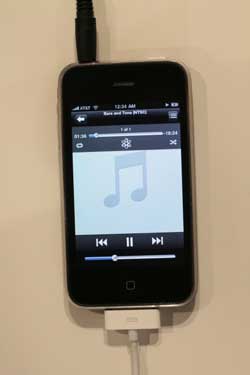 The volume slider on my iPhone is what you use to control the sensitivity of your mic (that is, the amount of reduction of the AGC). I find that setting it at 1/3 volume works best for recording someone speaking at a distance of 3-5 feet directly in front of the camera. Sliding the volume up increases the tone and thus reduces the gain, and vice versa. Pretty slick. Using this setup, my Rode VideoMic is finally useful to me.

Gotcha alert: This splitter is just slightly too big to fit in the T2i’s mic jack socket, and as a result, tends to work itself slightly disconnected with normal handling during a shoot. And, since you can’t monitor the sound going into the camera, there’s no way to tell for sure whether it’s come lose, except to physically grab the thing and push it in every so often during shooting. It’s always something with these DSLRs, hey? But in a year or two, when all of these problems are solved in a $2,000 ergonomically-correct, fat-sensor proper video camera body, I got a feeling we’ll remember these days fondly.

To generate the tone: Fire up Final Cut Pro and an empty timeline. Use the Generator > Bars and Tone to generate 20 minutes of something like NTSC bars and tone. Export it. Open it in Quicktime 7. Export again, only this time uncheck video, and choose to save the audio only as an AIF file. Drop that into iTunes. Create a playlist called “film utilities.” Drop it in there, and you’re all set.

33 thoughts on “How to really disable agc on Canon t2i”