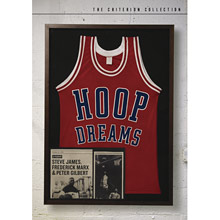 I’ve never seen Hoop Dreams before. Surprised? Me too. It comes up frequently in conversation with other documentary filmmakers. And despite being famously snubbed by the Oscar committee, it is “the most successful and critically acclaimed documentary in American history,” Roger Ebert wrote in 1995 (obviously prior to Michael Moore’s blockbusters). I finally sat down to screen the nearly 3-hour film for myself last night.

Synopsis: The story of two black kids from low-income neighborhoods in Chicago, who dream of one day playing in the NBA. The film follows their separate paths  through high school, chronicling their personal and professional challenges that include low grades, money problems, unexpected fatherhood, crime and drugs in addition to the main conflict, which happens on the court in a series of high-school playoff games culminating in state championship game.

Story Structure: The film begins a few moments before the film’s climax: in the final moments of a high-school state championship game. This let’s the audience know that something big is going to happen in the film – someone is going to make it to the playoffs. At this early stage there’s a great line from one of the characters: “When I get in the NBA…” This tells us he WANTS something, and provides the classic ingredient of a character-driven plot. It starts the story train in motion. And we’re willing to stay in our seats to see what happens.

We then flash back to pre-high school, where the story really begins. We meet Arthur Agee, who gets recruited by the same suburban high school that Isaiah Thomas played on before going pro. The film switches back and forth between the two main characters, using a mix of cinema verite and interview-driven storytelling. There’s also a limited amount of narration, provided by director Steve James, to guide us through key points in the story.

The story is helped by one incredibly powerful element: conflict. It is always palpable, arising from the gap between the reality the boys come from and the success they aim to achieve. Everyone plays a part in blocking them: their coach makes their life hell, and fails to see the talent in one of them. Injuries threaten to detail the other. Tuition costs force one of the boys to drop out of school briefly. One of the boys fathers leaves the family. One of them gets mugged. Friends become drug dealers. And of course, the opposing team is out to beat them every time. Perhaps the biggest conflict, though, comes from inside – with both boys struggling to barely maintain their grade point average at a level that will give them a shot at going to college.

Overall, this story follows a classic hollywood storyline: act one sets up the heros for their journey with a series of tests that show us they are up to the challenge. Act two shows them either overcoming or failing to overcome a series of increasingly difficult tests, which sets one of them up for the final  showdown in act three. After the climactic final game, the film wraps up quickly. We learn what happened to the two major characters in college in epilogue text prior to the credit roll.

Cinematography: I spent the better part of yesterday shooting 4th-7th grade kids shooting hoops at Eton School, for whom I making a series of short promotional web videos. So I can say with authority that it’s HARD to shoot basketball handheld in a way that isn’t blurry, shaky or out of focus (for me anyway). I was consistently impressed with the fact that Hoop Dreams made it look simple and easy (even in clutch situations during playoff games where they had only once shot at getting it right). They are helped by shooting wide, with what appears to be shoulder-carried cameras. Other cinematic standouts: tracking shots shot from car windows show the neighborhood, and the kids walking to school (with camera traveling a little faster than the person walking – as if they are falling behind perhaps). A pan down from the sky to the outdoor basketball court is how we first get into the narrative, from the early set up of playoff game. Nice tough! Remember to get shots like that – you’ll love yourself in the editing room.

I liked how the interviews were a mix of set up interviews, and off-the-cuff interviews, for example, Agee’s mom talking on her bed with arms under her staring at ceiling. Nice mix helps weave it all together into one storytelling experience. Also, I loved how they included the live camera shots of the orthoscopic surgery – that was very dramatic and made me wince. Also, there are two places in the film where big games are introduced with a shot from up high in the stands with the camera moving through a narrow doorway into the arena. This is a visual metaphor for getting through a “tight spot” and adds great dramatic effect to introduction of game, even though these are very brief shots.

Editing: This film was cut from 250 hours of footage, shot over a 5 year period. That’s a LOT of editing. In addition to just plain brilliant work in finding the thread of story in all of that film, there are a lot of techniques that I observed in this film. For example, one convention that we return to throughout the film is a stock evening shot of the outside window of Agee’s home, against dark blue evening sky. Night is falling. Darkness is gathering. And the editor is both setting the stage for some drama to unfold and telling us where the action actually happened at. A nice extra is that the editor could begin the sound of the family talking before we cut to them, which pulls us into the conversation at same time as informing us where it was taking place without having to use narrator to do so.

I also really liked the cuts that move us seamlessly from practice games into real games. This establishes the rationale for the practice – it really does pay to practice hard – or, in some cases, it doesn’t pay because you didn’t practice hard enough. Narration is subtle, with just enough to tell the story. I like it. Finally, I like the frequent mixing of closeup, medium and wide shots used throughout the film.

Music and Audio: There’s frequent use of music in the film to introduce dramatic moments and cue us that something important is going down. A lot of the dramatic effect background music is repetitive, interestingly. But there are a lot of great cuts in there too by performers like Snoop Dog. Audio is recorded well enough that I can’t remember much about it, which is exactly what well-recorded and -mixed audio should do.

This film, more than any other I’ve screened to date, incorporates most of the storytelling devices available to documentary filmmakers: narration, cinema verite, interview, still photos, news casts, newspaper headlines. Without feeling chaotic or unstructured. Together it all adds up to something greater than the sum of its parts. No wonder everyone’s still talking about this film 16 years later.