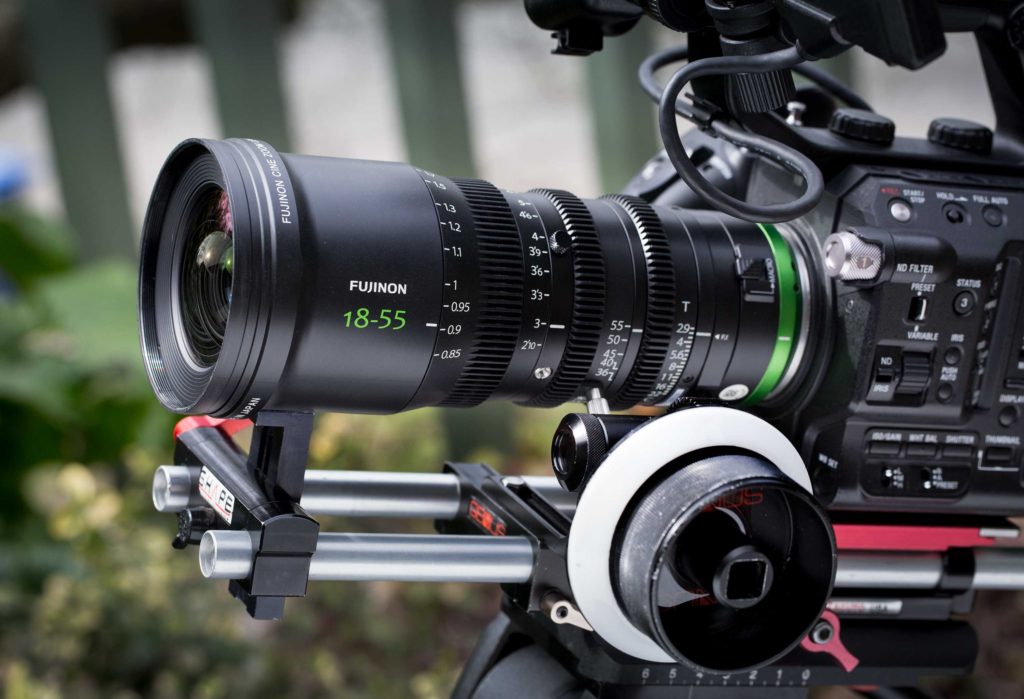 The Fujinon MK 18-55 is the first legit cinema lens that this documentary shooter has a prayer of owning. But $3,700 is still a lot of money. Is it worth it? To find out, I was among the very first people to rent one. 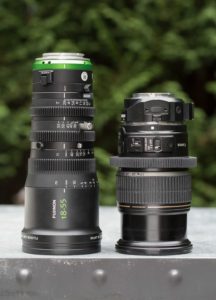 First off, it’s much more compact and lightweight than the photos I’ve seen imply. By way of comparison, my go-to lens on the Sony FS5 has until now been the EF-S 17-55mm f/2.8 IS USM Lens with T Smart Adapter Mark IV. Check out the photo on the right: this extraordinary lens from Fujinon is about the same weight, and only slightly longer.

The Fujinon MK 18-55 is also sharper than my Canon 17-55. But not dramatically sharper – I had to blow the image up 200 percent to perceive the difference. See below.

What about barrel distortion? The difference is slight, but the Canon EFS 17-55, which has plenty of barrel distortion on the wide end, fares better than the Fujinon MK 18-55. I do wish that the MK didn’t bend vertical lines (i.e., walls) the way it does shooting on the 18mm end.  And there’s really no way to correct that in post, like you can automatically do when shooting with the Canon on a C100 with lens profile correction enabled, for example.

Compared to Canon EFS 17-55, this lens is warmer, sharper, and a little wider. See for yourself: 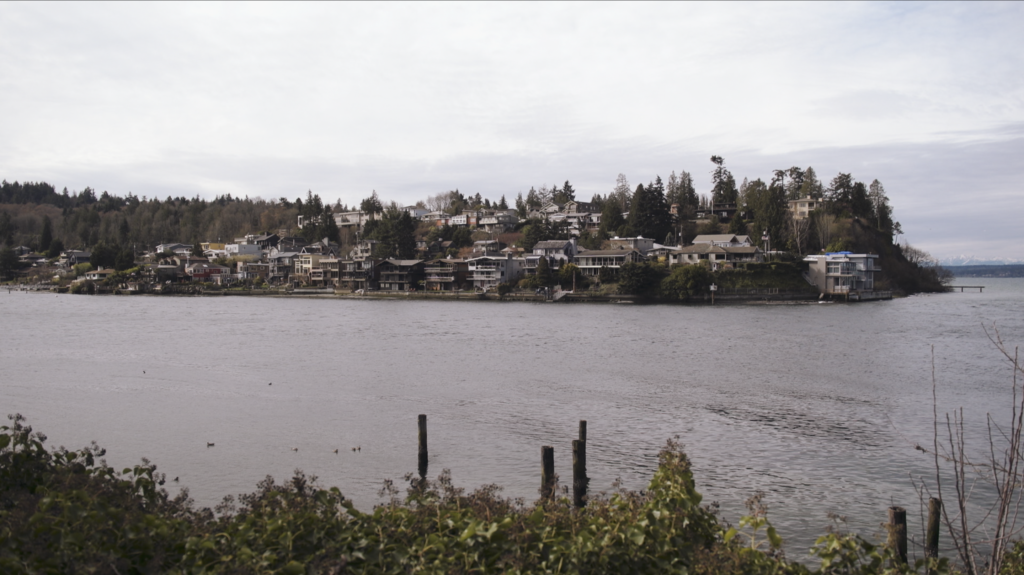 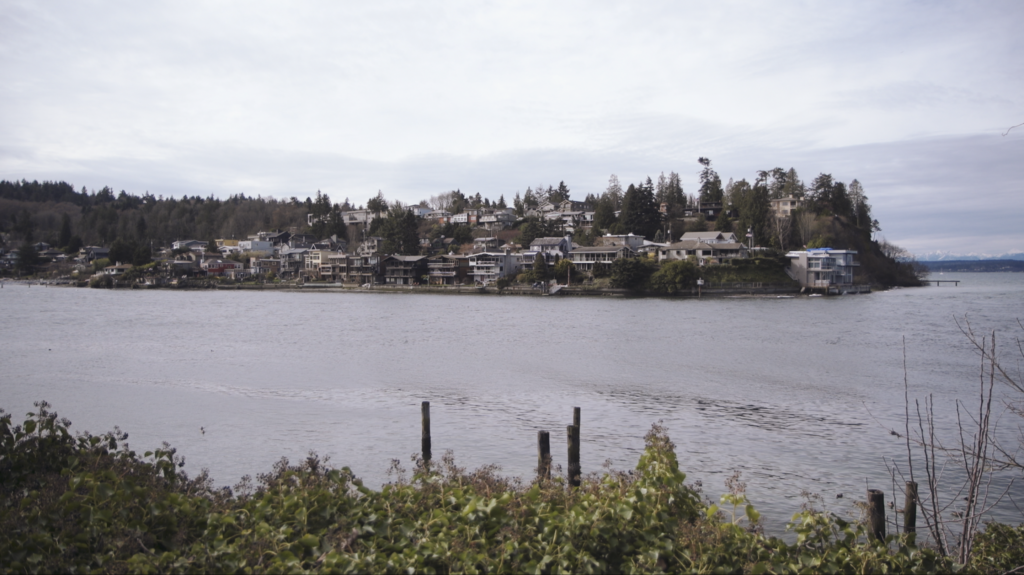 In the frame above, the Fujinon 18-55 reveals itself to be significantly warmer glass than the Canon.

To see the difference in sharpness, you need to zoom in to 200 percent: 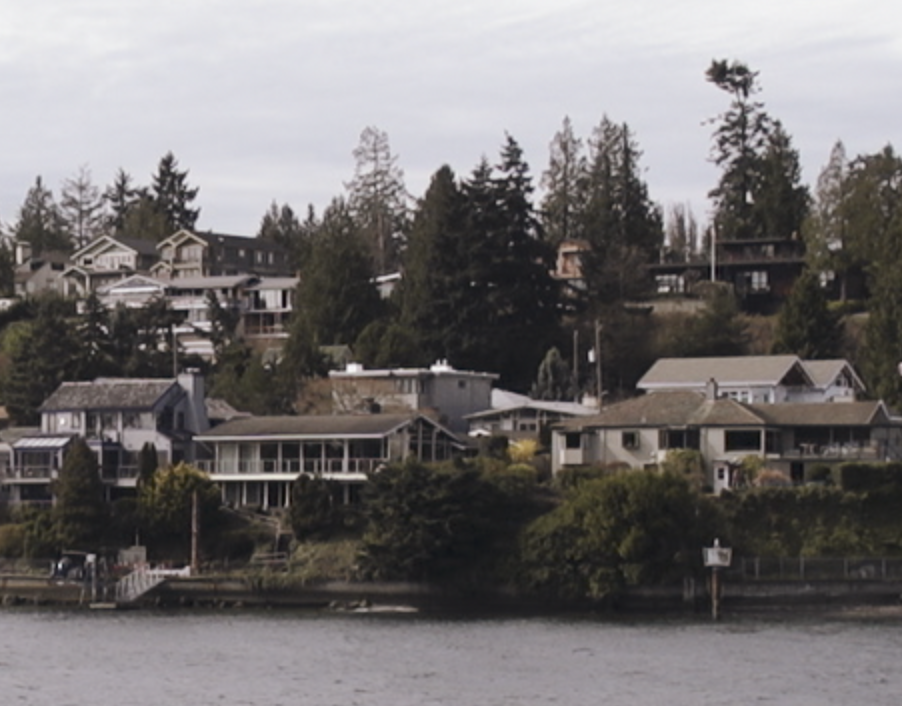 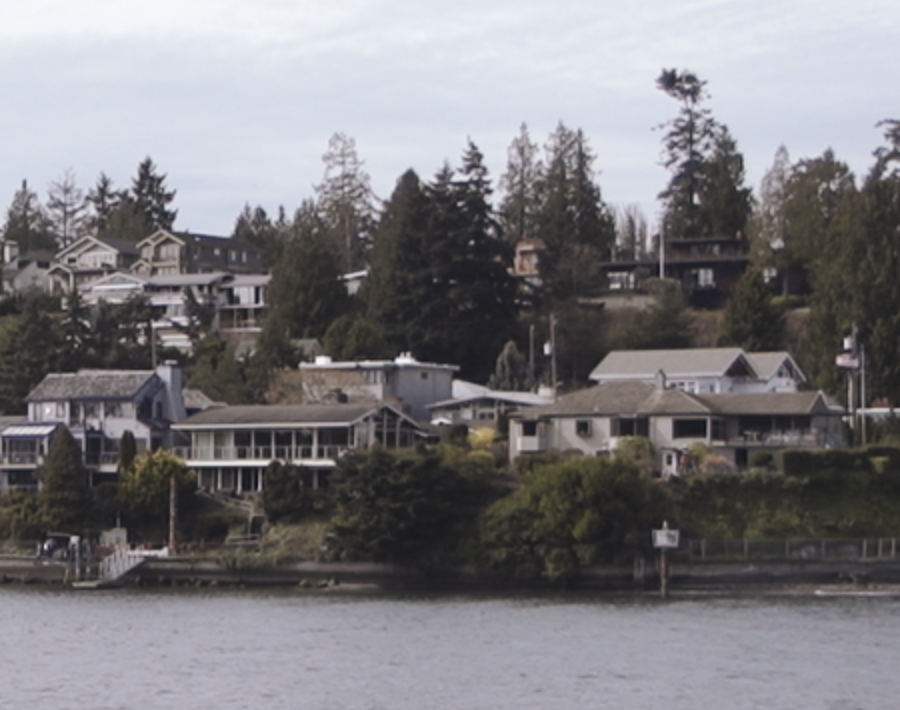 This lens makes me want to pull focus all day. I was really impressed by how easy it is to get extremely precise pulls. The heft of the rotating elements, all three of which are geared, is just right for hitting repeatable, consistent marks. It would be a joy to use this lens with a wireless focus puller.

As a rule, I don’t use zooming as shooting technique. But after rocking this lens, I’m beginning to wonder: why not? With the Fujinon MK 18-55, it’s hard not to feel like I’ve just added a new word to your vocabulary.  “Parfocal.” Mmmmmm. Sexy.

While it is still quicker to digitally punch in to check focus, with this lens it’s possible to crash zoom in, grab focus, and back out to your shot. Where that’s truly useful for a documentary shooter is when you’re rolling on something, and want to cut in-camera. Instead of having to refocus every time you zoom in or out, now you just keep rolling and watch your keeper count go up, up, up.

This is the first lens I’ve ever used that doesn’t show any noticeable breathing. Know what I’m talking about? Narrative-style focus pulls, coming soon to a documentary screen near you. To see how lovely this is, here’s a short clip comparing the Fujinon MK 18-55 to the heavy breathing Canon EFS 17-55:

BUT: There’s NO IS

As you probably noticed in that clip above, you have to be really careful when pulling focus not to jar the camera. With no IS, any shaking or vibration translates directly into your shot. Small amounts of this can be removed in post, but for many situations, such as shooting handheld, there’s no substitute for IS. For example, I was working on a doc a couple weeks ago where I found myself shooting on a bridge, with lots of car vibration. For those situations, this will not be your lens. Let me repeat that. If you want to handhold this lens, forget about it. If you’re going from shooting an IS lens to this, you are going to notice your footage has one hell of a case of the jitters.

But for precision situations where you’re going on sicks, or any other controlled motion situation, you will most definitely want this to be your lens.

You have to pay attention to the focus gears when pairing this lens with a focus puller. The Fujinon MK 18-55 appears on first glance to have a very wide gear width in which to seat the focus puller, but actually, it isn’t that wide – the geared area slopes down toward the front, causing your gears to not mesh correctly if mounted too far forward. Be sure to place your gears behind the red line: 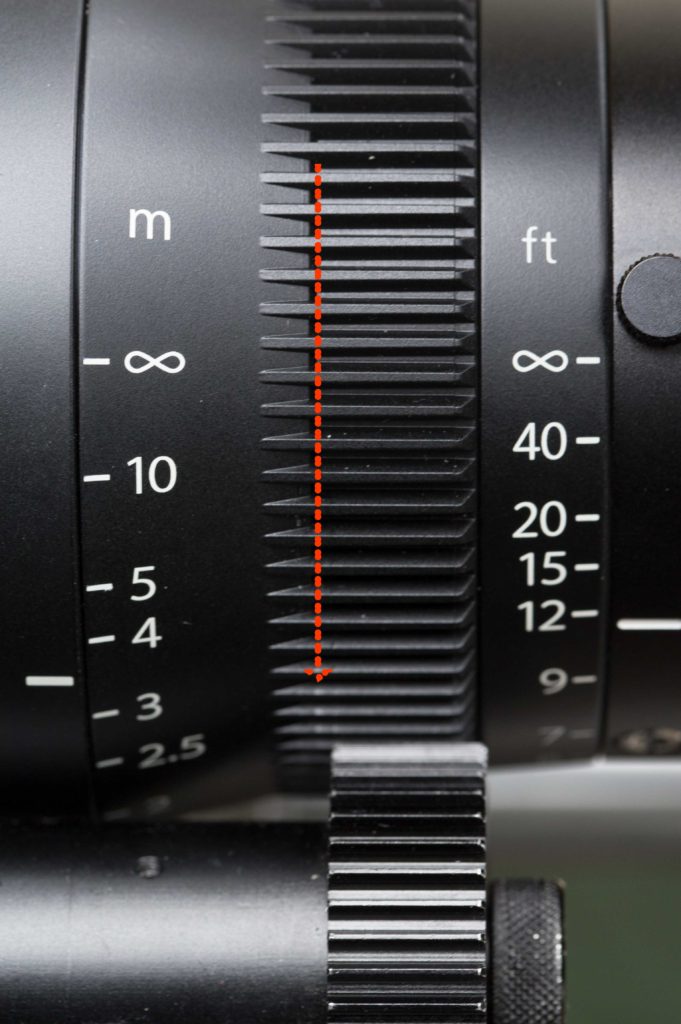 This lens is long enough that you really should use a lens support. It’s not absolutely essential, but for vibration-free focus pulls, I found I needed it. 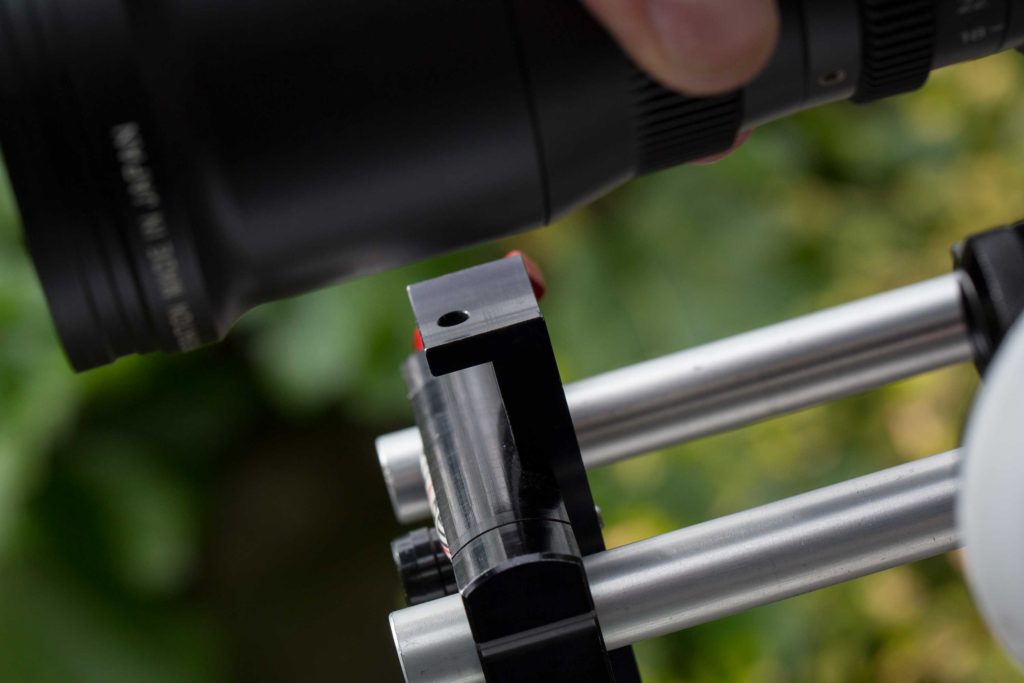 I tested the lens with two supports, Zacuto 1/4 20″ Lens Support and Shape Lens Support. The winner, hands down, for documentary shooting was the Shape support. Not only is it far more affordable than the Zacuto, but it also allows faster lens changes.

The Shape lens support simply cradles the lens perfectly. The Zacuto requires screwing in a locking support rod, and that will slow down your lens changes. Speaking of that, this lens will really come into its own when it’s sister, the MK 50-135, is released this summer. That will give you a range that will cover most documentary situations with just two lenses. So you’ll be able to spend more time shooting and less time swapping glass. 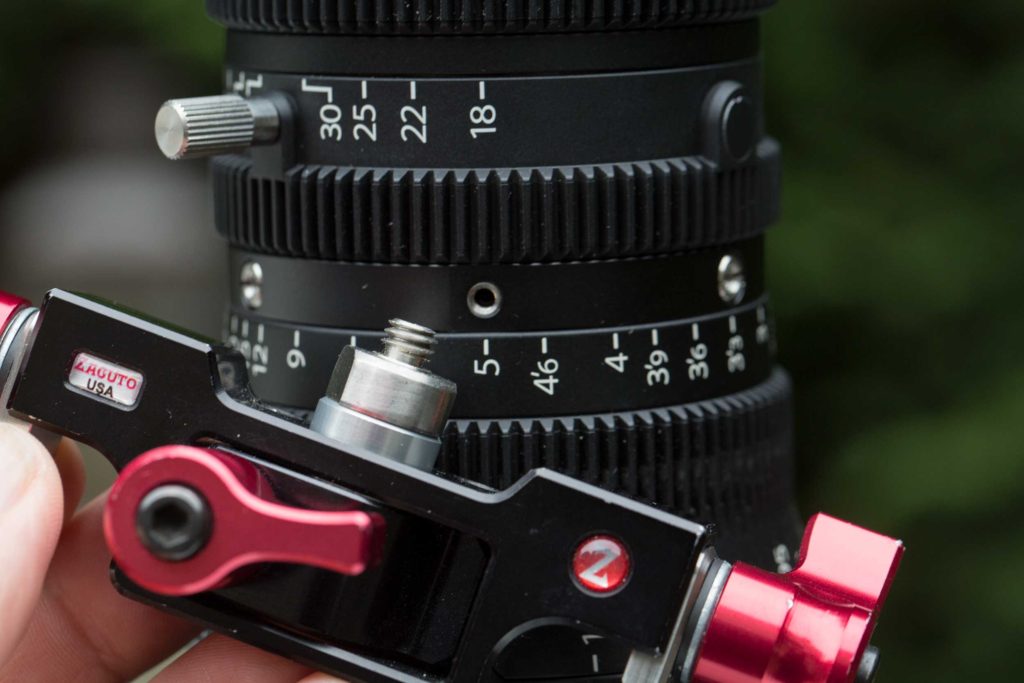 The Fujinon MK 18-55 does not have a 1/4 20″ mounting point, so if you want to attach a support you’ll have to use the adapters that ship with the lens (but not with the rental).

Lensrentals.com did not include the adapter in their package, so be sure to specify that you want the adapter if you plan on supporting this lens with a screw-in support.

How easy is it to swap the lens in and out with a matte box? I tried it out with my Genus Production Matte Box, and I was delighted to discover that the GPMB default lens fitting pairs perfectly with the Fujinon HK 18-88. The box simply sides over the front element of the lens, and screws tight to mate. Like so: 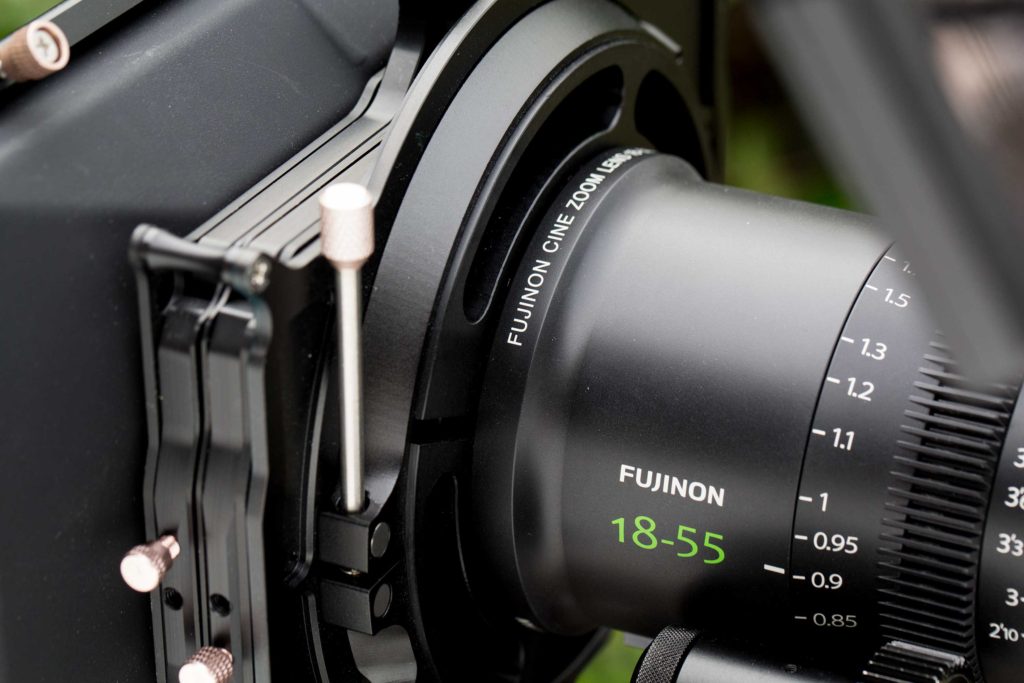 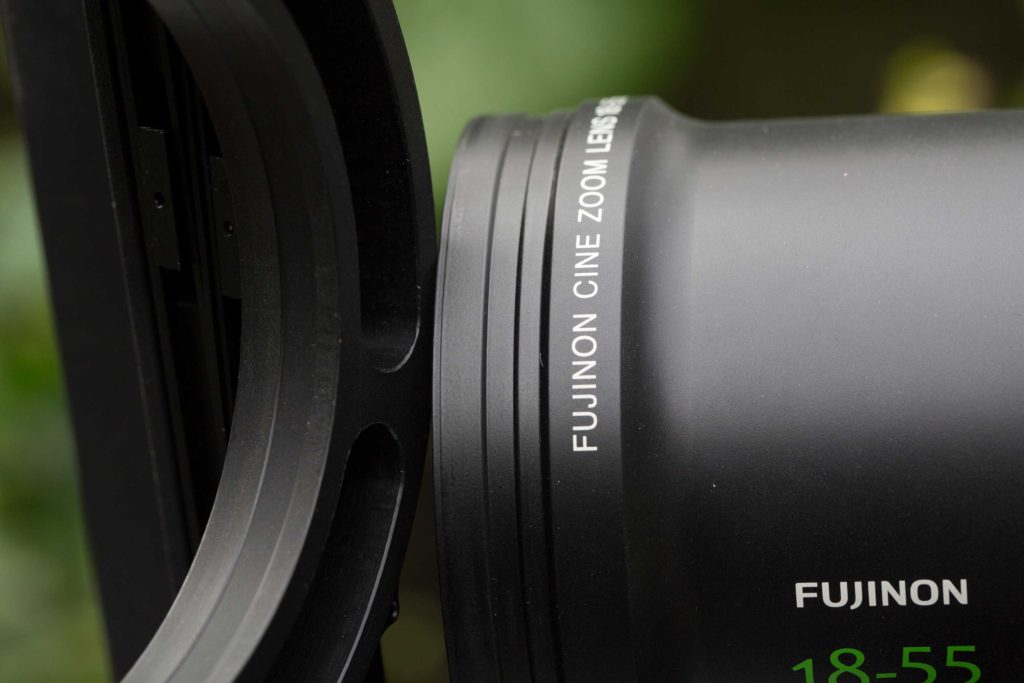 The Genus Production Mattebox’s default 85mm clamp is perfect to mount it securely to the lens.

I found the best way to use the Production Matte Box was to remove the rail block mount altogether, and simply clamp the matte box to the lens. It’s overall lighter that way, and the Fujinon MK 18-55 lens is designed to accommodate the weight of a matte box without damaging the lens in any way. Contrast that will many still lenses, like my Zeiss CZ 50mm f/1.7, which fell apart under the weight of my Genus Matte Box Lite, forcing me to use them only with rail-mounted boxes.

How to adjust the backfocus

The focus can change depending on the temperature and humidity with this precision lens, so it’s important to set back focus on the Fujinon MK 18-55 correctly before a big shoot. Here’s how it’s done.

First, grab a tape measure and focus chart, if you have one. Otherwise just focus on something with fine detail.

Another neat trick this lens does is maintain the same light level throughout the entire zoom range. When I zoom from wide to tight on my Canon EFS 17-55, it gets noticeably darker on the long end. But not the Fujinon – it’s precisely the same brightness at both ends of the zoom.

“Demanding.” That’s a word I’d use to describe this lens. It’s not forgiving like IS glass. But once you go there…

“Tesla.” That’s another word that wasn’t in my vocabulary until a few years ago. I don’t own one (yet). But I imagine owning this lens could make me feel a lot like someone who does.

4 thoughts on “Fujinon MK 18-55: the Tesla of documentary filmmaking?”