The more I use the Zoom H4N, the more I love it and discover new uses for it. My latest find: it can work as an audio interface. I’ve been doing a lot of voiceover work lately, and was on the verge of purchasing a USB audio interface such as the Fastrack so that I could use a quality mic like my Octava MK0-12, to record directly into Soundtrack Pro. The Zoom H4N is supposed to work as a USB audio interface – but it doesn’t. I did a ton of testing, and all the voiceovers I recorded via the USB connection to the Zoom were distorted – not only tonally, but they had weird random snapping and crackling and occasional skipped sections of sound. Very bad. But there’s a workaround…

As I was on the verge of placing an order for the Fastrack, it occurred to me: why not simply use a 3.5mm male-to-male cable (which I already own) and connect the Zoom from its line out to the Mac using the Mac’s 3.5mm input jack? I tried it out, and it works great! That’s about $120 saved, and one less piece of equipment to clutter up my editing table. 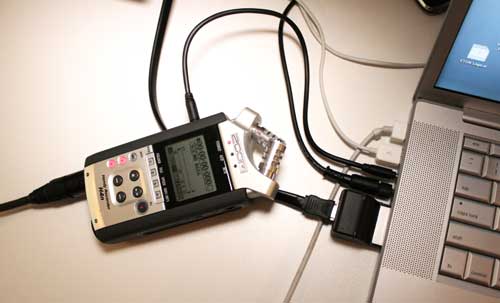 Configured like this, the Zoom does not have to itself be recording for this to work – I simply press the record button once (not twice, which would cause it to record onto the sd card), which puts it in standby mode, passing the signal through the line out and into the Mac, which handles the actual recording in Soundtrack.

It’s best to leave the monitor set to None, or else you’re likely to have feedback issues while recording.

Finally, arm the track you want to record to, press the record button and away you go.