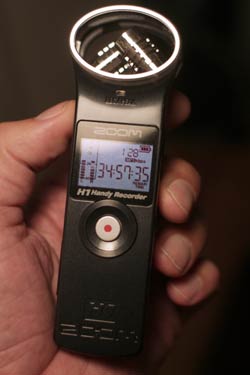 My $99 Zoom H1 arrived yesterday, and as expected based on early reports, it IS flimsy. But nevermind – the tiny size and killer price makes it possible to overlook that. The more immediate concern is: how does it sound?

I did a simple side-by-side comparison of male dialog (my voice reading the first paragraph of Origin of Species) recorded in my office, in three configurations: a Tram TR50 lav (run through a Sennheiser G3 wireless transmitter), built-in stereo mics, and Rode VideoMic. I didn’t do any post processing on the files except to reduce gain slightly on a couple files so they roughly were the same level for the comparison. Here’s how it sounds (WAV files recorded at 48khz 24bit):

NOTE: I just discovered that the wordpress plugin I installed yesterday to steam these only serves the WAV version of the file if you have an HTML 5 compliant browser. Otherwise, it serves up an mp3 (no good for comparing audio.) So to be safe, I’ve posted direct links to the WAV files in the comments. 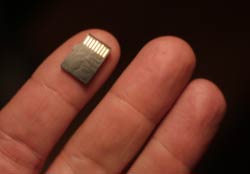 Conclusion: The Zoom H1 records solid dialog. But if you were hoping for the same H4N quality in a smaller package, you will be slightly disappointed. To my ear, the H1 delivers dialog that is flatter and less rich, especially in the higher frequencies, than the H4N. It’s not such a radical quality drop that it’s a dealbreaker, though. Far from it. Until now, all we’ve had in this size and price range has been crappy mp3 recorders that cost the same or more and sound like shit. The H1 can record dialog that’s quite usable, from a tool that’s affordable, and ridiculously small. I call that a winning combination.

I plan to use the H1 two ways: mounted on my dslr for recording dual sound, and as an inexpensive alternative to purchasing another expensive wireless lav. For the latter combo, it’s small enough that I can hide the recorder on the subject along with a wired (instead of wireless) lav. One drawback to this: no ability to monitor while recording, since the recorder is on the subject. And, I haven’t been able to find a self-powered Tram TR50 lav that has a 3.5mm jack UPDATE: I’m using this adapter to make it work. 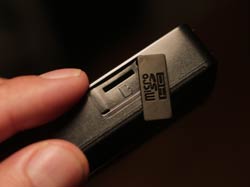