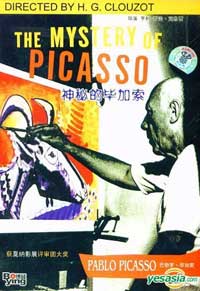 Where does art come from? It’s a mystery, for sure. But one that can be recorded on film. French director Henri-Georges Clouzot captures Picasso’s process with what at the time may have been innovative techniques of time lapse, but that today seem a tad simplistic. But if you’re a Picasso fan, it’s enchanting.

Synopsis: Using a process that involves colors bleeding through paper to reveal pen strokes as they happen, the filmmakers join Picasso in his studio to observe how he puts ink and paint on canvas.

Story and Structure: The film is simply a visit to Picasso’s studio, in which he performs a series of paintings specifically for the camera, from beginning to end. A handful of brief interludes in which the director converses with Picasso add much-needed breaks from the tedium of watching paintings slowly emerge. It concludes with Picasso signing his name on a big canvas, and walking away.

Cinematography: The technique of ink bleeding through paper is interesting and a mystery for the first part of the film until it’s revealed when the director of the film inserts himself and his crew into the production in a conversation with Picasso. There’s a scene in the film, apparently inserted to add dramatic effect, in which the camera is about to run out of film, and we see the feet running out. But it seems fairly contrived. Lots of time lapse, which is kind of tired by the end.

Editing: The edit emphasizes the art, to the exclusion of Picasso himself.

Music: The music is frenetic, and all over the place. I’d have rather heard Picasso musing about his work in voiceover, instead of all that music and very little spoken words in the film. But the music does match the painting pretty well perfectly, complete with flourishes at end. A little too perfectly.

The director in this film seems a little high on himself. He dominates the conversation with Picasso, and smokes a pipe in Picasso’s studio. I was a little embarrassed for him.