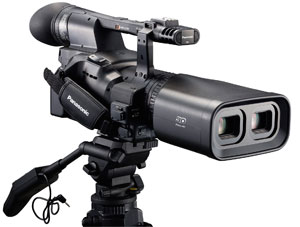 I’m intrigued by how the rapid pace of technological change is affecting documentary filmmaking. One safe prediction: we’re going to see more 3d documentary filmmaking in the near future. The overwhelming success of 3d Avatar shows what can happen when you dazzle audiences with the pure visual magic that 3d can provide.

Now, thanks to a new 3D video camera from Panasonic, it looks like 3d filmmaking could become an option for documentary filmmakers. The specs on this camera are pretty impressive, right down to the fact that they record onto standard SDHC cards, which I’m a huge fan of (I HATE how most every major camera manufacturer has it’s own proprietary solid-state card type, and applaud the move that Panasonic seems to be making to support the inexpensive SDHC standard).

This camera is estimated to begin shipping this fall at a price of approximately $21,000. The price will put this camera outside the range of most documentary shooters, but within the reach of someone dedicated to pushing the boundaries of what technology makes possible. Projects that involve extraordinary visuals – imagine Winged Migration if it had been shot in 3d – would be a natural fit. But I’m intrigued by something else: what emotional impact would an interview shot Errol Morris-style looking straight into the lens(es), look like in 3d? Could be pretty powerful stuff.