I’m selling my mint-condition JVC camcorder. It’s tough to part with this great little camera, which I bought less than two years ago. I shot one documentary with this camera, a film that got me into Werner Herzog’s Rogue Film School last June. But my workflow has evolved so it’s time to find a good home for this great camera, which is today selling new on B&H Photo for $2,795.

So here’s why buying it from me is a killer deal: I’m including a whole bunch of extras like batteries, filters, pack and wetsuit, stuff you’d need to buy anyway. When you total up the price of everything I purchased to go with this camera new, it comes to $3511.57.

I’m pricing everything for $2,300.00, firm (please don’t ask me to sell items individually – it’s a package deal). I’ll update this listing with “SOLD” when it’s been sold – email me at dan at danmccomb dot com if you’re interested. Here’s some photos: 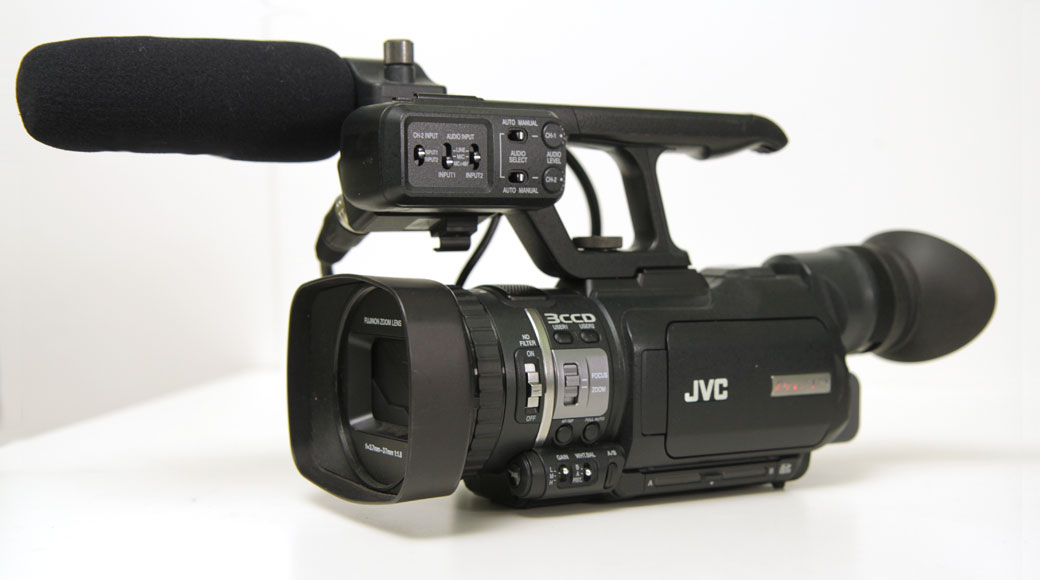 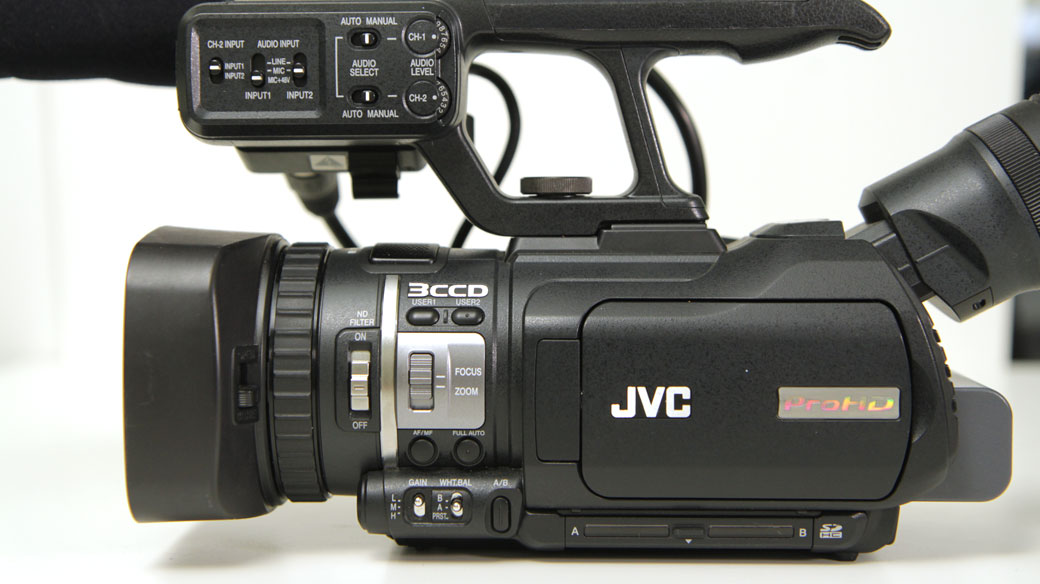 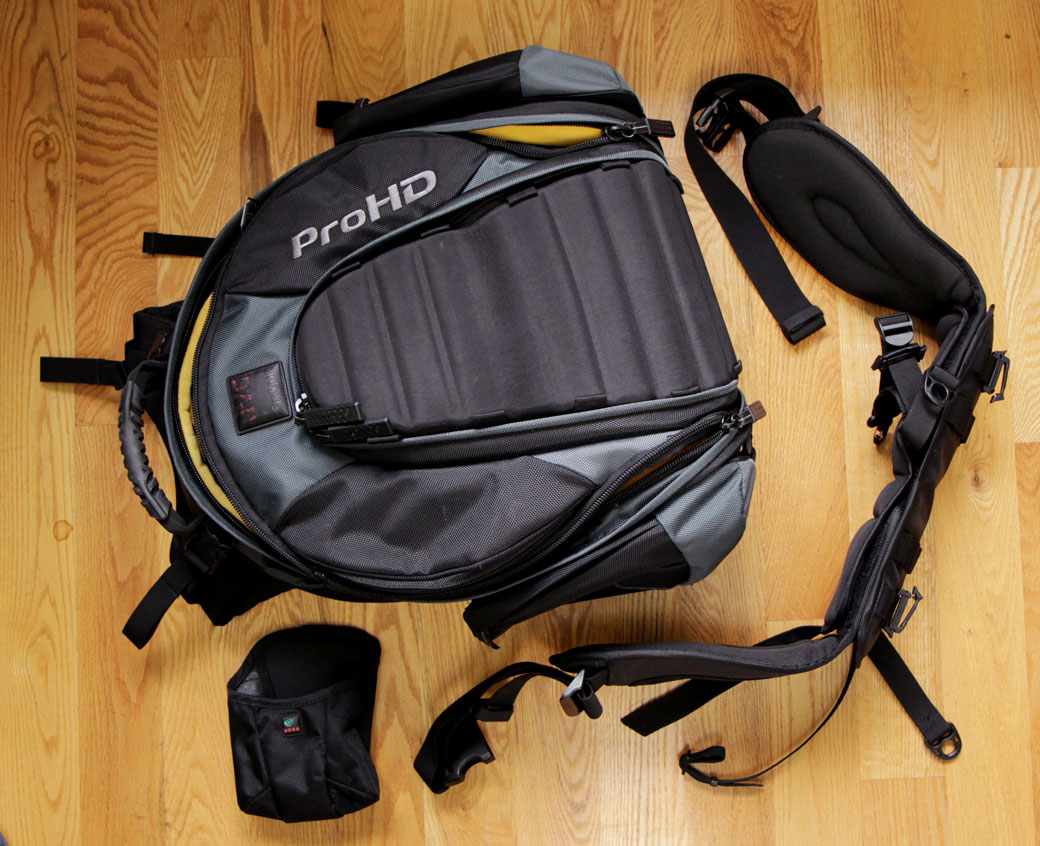 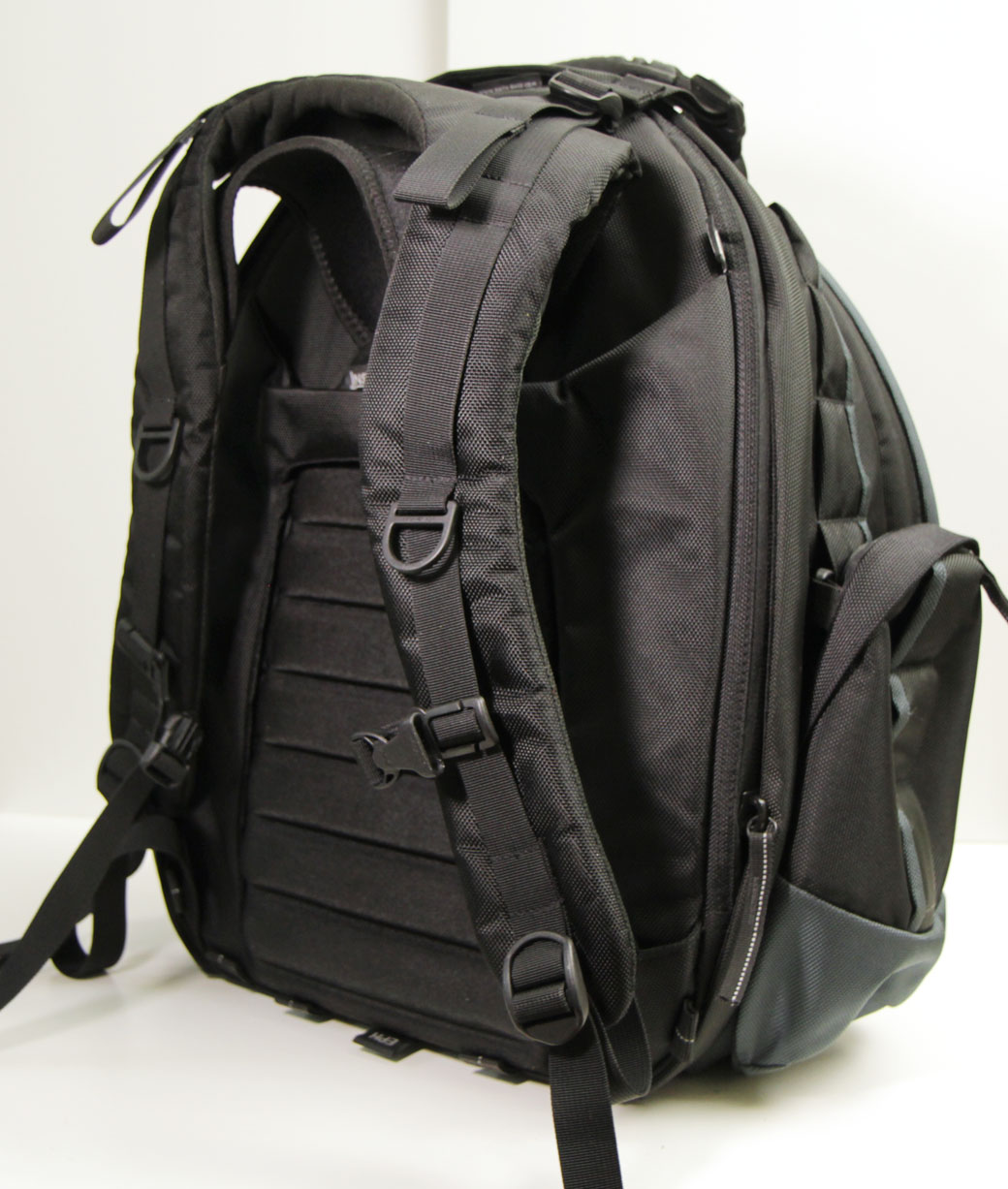 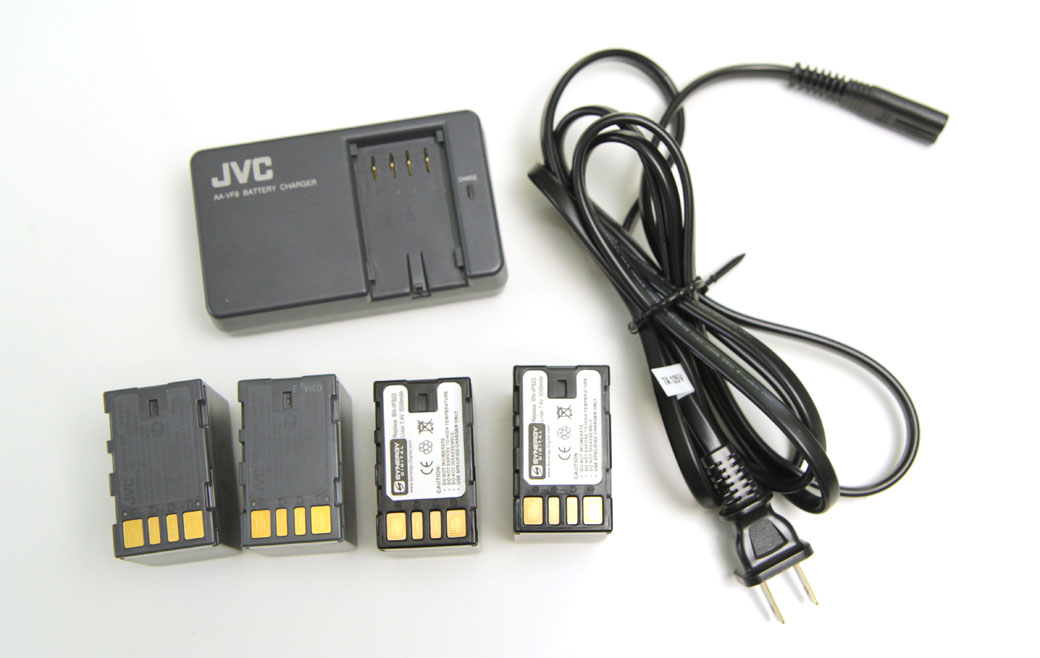 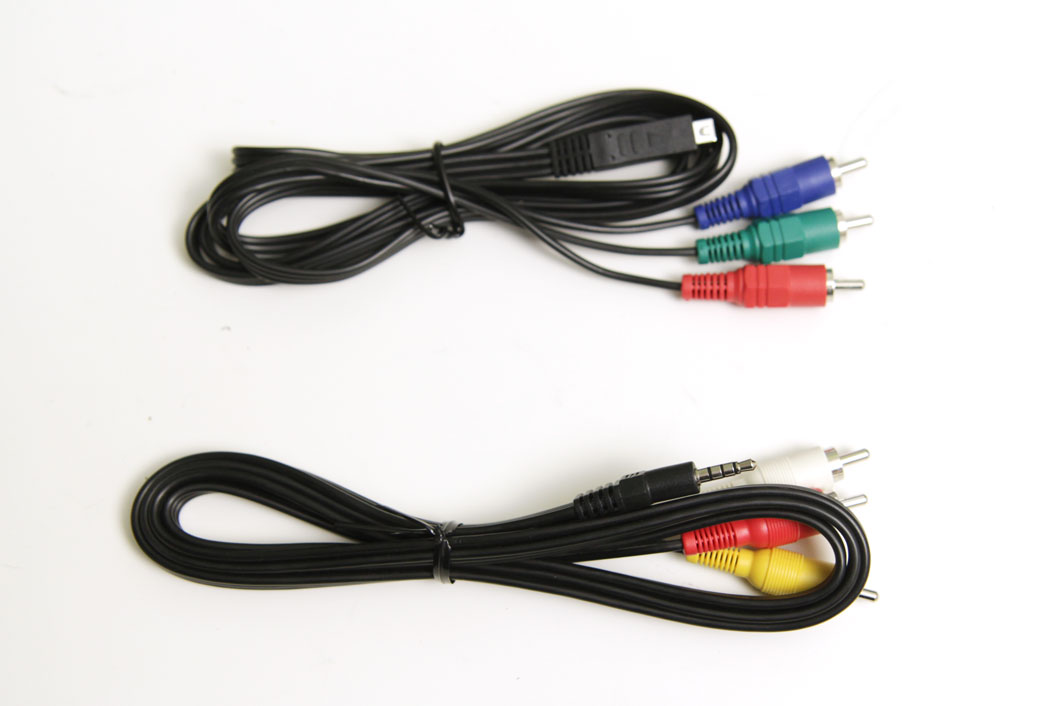 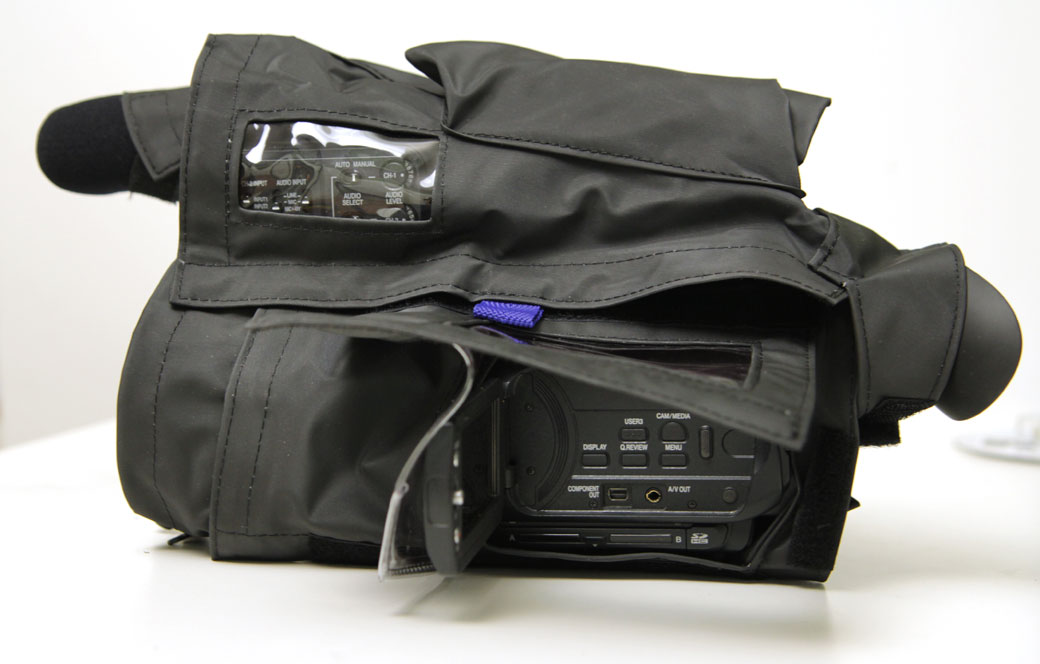 The JVC GY-HM100U ProHD Camera is a revolutionary product which incorporates many aspects of major broadcast camcorders packaged into a lightweight, handheld camcorder. Modesty ends there however, as the camera’s capabilities far exceed models in its class. With the ability to shoot high definition footage up to 35 Mbps, the camera ushers in a new level of quality, eliminating many problems associated with other methods.

The camera’s compact frame makes it easy to venture into uncharted territory. Long gone are the days of lugging around a brick with one hand. The GY-HM100U’s lightweight body allows for long run times without the fatigue. Whether you’re shooting a documentary, wedding, or grabbing the news, both your wrists and your arms will thank you.

JVC’s proprietary HD format is based on industry standard MPEG-2 compression, used for both HD broadcasts and DVD videos. By using the same basic technology as HDV and incorporating some advanced industry know-how, the GY-HM100U can shoot 720 at 19Mbps and 1080 at 25Mbps. The major difference, however, is the ability to shoot both resolutions at 35Mbps, producing the highest quality MPEG-2 video available! The format can be recorded in .mov form, making it easy to ingest into Final Cut Pro for quick direct-to-edit flexibility. For PC users, video can be recorded as ISO Base Media, which is compatible with virtually all major Non-Linear editors.

Unlike other cameras that record to expensive proprietary memory cards, the GY-HM100U shoots to the abundant SDHC standard. Recording hours of high definition footage across two slots; both are hot-swappable and can be quickly ingested into any computer or device with any inexpensive SD card reader. How’s that for cost-effective?

The 1/4″ progressive scan CCDs produce stunning images with picture perfect color accuracy. The sensors incorporate spatial offset technology, which places the red and blue sensors 1/2 of a pixel in respect to the green sensor, increasing effective resolution without sacrificing image quality or by using interpolation.

The camera comes equipped with a 10x HD lens developed by Fujinon, the leader in broadcast-level video optics. The lens takes advantage of a compact 3-aspheric element body, which decreases both size and weight. The lens exhibits exceptional quality while showing less distortion, color aberration, and flare. Additionally, the lens comes with a built-in lens flip-up cover so users don’t have to keep track of those pesky lens caps.

The Optical Image Stabilization incorporated in the lens helps defeat camera shake from handheld shooting, as well as turbulence produced from a moving vehicle. Since it’s an optical function, OIS can compensate for a greater amount of problems while avoiding any loss in image quality, which is common when using more antiquated electronic or digital stabilizing methods.

The camera’s digital signal processor encodes all formats from a pristine 1920 x 1080 signal, ensuring all footage is of the highest resolution and quality. By starting with the maximum amount of color and spatial information the recorded footage will prove crystal clear every time. Additionally, JVC has incorporated a series of noise reducing technologies that take the entire process to another level.

Just because the camera is small doesn’t mean its audio capabilities are. The GY-HM100U has audio control and capability almost exclusively found on ENG camcorders! Located just in front of the handle are 2 standard XLR inputs with phantom power. Unlike its MPEG-2 HDV counterpart, JVC has upped the ante by electing to use LPCM (Linear Pulse Code Modulated) uncompressed 16-bit audio, taking productions to that coveted ‘next level’. To ensure you get the most out of their sound system, JVC has provided a high-quality shotgun microphone to accompany the already sublime internal bi-directional microphone.

Taking its cue from JVC’s ProHD line of camcorders, the GY-HM100U uses an edge-detection technique for image focus-assist. With the increasing importance to verify one’s focus on lower resolution LCDs, focus-assist has become incredibly important. Unfortunately, it can be tricky at times. Some methods even obstruct the view of a frame, which can be both tedious and useless. The best part of the GY-HM100U’s method is that it doesn’t hinder the operator’s ability to frame a shot or follow the action, which in the end, is most important.

JVC’s exclusive technology allows users to shoot in extremely low lighting conditions. Whether you’re making that next great reality show or simply need to grab something in a dark room, LoLux mode has it covered.