Our first day of shooting Beyond Naked dawned with great promise. On Dec. 21, 2010, the sun broke through a thin layer of clouds and climbed over Seattle’s Kite Hill, where I was waiting with my camera. I knew that in 6 months, on this spot, we would shoot the final climactic scene in the film. This morning, however, alone with the crows, I tilted my camera down into a puddle and captured a timelapse of reflected orange clouds that would eventually become the title shot in the film.

A few hours later, I shot another promising event. This one, however, would not make it into the film. In fact, no one would ever see it. That’s because, less than 24 hours into production, I had already begun to lose footage.

We had 3 shoots that day, which resulted in quite a few sd cards to keep track of. As I was offloading media, I probably mistook one of the full SD cards for an empty one. I didn’t even realize it was missing until weeks later, because we hadn’t created a “dailies” plan to review our footage as it was shot. If we had, we almost certainly could have recovered it. Even if we had formatted the cards, it would have been a simple matter to recover them before they were used again using inexpensive recovery software.

This was the first of many data wrangling lessons we learned while shooting what ended up to be 4 terabytes of media. In this mutli-part post, I’d like to share the relatively inexpensive but feature-film capable system we devised for storing, organizing, retrieving and editing our media. Our simple system took us all the way from initial import to finished film – without any more lost footage. 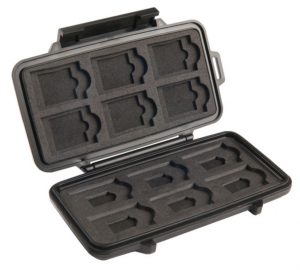 Securing the take. A secure workflow begins with securing your media. And organizing it. As a first step toward doing both, I purchased an SD card Pelican case designed to hold more cards than you’d likely ever use in a full day’s shooting. It resembles a book. On the left side, stored with labels facing up, I inserted formatted cards, ready for use. The right side started out empty. As the shoot progressed, I placed used media, label down, into the right side. This gave me a double safe way of keeping track of which cards contained footage awaiting import.

This system worked extremely well – except when I didn’t follow it. This is where I have to tell a brief, unflattering story about the one time I failed to use this system. While filming the most important scene in the film, the climax of the the parade, I was operating a steadicam in a sea of naked cyclists when my SD card ran out of space. I was so eager not to miss the action that I just popped open my media case, grabbed a fresh card, and shoved the full card into my left pocket. A little voice whispered “store it properly in the case.” I didn’t listen.

An hour later, in a euphoric moment atop Kite Hill at the completion of the ride, my cast and crew surprised me by chanting for me to get naked. As a show of solidarity, I caved. I whipped my pants off and danced a brief celebratory jig. As I pulled them back on again moments later, the little voice said. “Check your left pocket.” I reached in and a chill shot down my spine: it was empty. 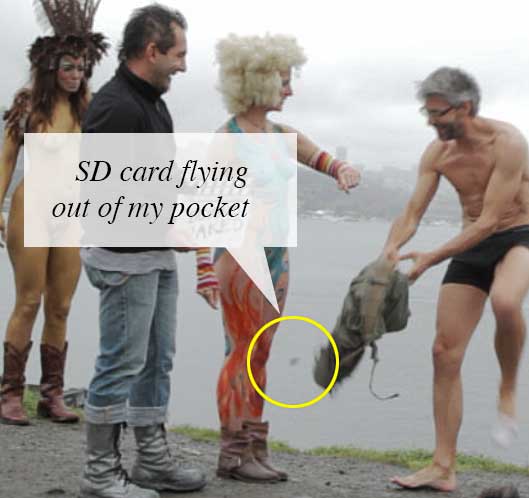 I lost it. I heard myself yelling at everyone to back up as I desperately scanned the ground around me for the bright blue chip. Nothing. I knew instantly that the card could have fallen out a hundred places as I had jogged down the parade route. What are the odds I would find it? A tiny glimmer of hope – that it had flown out when I pulled off my pants – faded as I searched the muddy, wet ground crowded with naked people.

One of the stars of the film, Molly Meggyesy, was nearby and asked me what was wrong.

“I think I just lost the most important footage of the entire film.”

She took one decisive step, leaned over, and came up with it. “Here you go,” she said. “Is it OK?”

I suppose the lesson here is that it’s best to keep your pants on when shooting a film. But I’ll let you draw your own conclusions. And I’ll pick up next time with Part II of this article, selecting primary storage for documentary film.