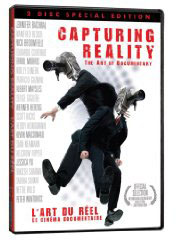 Cinematographer Steven Bradford came over this evening and we screened Capturing Reality: The Art of Documentary. It’s a 2-dvd set with a feature length doc on one, and nearly 4 hours of interviews with 38 documentary filmmakers on the second disc. The whole thing is produced by the National Film Board of Canada, an organization the supports Canadian filmmakers. When I was a kid growing up in Alberta, my dad would rent 16mm films from film lending libraries that the NFB made available in Calgary. He’d bring them home, and I’d play projectionist. That was movie night for our family.

The website for this film is the best documentary film site I’ve ever seen. It’s got part of the soundtrack playing, and you can roll over any of the 38 directors to play cuts of them talking about their approach to filmmaking.

Synopsis: Documentary filmmakers strive toward truth in one way or another, working with real lives and real events in the way that narrative filmmakers work with actors and costumes. But both approaches are manipulations. In interviews with 38 filmmakers, including Academy Award winner Errol Morris, Capturing Reality shows that there are as many approaches to making films as there are filmmakers.

Story Structure: This is an interview-driven film, a film that perhaps only filmmakers will really love. Intercut with the interviews are clips from many of the films being discussed. It’s thematically organized by major components of filmmaking, for example, Sound, Editing, Cinematography, Narration, Ethics. In particular, I loved the probing sections about what led them to become filmmakers, and how they decide on which ideas to turn into films.

Cinematography: Almost all of the interviews are shot and lit identically, in 3-light setups against black. I’m not sure that was the right choice, frankly – I would have liked to see something of each filmmaker’s environment if possible (although it’s possible the film was shot at a festival or something which would have made the environment meaningless). This approach DOES focus your attention exclusively on what the directors are saying, rather than their surroundings, which means content is king in this film. And the result is an treasure trove of ideas, tips, techniques and anecdotes, uncovered so rapidly that it begs for a second viewing. A nice touch at the beginning is catching the editors while they are putting their mics on, saying off-hand things. Sets the tone for what’s coming in the film.

Editing: The editor did a great job of in some places showing directors talking about their own films while at same time showing a clip from film, but often showing another director referencing another filmmaker’s film and showing that one. Or showing a clip that wasn’t specifically referenced by what’s being said, but works anyway. In many cases the directors say essentially opposite things, and the cuts show the diversity of opinion rather than attempting to enforce agreement in the edit, which felt true. In other places, directors nearly complete each other’s sentences, which really pulls the film forward.

Music and Audio: Great audio on the interviews, as one might expect from the controlled conditions they all were filmed under. The minimalist orchestral string-heavy music that runs under much of the film reminded me of Errol Morris’ recent films (but it’s not Philip Glass – although there are some clips of Glass from a documentary made about his life). One interesting audio fact: On “Touching the Void,” Kevin MacDonald’s sound guy came up with the sound used in the ice crevasses by slowing a leopard’s grown down 50 times. The result is an eerie, spooky sound that was perfect. Herzog had a great quote: “Music gives new insights – a different kind of vision.” By contrast, a couple of directors said they think music has no place in documentary. I side with Herzog.

This amazing film also turned me on to a whole bunch of films that I haven’t seen, which I can’t wait to get my eyes on: “Lessons of Darkness;” “The Peacekeepers;” “Salesman;” “The Scavengers;” “Metal and Melancholy;” “The Bomber’s Dream;” “Darwin’s Nightmare;” and directors like Scott Hicks, and Jessica Yu.

I’m not sure who said this, but it was one of the female directors in voiceover during a clip, and it’s the line: “The films that we make are our teachers.” But Velcrow Ripper got the last word: “The answer to life is becoming a documentary filmmaker.” Here here.