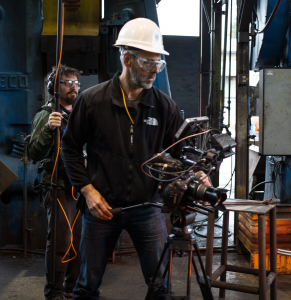 No shit. There I was. At the end of a long day of shooting for a commercial client with a rented C300mkii, and I get this error message: “Buffer overflow.” I tried to dismiss the error but the camera’s OS had frozen. I had to pull the battery to cycle power and restart. I hit record and same error. Additionally, another error popped up with something like “some files need to be recovered.” WTF?

My rented 256gig Lexar 3400 Cfast card was 6 minutes away from being full in slot A. I had a fresh card (same brand and capacity) in slot B, and my first thought was to switch cards. I did that, and everything was happy. I finished the shoot without further incident.

But when I inserted card A into the reader that evening, much to my surprise, my Mac froze and had to be hard-rebooted. Damn! Now I was getting nervous. This was a big project for a client who had flown to Portland from Austin, at considerable expense. I started to imagine the extremely uncomfortable conversation I was going to have to have with him.

“Um, you know that second day of shooting we did? The one where you kept telling me the shots looked so much better than our first day of shooting? Yeah, that extra day of shooting that you didn’t plan to pay for but did because I convinced you it would be worth it?”

I did some Googling, and discovered that the only Cfast cards officially supported by Canon for the C300mkii are all SanDisk cards, in capacities only up to 128GB.

I was extremely disappointed to find discover this fact, because my rental house, Lensrentals.com, had listed the Lexar drive as “works well with” the c300mkii. But who knows whether the Cfast card error thrown by the camera was related to the media anyway? Maybe it was something else. But I didn’t want to point fingers: I wanted to find a solution.

I put the bad card back into the camera, switched into media review mode, and held my breath as I tried to open the files. And guess what? I could open them! Big sigh of relief. If the data was readable on the camera, that meant the files would be recoverable. But how? 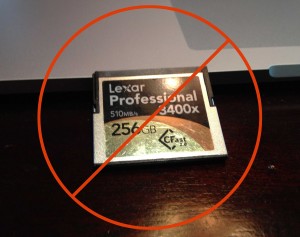 After several attempts to do disk first aid and data recovery on the card failed with the same OS freeze as before, I got another idea. Would it be possible to copy, one at a time, the files from the Cfast card onto the camera’s SD card, which normally records proxy media? Nope. No can do. There isn’t even an option for that. But as I was exploring the C300mkii’s file options, I discovered that it IS possible to copy files using the camera menu from Cfast card A to B. I took another deep breath and gave it a try and…bingo! The file copied and the copied card was readable on my Mac.

It took me about half a day to painstakingly go through all 128 files and copy them over, but it was the best half day I’ve ever spent.

I alerted the rental house to the potential card compatibility issue, and they said they’d investigate. I still have no clear optic on what caused this data drama. But I do know a couple of things. The first one is that a problem like this has never happened to me while shooting with my Sony FS5. The second is that the next time I rent a C300mkii, you can be damn sure I’ll be sticking with the cards that Canon has officially supported.

UPDATE: After investigating, the fine folks at Lensrentals.com told me “it looks like the card was defective” and issued me a refund for the card rental.  “We haven’t had any higher issues with these cards/cameras than any other. I wouldn’t hesitate to use them again – just perhaps with a backup or two.”