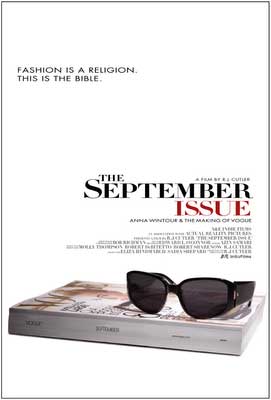 I’ve been head’s down editing a commercial piece for Eton School over the past week, which I’ll be posting as soon as it’s approved and we clear the audio track. I came up for air last night long enough to screen The September Issue with my wife. It’s the first documentary film in this series of 100 that I intensely disliked.

Synopsis: A soulless behind-the-scenes look at the inner workings of Vogue Magazine and it’s editor-in-chief, Anna Wintour. This film made no sense to me at all, until my wife told me that it was a response by Anna to critics who say she’s a militant bitch. It does little to improve her reputation, in my opinion, but at least this explains why it was made: it’s basically a feature-length PR stunt. Or to put it more simply, crap.

Story Structure: The film is structured around the 6-month-long process of producing Vogue’s largest issue, which is published each year in September. Unfortunately, the story train just isn’t interesting: of course they will meet their deadline (it’s Vogue, duh, did you have any doubt they would?) There’s some comedic relief in seeing the world of mostly cowering minions that Wintour has created for herself to live in, and the frustration on the part of her assistant editor who actually does the real heavy lifting to produce the magazine is palpable.

Cinematography: The quality of the video often was disappointing. Highlights were often blown out, and there was plenty of searching for focus happening. I got the sense it was shot with a crappy camera and included sloppy camera work so that it “looked” like a documentary, possibly because of some brisk decree issued from Anna Wintour to make it seem more believable.

Editing: There’s some nice cutting in this film, for example, the way in which we go very quickly from someone talking about a runway show straight into the show with just a few steps in between.

Sound and Music: The thing I liked most about this film was the music. The energy of the runway scenes brought the film to life with pulsing electronica. Of course, all warmth generated by said scenes was immediately drained when the camera inevitably settled on Anna Wintour.

After this, I’m looking forward to screening “Valentino: The Last Emporer” for another take on the fashion world.

One thought on “The September Issue | documentary 39 of 100”