When I read about the 1:1 crop mode on the soon-to-be released Panasonic GH2, my jaw about hit the floor. The possibility of turning my 50mm Nikon lens into a 500mm lens capable of shooting 1080p HD video on the GH2 by doing nothing more than flicking a switch is rather interesting. No wonder some bloggers are calling it “the best feature in a video DSLR yet.” From EOSHD.com:

1:1 crop mode is a tap directly into the sensor, it takes a 1920×1080 window from the centre of the sensor so no scaling or image processing is required. It then takes this RAW sensor data and bypasses the usual image processor completely, sending it direct & uncompressed to the encoder chip.

I mentioned this to a film industry friend of mine today, and he said “that’s cool, but your 60D can ALMOST do that already.” I was like, “oh yeah, I remember reading something about a standard-def tele setting.” But I’ll admit it: when I see SD-only when reading a manual, my eyes glaze over and I move on. I’m living in an HD world, and I expect everything around me to be living and breathing HD. So as far as I was concerned, the 640 crop mode on the 60D didn’t exist. Until today.

When I got home this evening, I decided to investigate this feature. I made this short clip with my Canon 60D, mostly to help myself understand it. It illustrates how it could come in very handy: shooting a tight close-up of something you want to frame in a window.

As this video illustrates, you would have to enlarge 1080p video to about 275 percent to get the same size as the detail captured in a window shot in 640 crop mode…and we all know what happens to any image when you try to blow any video up that much: it falls apart.

What’s more, if you apply this technique to 720p HD video, things look even better: you get from the 640 crop an image that is more than half the size of the 720p footage you might pair it with. So you could do things like side-by-side comparisons of medium and extreme close up subjects. All without leaving HD.

Of course, you could just be gobsmacked (as I suddenly am) with the fact that I can turn my 300mm lens into a 2,100mm lens, and shoot that impossibly-far-away-ship-with-heat-waves-dancing-on-it. Nevermind that it’s SD – I can shoot it. But then again…

Wow. Holy crap. This really does change everything.

My favorite book about film editing is “In the Blink of an Eye,” by Walter Murch, in which he theorizes about why editing works. I stumbled on this extraordinary 2-part video (40 min each), recorded during a talk he gave in London in 2003. It’s just packed with the kind of thoughtful brilliance that only Walter Murch can deliver. Everyone one of us who aspires to editing film should be so lucky as to have this man’s voice in our heads, quietly reminding us, “your duty is to expect miracles.” 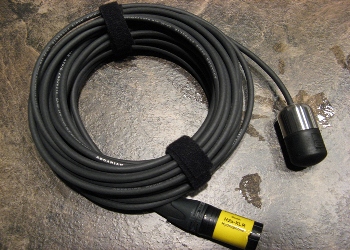 I’m taking what feels like a once-in-a-lifetime trip to the Galapagos next month (it’s actually the third trip for my brother-in-law, so who knows). While there, I’m planning to shoot a lot of professional video. And with that of course comes recording professional sound. I anticipate extraordinary proximity to sea creatures of the kind that’s very unusual, and I want to make the most of it. So I’m gearing up, and one of the things I’ll be packing to listen below the surface is an Acquarian Audio hydrophone. I did a fair bit of research before I made this purchase, and found a lot of options, most of them from companies based in the Northwest.

On the low end (pricewise), there’s a company in Vancouver, BC, called Cold Gold that markets a full line of hydrophones, many of them around $50. Right here in Seattle there’s a company called Cetacean Research Technology that makes hydrophones. But the fact that they neither list prices online nor offer online ordering was a deterrent for me.

I decided to go with the H2a-XLR hydrophone made by an Anacortes firm called Aquarian Audio. I ordered this one despite the fact that it’s nearly $200 (with the extra cable and shipping), not just because of the fantastic info on their website (which includes a slew of real-life recording samples), but also because in my research I found that a sound recordist whose work I respect, Miguel Isaza, uses this brand. He has a post on how to record underwater sounds with a hydrophone that helped inspire me to take one of my own on the trip.

I posted a question on the Acquarian Audio website and not only did Robb, the proprietor, respond personally – he actually called me and left a message that helped me decide on the appropriate length of cable I needed. I was thinking that 20 feet of cable would be about right for dangling off the boat, but he suggested that 30′ is the minimum to get below sounds that originate in the boat, such as generators that are often running on tour boats such as the one we’re chartering. In fact, he suggested 50′ would be best, but I’m going with the 30′ length, which is one of the standard configurations available on the Aquarian Audio website, because of space considerations (I’m already taking too much filmmaking equipment).

I’ll be posting samples as soon as I’m back from the trip. One last thing: here’s the best brief primer I could find on how to make underwater recordings of sea life (includes info on how to rig microphones – good stuff): Taking a Picture of Underwater Sounds (PDF, 66 KB)

I’m packing my bags for filming in the Galapagos Islands in December. That means I’m packing gear that, like the wildlife that Darwin discovered (and I’m looking forward to meeting), is adaptable to fast-changing environments. That’s why I just placed an order for one of these sweet looking mics, due to begin shipping in a week. Paired with my H1, this is the killer combo considering it doesn’t need phantom power. Bonus: the mic comes in a waterproof case. Sold!

I discovered a publication called The Believer recently, which features some of the most interesting and informative writing about filmmaking I’ve ever seen. The 2010 film issue, which was published in April and can be backordered on their site, has thoughtful, well-written interviews with Harmony Korine, Ilisa Barbash and Lucien Castaing-Taylor (makers of the beautiful shot Montana doc “Sweetgrass”), and Gary Hustwit.

The Believer has a welcome bias toward documentary film in their content, and an edgy editorial approach that allows them to publish hand-drawn comics alongside top-10 culture lists. And to top this issue off, there’s even a DVD of short films from the Yugoslavian Black Wave. Hours of fun.