I DP’d a short promo film for the 60 Second Film Festival recently, which involved quite a few drone shots. After nailing them all with my Phantom 2, I made a stupid mistake: I relaxed. With my eyes off the drone for a moment,  a huge douglas fir reached out and swallowed it. You gotta keep your eyes on those trees! A professional tree climber retrieved it a day later, but it’s gimbal was damaged. When I considered the cost of repairing it, vs. purchasing a new Phantom 3, I made the decision to upgrade.

After less than a week with my Phantom 3, (which I purchased from the fine pros at The Copter Shop in Woodinville) I can assure you that crashing  my Phantom 2 was the best thing that could have happened to my aerial cinematography. Here’s 5 reasons why.

1. The DJI Pilot app is ridiculously awesome. My head is still spinning with the mad power it puts at your fingertips: a map that shows you where the drone is and how it’s pointed, an HD monitor that gives you a beautiful real-time camera view, ability to override automatic exposures or temporarily lock them during a shot, ability to switch between stills and video, and so much more. With a finger swipe, you can hide the overlays and just see the gorgeous Lightbridge video stream. Going from Phantom 2 to this isn’t just an incremental upgrade – it’s an altogether different way of flying.

2. Full manual exposure controls. On the fly, using the Pilot app, you can assert full manual control over exposure. So, if you want to do a slow tilt up over dark green water to reveal a sun-drenched horizon, now you can do that without blowing out the horizon as it comes up. Try that on your GoPro!

3. Integrated 4k camera. The built-in camera is much easier to use than GoPro Hero. For starters, you don’t have to go through the tedious step of replacing camera batteries – ever – because the camera is powered directly from the flight battery. Next, replacing the microSD card doesn’t require doing surgery on the camera with tools – just insert it directly into the side of the craft. Also, the lens has threaded filters, which is going to make it super easy to mount ND filters as soon as they are on the market (the fine folks at Snake River Prototyping assure me they are hard at work on making compatible filters even as we speak).  Also, the camera doesn’t have that silly fisheye problem that all GoPros suffer from. Sold!

4. Lightbridge. You get crystal clear HD video transmission in real time, and it allows you to fly far, far away. Like a mile or more, and still see clearly. For me, this makes full FPV flying a real option for the first time. The video transmits through semi-permeable objects like trees, no problem, while my Phantom 2 would go to static the moment I went behind a tree.

5. Instant fine-tuning of stick sensitivity. When you’re doing aerial cinematography, you want very sluggish sticks at the beginning of the stick, but you want them to respond normally at the far end of the stick. That gives you a fighting chance when doing complicated moves like circling an object, or for a parallax shot. Or just for doing a slow, feathered start or stop to a move. On my Phantom 2, I tired all kinds of advanced calibration, and ultimately junked all of them because I couldn’t get it right. Part of the problem was that you had to connect to your computer to apply a calibration, then disconnect, test, and try again. 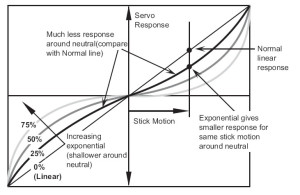 With the Phantom 3, you get the ability to set the response curve of the sticks (see graphic at right) without connecting to a computer. All the configuration options are a few swipes away in the DJI Pilot app.

After just one evening of test flying and stick calibrating, I was able to pull off a very difficult circling-while-climbing shot that I never would have attempted on my Phantom 2. And it feels like just the beginning of what’s possible with this craft.

A Life and Death Decision

My most recent project, for UW Medicine, explains palliative care through the eyes of Mark and Alice Beaty, who faced a life-and-death decision when their son Adam was in a terrible accident.

Working on this video, I was reminded why story is king. Palliative care is a pretty dry topic to talk about, but listening to Mark and Alice tell their story is arresting. And by breaking up their story into several parts, we were able to get the client’s required background into the piece (who their largest donors are, etc.) without it becoming overwhelmingly boring.

This piece was shot over three and a half days of interviews, with b-roll comprised of stock footage, family photos and drone footage shot with my Phantom 2.

If there’s one thing I learned on this project, it’s that  a 2-person crew just doesn’t cut it for projects of this kind. My assistant Ryan Schwalm and I were physically overextended by having to push a huge cart of equipment around to the many locations. And a two-camera shoot really needs an operator for each camera – it’s not possible for me as director to do a great job interviewing AND maintaining focus.

I just finished another shoot for a different client in which I had a 5-person crew, including myself (gaffer/dp, grip, camera assistant, and sound recordist). That was a revelation to me: everything ran smooth, nobody was stressed out, the client was thrilled, and I actually enjoyed myself. Wow.

I will be planning for more crew on just about everything I do from here on out.