My partner Lisa and I have just emerged from a marathon two weeks of editing our feature-length documentary, Beyond Naked. Too much of that time, I am pained to say, was spent loading and unloading events and projects. Final Cut Pro X has issues after more than a dozen or so large events are loaded (our film drew on 2.5 terabytes of proxy media alone, so loading the entire film at once was completely out of the question).

Somehow we got through the incredibly tedious process of manually moving dozens of Event and Project folders back and forth each time we needed to work on a different sequence. Working this way gave me new respect for what it must have been like in the days when editors actually had to make physical cuts on real film, stored on countless reels.

As a quick aside to anyone snickering “I told you how much Final Cut Pro X sucks,” I will state that my confidence in FCPX remains unshaken. I have really only one other negative thing to say about FCPX in this entire project from start to finish, and I’ll save that for another post. But suffice it to say that I remain a huge fan of the creative power of FCPX. It gave wings to our imagination on this film.

We locked picture last week, and I headed to England, where I am now, for a family vacation, taking a proxy version of the film with me on a Lacie 2big Thunderbolt drive for audio mixing.

And here, without Lisa looking over my shoulder telling me which file I had loaded already and which one to load next, is where I finally threw up my hands and said “there’s got to be a better way.” I wish I had done this weeks ago. Because, as it turns out, there is a better way. It’s called Event Manager X, and it’s a magical $4.99 utility designed to do just one thing: load and unload events and projects for you. 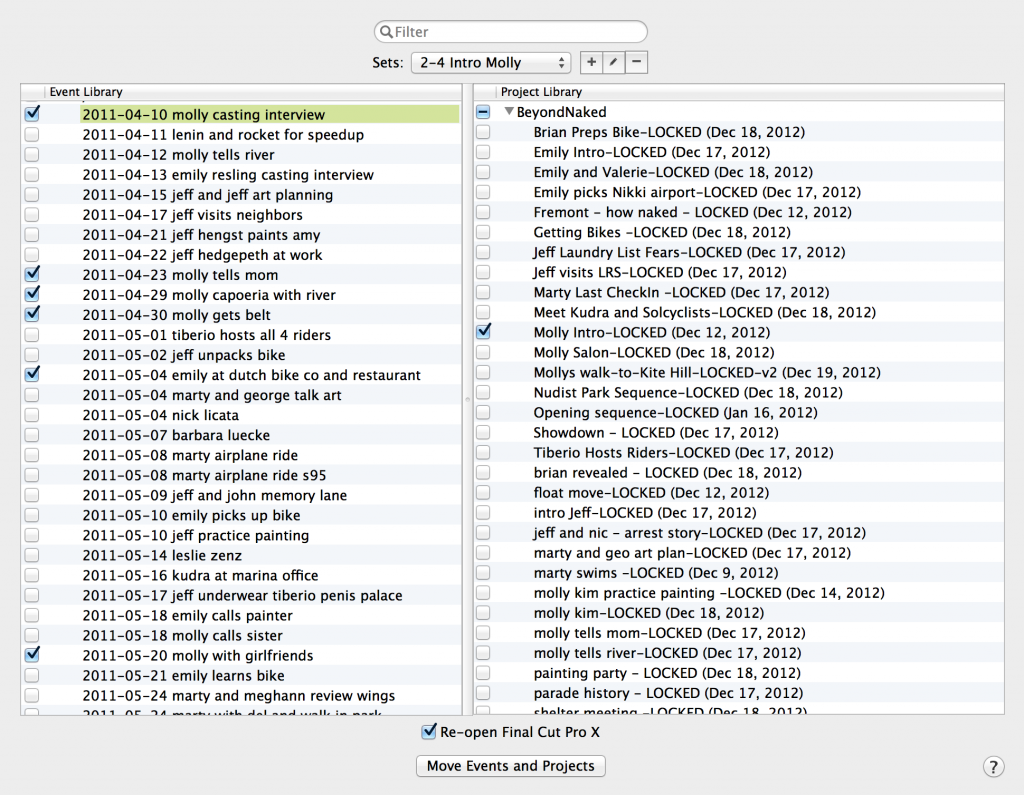 Our film has 33 sequences (projects in FCPX terms) from opening sequence to credit roll. Each sequence has Events associated with it. Event Manager X allows me to create sets that associate Events with Projects. When I’m ready to work on a new project, I simply switch over to Event Manager X (EMX), select the project I want from a popup menu, then press the Move Events and Projects button. Without ever dragging a single folder, all the old events are put away, and the new ones are brought online, and FCPX is restarted so it can load them. I can’t overstate how beautiful this is.

Before we discovered EMX, we would have to have four windows open, and constantly drag events and projects back and forth between Final Cut Events and Final Cut Events – Parked, and between Final Cut Projects and Final Cut Projects – Parked. It’s amazing how many times we accidentally dropped files into the wrong place, occasionally even losing them. When you’re sleep deprived, and if you’ve ever completed a feature-length edit than you know what I’m talking about, you shouldn’t be expected to do that with 100 percent accuracy. In our experience, sometimes the difference between actually looking at a clip and not was thinking about how much work it would be to load it up. No longer. 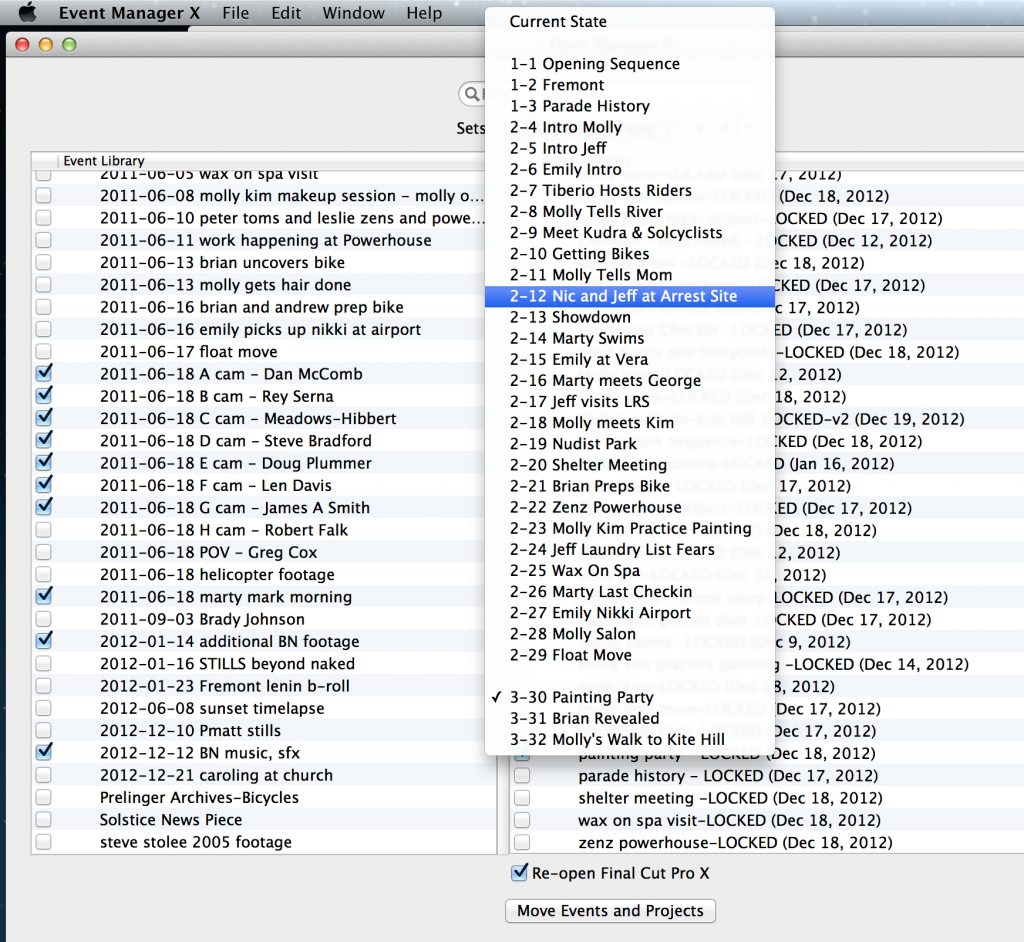 Suddenly, instead of pushing folders of files around, I’m actually getting work done. Instead of juggling lists of event names in my head, I’m solving creative problems.

Someday soon, I hope that FCPX can automatically do this. Until then, there’s Event Manager X.

Bug behavior alert: There is a behavior in Event Manager X that causes the last item you’ve checked to become unchecked when you switch to another application while building sets. This is a problem if you are switching between FCPX and EMX to create sets. For example, if you start to create a set in EMX, than switch back to FCPX to see which events you need to add, the event you last selected becomes unselected when you switch back to EMX.

Workaround: Write down all the events you’ll need in the set in Text Edit, make sure the document fits on the screen beside your EMX window, then copy them all down at once without switching between the apps.

Update: Philip Hodgetts, the app’s creator, responds “this is planned behavior you’re falling foul of. In order to keep Event Manager X in “sync” with the Finder, it rescans the hard drives, and updates the interface, every time you switch back to Event Manger X.”

Bug alert 2: If for some reason your hard drive is disconnected while making a set (as happened to me when power unexpectedly went off at my brother-in-law’s place where I’m staying in the English countryside, where apparently this happens all the time), all projects and events managed by EMX will turn red and it won’t reconnect to the drive when it is plugged in later. Instead, it creates a new, empty set. This means you will lose all of the work you’ve done creating your sets (the popup menus will remain, but none of the events or projects they contain will be selected). I call this a major bug, because I had spent hours building my lists when it happened to me and I hard to start all over again.

Update: I discovered this bug is actually worse than I thought when power was cut for a second time to my hard drive AFTER I had rebuilt my lists. This time I fully expected that I would simply restart when power came back on, and everything would be jiggy. But no, no no. Oh no. Same thing as above: all my carefully built sets appeared in red, and nothing can reconnect them with the drive, even though it is now mounted. So here I am at 10:58pm rebuilding my EMX sets for a third time. Grrrr.

Further update: Gregory Clarke of Assisted Learning adds this (a bit of a kluge, but a way to save some of the retyping):

Basically the set you’ve made is keeping the file paths for the wrong volume now it’s been connected again. It occurs to me though that the Sets database is just a text file, so you could carefully find/replace the wrong volume name with the right one.

In your user’s Library/Application Support/Assisted Editing folder is a file called Event Manager Sets.yml. Open that in a text editor and you’ll see the contents. The item labelled “name:” is the set name, and “array:” is the baths to the Event or Project folders. 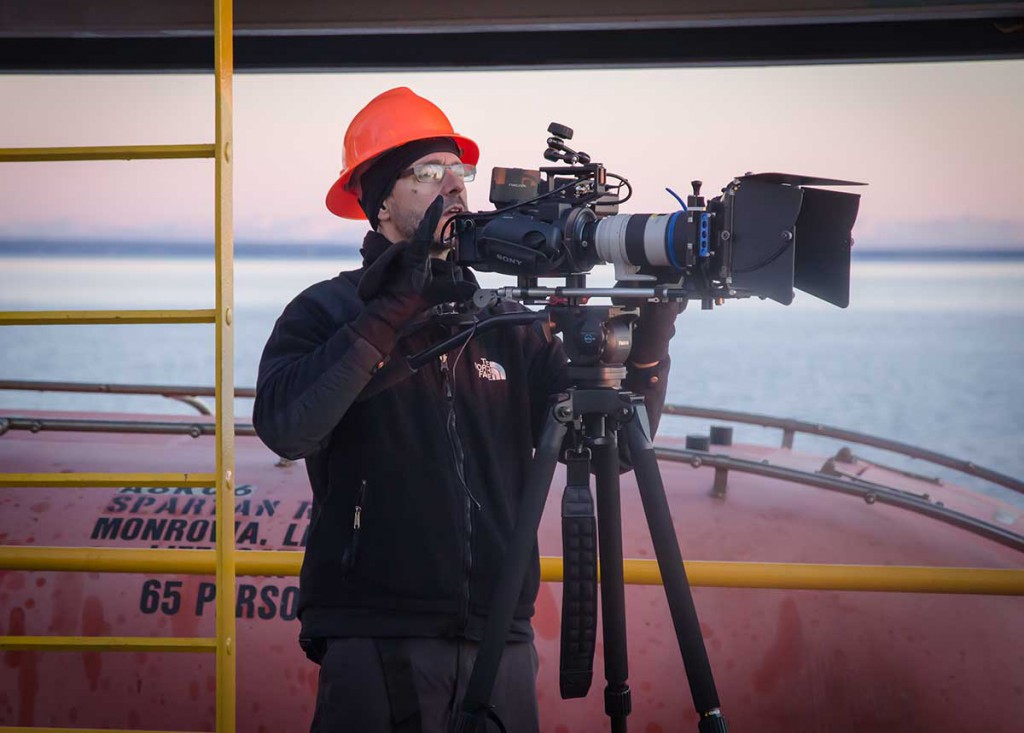 When I was shooting in Alaska a few weeks ago, I did a lot of long-lens shooting with a follow focus.

I took a critical piece of equipment with me, without which everything wobbles out of focus at the slightest touch. Here it is:

It’s a Shape Lens Support, and it does a brilliant job of holding long lenses steady while shooting and focusing. One thing I discovered: when using with long glass such as my Nikon 300mm f/4 and with a Canon 70-200 f/2.8 zoom, it’s essential to place the support at the every tip of the lens, rather than at midpoint. The follow focus has to be placed in the middle between the two points of contact – between the lens support at the lens mount. Otherwise it doesn’t work at all.

One thing that happens on documentary shoots where you’re dragging gear around all day is that anything that can come loose generally will. This Shape lens support looks well designed – solid metal. But it’s significant flaw is that if the black tightening knob the holds the vertical bar comes loose, there is nothing to prevent the whole thing from unwinding and falling apart. That’s what happened to mine when I was standing on grated deck. I heard the clank and watched the parts drop through the metal grid of the deck and disappear into the Cook Inlet. Bummer.

Luckily it happened toward the end of the shoot. When I got home, I sent an email to the folks at Shape asking if they could sell me the replacement parts. They did one better: they shipping me the part for free.

How’s that for classy?

I’m not a fan of this particular design, but I am a fan of Shape’s customer service. And I look forward to trying more of their gear in the future.

I had an opportunity to meet Jason Silva after he delivered the keynote at this year’s Seattle Interactive Conference. His enthusiasm for his ideas is absolutely contagious. Jason told me he liked the sound design of our SIC 2012 teaser video so much, that he wanted me to cut his next “cinematic espresso shot.” What’s not to love about someone in love with bold ideas?

The results of our collaboration are now complete, and judging by the number of views (more than 5,000 plays in the first three days) it could well become the most popular video I’ve had a hand in making yet.

This was pretty much an editor’s dream gig: an open-ended opportunity to freely interpret huge ideas with awesome stock footage (most of it from shutterstock.com) and sound effects (most from Sound Ideas – a great company from my old stomping grounds in Richmond Hill, Canada). I even managed to sneak in one of my own shots. Can you guess which one?