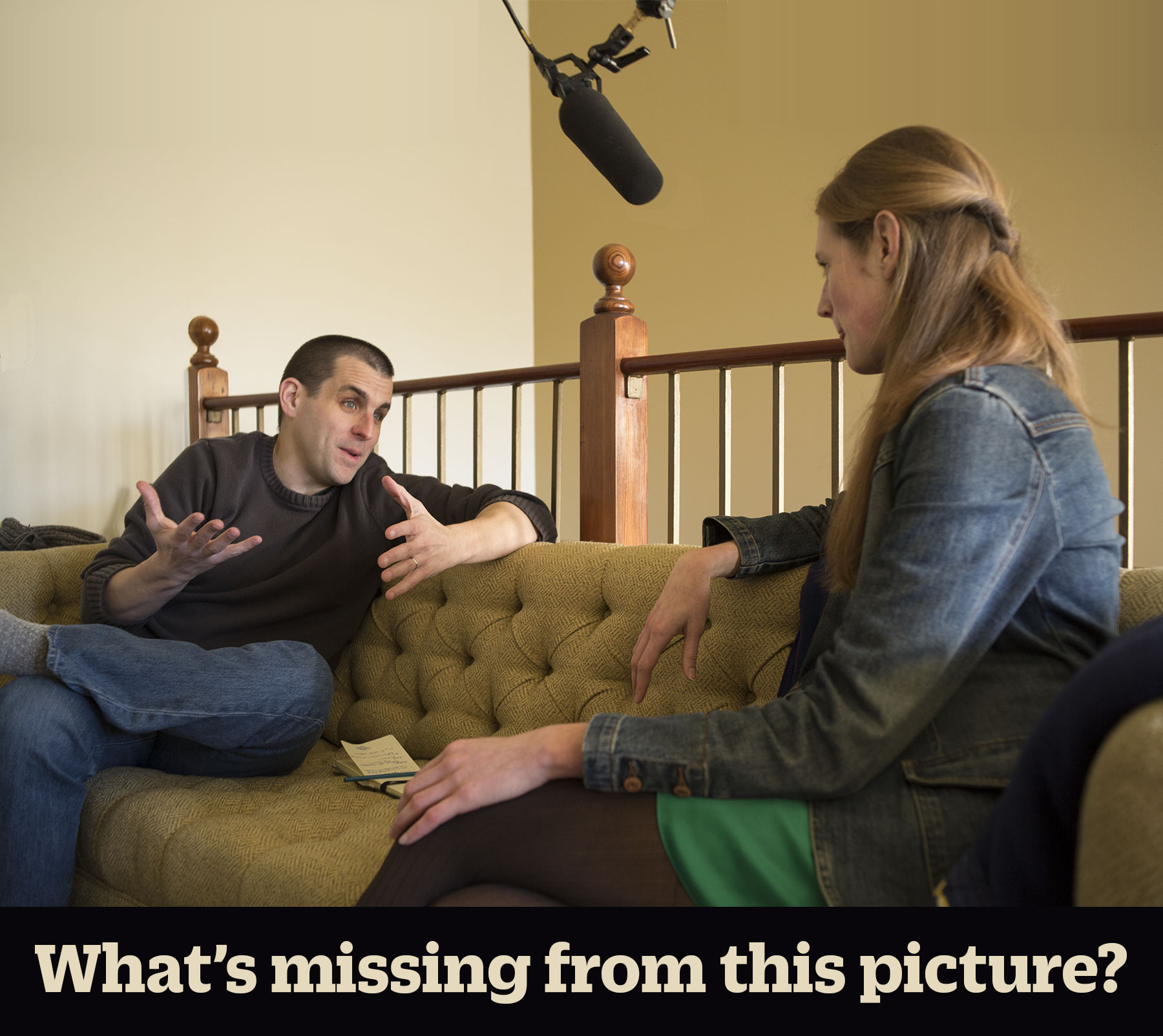 I know the key to better documentary interviews. A silver-bullet technique that has enabled me to make award-winning films like The Coffinmaker and The Metalsmith (both Vimeo staff picks). In the photo above, Scott Berkun is using the technique to interview Martina Welke of Zealyst for We Make Seattle. It’s not difficult. In fact, it involves doing less than what you’re currently doing.

Huh, you ask? How can doing less make my films better? I’m going to share this technique with you in a minute. But first, some background.

When I began making documentary films five years ago, I was coming from the world of still photography. In that world, it’s possible to be a one-man band and do a great job. Not easy, mind you, but totally plausible. Film is a different animal.

Consider for a moment how many balls you must to keep in the air to pull off the simplest of shoots, the interview:

And that’s just the production bit. If that all goes well, you get a bunch of footage and audio that you must store on a hard drive, then go to work on. That involves importing into your editing suite, watching it, listening to it, cutting the interview, carefully placing b-roll on top of that to hide your cut points, adding music, color correcting, audio mixing… Whew, it’s a lot to manage.

But let’s stay focused on the production piece. Now, consider that these variables don’t just have to be aligned for a split second, as with a photograph – with film everything has to STAY perfect for the duration of the shoot. If the sun comes out halfway through, you have to change exposure. If the subject gets excited and leans forward, you need to adjust focus. And, all the while you need to maintain human contact with the subject, so they feel you are present in the conversation with them.

It’s too much for one person to manage. Really, it is. Two people can swing it. But one? Forget about it.

Since I couldn’t do it all, I considered what I could NOT do, and still get the job done. Can you guess what that was? For a guy most comfortable with a camera, it was a tough one to swallow. I skipped the eyes and went for the ears.

If you had to watch 30 minutes of someone talking without sound, how long would you watch? Now, if you had to listen to 30 minutes of audio without video, how does that change things? A lot. But wait, you say, we’re making a film, not a radio program! Yes, but if you’re making a film, doesn’t that mean you want to show action? And does a person sitting in a chair really qualify as action?

The key to getting better documentary film interviews is: don’t bring a camera. You heard me right. Leave the camera at home. That way, you won’t be tempted to use it. Instead, you’ll free yourself to think about the story. You’ll connect better with the subject without your eyes constantly wandering away from theirs to check focus.

But what if you have plenty of crew? You should probably still skip it! Here’s why: because most people are intimidated by cameras. They are distracted by thinking about how they look, their makeup, wardrobe, etc. Consider this: How often do you FaceTime someone when you want to call them? I think I’ve used it twice in the three years I’ve had an iPhone. It’s invasive. I’m more comfortable talking as opposed to acting. Same is true in your average documentary interview situation. Take away the camera, and you take away the self-consciousness. Take away the self-consciousness, and you get straight to the good stuff. The scary, emotional stuff.

There’s another benefit to doing interviews without camera: it forces you to shoot better b-roll. In fact, it forces you to think differently about b-roll altogether. No longer is it filler to get you through – it becomes everything! So you have to think of action that can carry the story. And your film just got better.

There’s another benefit: you won’t be able to make the mistake of including too much talking head time, because you don’t have any!

It’s a big commitment. But try it once. You may be surprised with the results.

11 thoughts on “The invisible key to better documentary film interviews”