Werner Herzog was excited. He’d just learned that he was a finalist for a National Science Foundation grant to make a film about Antarctica. But then came the bad news: the other finalist was James Cameron. It costs about $10,000 a day to put a person in Antarctica, so the NSF had a question for the filmmakers: What is the minimum number of crew you need to make the film? Cameron replied that 35 should do it. Herzog pounced. “I need two people,” he said, “and one of them is me.”

Guess who got the gig? 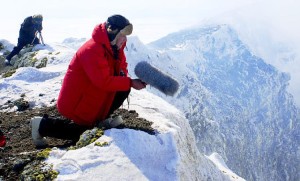 In addition to directing Encounters at the End of the World, Herzog assigned himself the job of sound recordist. The film went on to become his first to be nominated for an Oscar.  And it’s no surprise that Herzog, who relishes the “making” part of making movies, chose to wield a microphone instead of a camera. Because sound is the most important part of filmmaking.

Seattle filmmakers will get an opportunity to learn why that is true on May 27, when the Sound Advice Tour rolls into town hosted by legendary Hollywood sound designer Frank Serafine. Designed for filmmakers, editors, and aspiring sound engineers, this all-day workshop will cover techniques and tools to expand your skills and give you a solid foundation in the effective use of audio in all of your projects.

One of Hollywood’s top sound designers, Frank Serafine is an academy award winning sound designer who has created sounds for television shows, video games and major motion pictures, including, Poltergeist and The Hunt for Red October, which earned its sound editing team an Oscar. 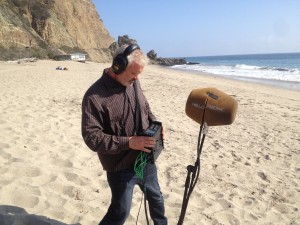 I had an opportunity to interview Serafine by email recently to learn more about film sound and what filmmakers can expect from the one-day workshop.

Q: The workshop materials state that sound is 70 percent of a movie. How such a big number?

FS: This is something that major directors have been quoted saying, not only me as a supervising sound editor / sound designer. I understand the full importance, drama, atmosphere and psychological impact sound has, even over picture.

Sound is our most prominent sense and it’s omnipresent. We can only see 180 degrees in front of us, but we can hear 360 around. So, it’s really, really important to the success of any film.  Things that can save our life are embedded into our DNA through our hearing sense. For example, if we hear a tiger roar, which we’ve been trained to know a tiger roar. It’s a scary thing, but deep down if you hear that sound in the wild you know danger is lurking. Even if you can’t see it, you know something is wrong. In film sound we trick the listening audience senses into believing in the same way. With the latest sound technology coming into play nowadays we’re really able to trick the senses.  3D surround sound are becoming so sophisticated due to advanced scientific research in reflection and convolution studies, computers can now analyze and visualize the physics of what sound actually does and how the human brain perceives and reacts to it. 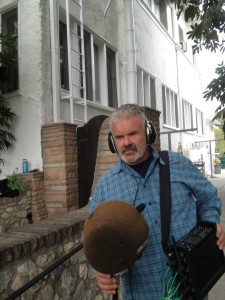 Q: If there is just one thing that a person can do to improve their film audio, what is it?

I would say production audio may be one of the most important parts of learning how to get the best possible sound on the set and in the field. Using a variety of different technologies that are available to us through our new MZed sponsors, Sony, Roland and Rode. Were using the latest location sound field recorders, microphones, boom poles, wireless transmitter/receiver systems, cameras and accessories that help us initially capture the best possible location production sound. The critical thing about good quality production sound is that it carries all the way through the film and an extremely important thing to making your film the best you can from the very beginning. It’s better not to be forced to: “Fix it in Post.”

Q: Why are you taking time out from your busy schedule to share what you know about sound design?

I’ve been an educator throughout my entire career. During the time I worked on the early Star Trek and Tron films and Hunt for Red October,  I was also busy  teaching at the UCLA Extension. I was also hired to write the curriculum, mentored over 1500 students, redesign and run the sound department at the Los Angeles Film School in Hollywood.  I always enjoyed passing on what I’ve learned from my great mentors, which I think is an important thing to do, otherwise who-else is going it pass on? I really did learn from all the best through out my career, and I’m excited to share all of that with my MZed attendees in 33 cities, throughout the US and Canada this spring.

I also really like Jeff Medford, and what he is doing with MZed. They have been doing advanced film educational tours around the world for a very long time now.  This is their first film sound tour.  With my Sound Advice Tour, not only are we educational, but highly entertaining. I’m using equipment that has never been seen or heard before, and I’ve been training and learning a lot of new things about this gear. I feel like educating people is just another part of my job. It’s what I love to do and something I’ll do the rest of my career, which will be until the last day I’m alive.

Here’s an outline of what will be covered at the workshop:

Even if you’re primarily a camera person, this will be a killer opportunity to learn the importance of sound and how to solve the problems you’ll encounter in production.

Learn more about the Sound Advice tour and sign up for the $299 workshop.