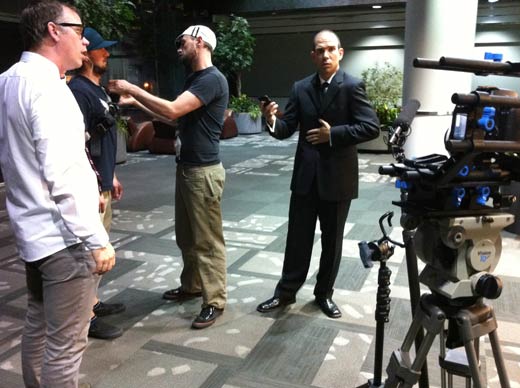 One of my Biznik buddies, Art Torelli, sent me an introduction to Seattle filmmaker Michael Maniglia recently, which resulted in us having coffee. Turns out we live less than 5 blocks from each other, we both shoot regularly with the Canon T2i, and we both need help on our various projects. Mike’s primary focus is on narrative film, while mine is on documentary, but I’m keenly interested in getting some narrative experience because I want to make films that blur the line between the two. So when he offered me an opportunity to operate camera on a short film he’s making, I jumped on it. 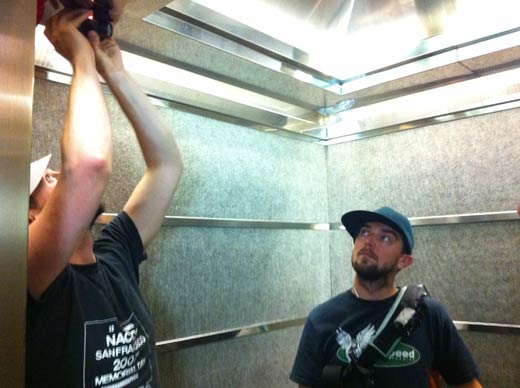 The shoot took place in an elevator, in a Seattle office building after work hours. Luckily, we found one elevator out of four that didn’t complain when we stuck a sandback in the door, to lock it open, which allowed us to shoot. In the shot above, sound engineer Kelsey Wood places a small HD camera into the elevator for a shot that mimics a security camera in the scene. 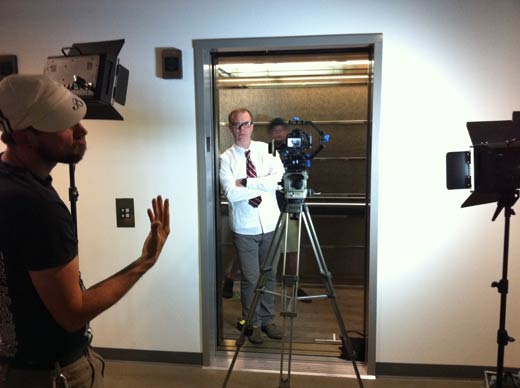 My biggest take-away from this experience is just how VERY different narrative work is from documentary. Narrative is all about careful planning ahead of time, having a great script, and then deadline-driven production. Since nobody was getting paid on this project, it was even MORE deadline-driven: you have a limited amount of patience from everyone involved.

I picked up a few tricks from Kelsey on how to get great audio: use one of those hidden wallets that strap around your waist to hold the wireless lav transmitter to hide the mic on people who are wearing t-shirts.

And a lighting tip as well: we were using LED lights, and you have to really watch out for the obvious reflection signature they leave on anything glass or metalic. Once we covered the light’s face with paper to diffuse things, the reflections softened and the lights were usable.

It was my first experience using a really nice fluid head, as well, and the difference between the Vinten Vision 10 head we used and my Manfrotto 503 fluid head is unbelievable. Expensive fluid heads like the Vinten really are worth the money you have to plunk down for them: they make panning and tilting dreamy smooth.