Update 12/23/2012: We just locked picture, and I have posted an update with an essential tip on media management for anyone using FCPX to cut their feature film. I’ll add one more absolutely critical thing that I’ve learned since writing this: never, never, ever choose the option of allowing FCPX to store your media outside of the Events folder. This causes an epic problem if you want to make a copy of your original media to, for example, send your film off for color grading. Just put the media where FCPX wants you to put it, and you’ll be fine. OK, back to what I was saying when I started the edit a year and a half ago…

In an effort to share what I’m learning, I’ve decided to post regularly about what it’s like cutting my film on Final Cut Pro X. Actually, the real reason is because I can’t imagine doing nothing but editing between now and Dec. 21. No, I need to be chatty or I’ll drive myself crazy. And by choosing to cut the film on FCPX, I know I’ll have a lot to talk about.

The first order of business is getting organized. The entire project weighs in at more than 3 terabytes of audio, video and stills. In production, I did what I think was a solid job of labeling every shoot as we completed it, putting everything into folders named as follows: date of shoot, followed by keywords describing it, as in: 2011-03-12 powerhouse photographer meeting. This has the benefit of always sorting correctly by date, and the contents are recognizable at a glance. Inside of this folder, I’ve got separate folders for a cam and b cam (we shot all but one day on no more than two cameras). We did dual-system sound, so almost every shoot has a corresponding file in a root level folder labeled Audio. Almost none of it has been synced.

It’s taken me about a week of noodling around with files and doing a couple of just-for-fun projects to wrap my head around FCPX’s brave new metadata world. And I finally get it. It’s very cool. But it’s different, and that takes patience. At a very high level, events are a lot like a folder into which you place your footage and all the media files associated with your project such as audio and stills. Final Cut actually creates folders for you and either stores the original media or an alias to your original media, but that’s behind the scenes. In the Browser Library, the two principle tools are keyword collections and smart collections. You can still create folders, but the only thing you can put into the folders are the two aforementioned items. So all your media has to be in one of the two before you can get started organizing. Final Cut helps by creating keyword collections for you based optionally on your folder naming, and it does some basic scanning of the files to try and identify people and categorize them into shot types: medium shot, group shot, two shot, etc. But I’ve found it gets it wrong a lot of the time with my footage, possibly because many of my shots have more than one type of scene (starts out as a medium shot on one person, and moves into a wide group shot, for example).

When I first started playing with the new Event library, it seemed to me that I should create a single event for the entire film: that way, I could easily find by keyword from the entire project. But I quickly realized that was a mistake: Final Cut has to read-in every event into as much RAM as it can whenever you select it. And you can imagine what a performance hit this would mean as the event grew larger and larger (even with my 16 megs of ram, it just won’t cut it). So I’m treating each “shoot” as an “event.” Note this is often – but not always – the same as organizing by date. Some days we had up to four shoots, and in each case, each is a separate event. Also note: It’s still possible to search the entire event library for the entire film: just click on the disk that contains all the events, and it loads them all (taking forever, as you can imagine, but I can imagine times where I’ll want to search everything for something I can’t otherwise find, so I love this option.)

I’m assisted by two people on the edit: Lisa Cooper and Josh Huffines. That means it’s complicated: I’ve decided to split the project into thirds, sending each of us with a manageable chuck of audio and video, and tasking each with importing each shoot into its own FCPX event, syncing the audio, and doing some very basic keywording of the data.

I discovered quickly that FCPX’s very cool audio syncing capability is only half useful in our task of syncing quantities of audio: it only works if you know which audio clip belongs with each video clip (I tried running it on more than two clips and it creates a monster). So we’re using DualEyes, the stand-alone audio syncing software from Singular Software. DualEyes works by creating a new audio file that is named with a combination of the video and audio clip names, and it places the new audio file into the video folder, ready for synchronization in FCPX. With the file named thusly, it’s a snap to sync each file using FCPX’s “synchronize clips” feature. However, it’s quite time-consuming: every single video and audio clip has to be touched manually.

I’ve run into a serious problem with DualEyes: it crashes whenever any of us select the “correct audio drift” option. Bruce at DualEyes has been extremely helpful in trying to resolve the problem we’re having, and he event gave me a new version of the software to try that supports multiple cores (and runs MUCH faster). However, as of now at least, it still crashes. The good news, though, is that the “correct audio drift” feature doesn’t seem to be necessary for our files, as I believe they all match (but I’m not sure about that, actually).

I headed out of town for the weekend, and naturally I wanted to take my work with me. However, I did not want to take my entire Drobo Pro with me, especially as it was in the process of doing some 14-hour data redundancy routine when I was preparing to leave Friday. So I copied off a chunk of the audio and the video files, put them onto my iMac’s internal hard drive, and hit the road.

I spent the weekend running DualEyes on audio and video files, and importing the results into FCPX events, where I linked them. Then I came home tonight, all ready to move the events from my local drive back to where they belong: on the Drobo Pro. It couldn’t be easier with FCPX: just Cmd-click on each of the events, the from the File menu, select Move Event. But this is where things started getting messy. First, it took forever to copy, which made me nervous: it shouldn’t actually be making copies of the files – I only ever want to reference the original files. But obviously when I made a copy of the data, then treated it in FCPX like the original, I was letting myself in for issues. In the old FCP 7, I would just delete the files I didn’t need, then the next time I started FCP, it would ask where the files were, and I’d hook up to the originals. I’m hoping that will work on this version as well, but I’ve heard it won’t. So I’m wondering how I’m going to sync to the originals. Maybe the “consolidate project media” item on the file menu? Or the “organize event files”? Both are not selectable while background tasks are running, so I’ll have to wait until tomorrow morning to see if that’s a solution.

But if you think I’ve got many bad things to say about Final Cut X, you’re probably going to be disappointed. The tools blows doors off of the old version. It’s FAST. So fast, that I’m still in disbelief and the amount of waiting I never find myself doing. Huge rendering, transcoding, and file management tasks run in the background and have no perceptible impact on the work I’m doing. It’s almost unbelievable, and I love it. Another feature I’m gobsmacked about: the skimmer. It’s easy to underestimate this little wonder, but it makes my ability to sample vast amounts of footage quickly almost god like. But most of all, FCPX brings the fun back to editing. Instead of wrestling with my footage, I feel like I’m dancing with it. 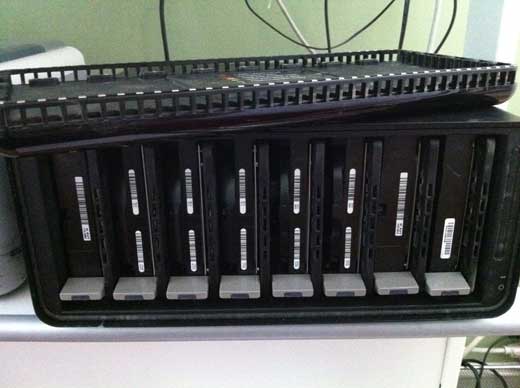 Just when I thought it was safe to edit on my Drobo Pro…it up and dies on me. Weird things began happening not long after I connected the unit to my new iMac. As I was copying huge amounts of data using Final Cut X (which I was using to create proxy media of my entire film footage), Final Cut would sometimes freeze. Then the system would freeze, and I had to force-reboot more than once. With all the badmouthing Final Cut X has been getting, it was tempting for me to pile on and blame that.

But i had a sense that the Drobo was the culprit. Yesterday morning the fan on the unit went crazy, with all the red and blue lights on at the save time. The fan was on top speed, and would periodically go dark as if it were trying to restart. But it was stuck in an endless boot up loop.

I didn’t shell out the extra money for DroboCare, so I was stuck sending an email to tech support on a holiday. To my surprise, someone answered within an hour. Within a couple of email exchanges, they determined that the problem was fatal, and they would RMA me a new one. I’m grateful for that much, because I purchased mine 16 months ago – so it’s four months past the 1-year warranty that Drobo extends to US customers (EU customers get 2 years).

This morning they notified me that a new unit is on the way and will arrive Thursday via FedEx. I’m crossing my fingers that this one will work, and that all my data will be safe despite the unsafe shutdown it must have suffered when it went down. The nice thing about Drobo is that you can pull out all the old disks (what Drobo calls a “disk pack”) and insert them into the new box (with power off) and turn it on, and it should recognize everything as before. Wish me luck.

**UPDATE** My replacement Drobo Pro arrived within 48 hours. I followed the instructions: with both devices powered off, remove the media from the old drobo, and load it into the new drobo (disk order doesn’t matter, they say – but I put them back in the same order because I guess I’m superstitious that way). Then I stood back, and hit the power switch. Wait for it, wait for it…it works! All my data is safe, and the new Drobo is humming along nicely. I’ve copied several terabytes of data so far (yes, backing up my data to another set of external hard drives), and no problems. Average data transfer with iscsi seems to be somewhere around 60 Mbps, as measured by AJA System Test disk whack tool. My plan now is to try cutting my film on Drobo Pro, but when I can afford it to use Drobo Pro as backup and edit on a Thunderbolt RAID.